He never played professionally in Argentina. Castellanos passed through Chile and then Uruguay until he reached the MLS, where he is breaking it. 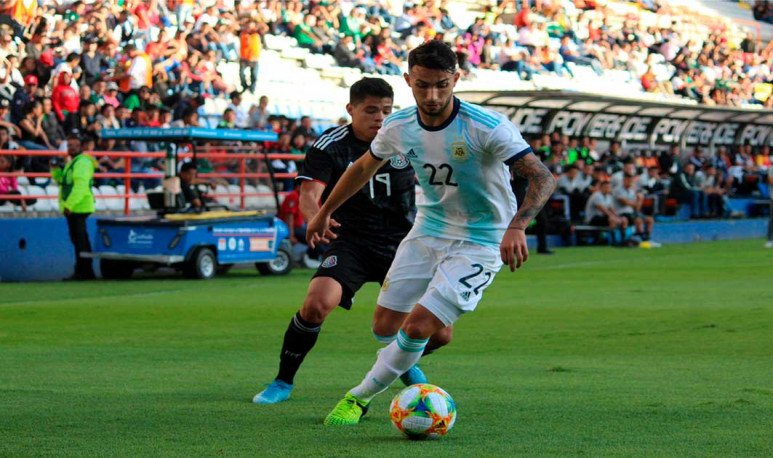 How is it that the man who was the right hand of a certain Josep Guardiola in his golden age in Barcelona, Bayern Munich and also in Manchester City, put attention on an Argentine striker unknown to the eyes of the football world? The story begins with the connection of a couple of clubs linked to the same economic group:  City Football Gr  or  up . The videos of Valentín Castellanos 's goals in the Uruguayan Torque -belonging to the Manchester City family came to Domenec Torrent, who in 2018 went to the adventure of being the first DT of New York FC -another son of City.

The Spaniard made it a priority that he was taken to Manhattan. Valentín Castellanos cares little about this family tree of teams. It is enough to know that Torrent looked at him, that he asked for it and that he is getting his best version in the Major League Soccer of the United States, which now gave him the chance to become visible and that led him to win a chance in Fernando Batista's U23 National Team.

Who is this unknown footballer who could never  play in Argentina  and who is 21 years old wins ground based on goals in the North American league?Taty, as his friends and family tell him, was born in Guaymallén, Mendoza. There he started in the home league, in the Leonardo Murialdo team. Youth DT, Tony Torres, contacted his friend Diego Rivarola, sports manager of the U de Chile, to tell him good things about his chicken, Castellanos.

And that's how, without luck in the clubs of his country,  Valentín  crossed the mountain range at age 17. Before, I had felt two frustrations not being left in River and Lanús. In Núñez he passed the first test, although later he did not prosper. And in the Garnet he was rejected by his physicist . “They told me I was very skinny, I felt bad at the time, but I know they are things that happen,” Castellanos recalls.

Your passage through Chile

In Chile, in addition to its premiere under the main focus of the highest division, I would expect something more intimate and mobilizing . “It was hard for me to leave at first because I was a kid, but everyone told me it was time to make the leap. Besides, just my dad Diego was in Chile... I haven't seen him in seven years. It's a personal story that football closed. Football made me meet my old man again, because he opened the doors of his house over there and I went to live with him and his wife. They were going to send me to the pension, but I told them I wanted to go with him. Thanks to that we reconciled and taught me many things that helped me,” says this San Lorenzo fan, the only professional footballer of five brothers (four boys and one woman).

After debuting for Copa Sudamericana, he did not have opportunities again and decided to look for minutes in Uruguay . Torque club took him on loan in the second division charrua. His so many contributed for the ascent at six months. Already in Primera, he went from end to midfront, and found his position. “There I started to score goals and did not stop.

I like this position better. I'm comfortable and the truth is that I already consider myself 9,” says Castellanos.

And he reveals to his references: “I identify Lucho Suarez's claw, I try to copy that to the Uruguayan. I also like Falcao.”

The jump to the major leagues

Even if he didn't know, at that point his videos had fallen into Torrent's hands. “He loved me at all costs, so much so I had to finish six months before the loan with Torque to go,” says Taty, one of the coach's spoilers along with Maxi Moralez, the star of the team that ended up leader of the East Conference and who will now play the playoffs.

“Torrent got a lot out of Guardiola, but it has its own way of playing. Predicate possession and pressure well up. Obviously he has a guardiologist base, but Dome does a great job of his own and does not try to copy Pep,” he describes his technician. With him he already accumulates 11 goals and 6 assists. “The DT jokes me that next year I will not be there anymore because I'm going to go somewhere else, tells me that I'm for something bigger.

But I am focused on this present and what comes up later will be seen,” he adds.
And this present shows you a big smile when you see him in the clothes from the Selection.

“I wasn't expecting it, I was surprised by this. You always think that one day the chance is going to come because you work for that. The truth is, I'm enjoying the good time I'm having. And now a dream came true,” he talks with emotion and inflates with enthusiasm: “ I want to win a place. I want to put on the team's shirt and don't take it out any more. I'm going to do what I know how to do, what I've been doing in my club. I'm going to defend the National Team to death.”

A mendocino for history

Valentín Castellanos, the Mendoza who can present his story, who barely has written the first chapters, as a perseverance of wanting to be and not to give up to the noise of some slamming. Now the noise does him to make himself visible with his cries of goal.