Renowned artists will gather to honor the immense Tucuman singer Mercedes Sosa on the day of her birth. 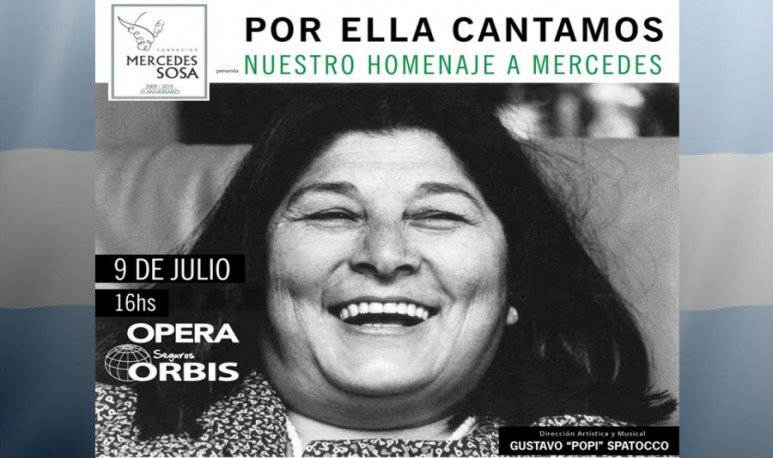 The tribute will be the day when the  performer  would turn 84 and on the way to a decade after her death. The cast will meet to shape “For her we sing, our homage to Mercedes Sosa”.

The concert will take part in the musicians who joined the latest formations of “La Negra”. With piano and direction by Popi Spatocco, Colacho Brizuela on guitar, Carlos Genoni on bass, Ruben Lobo on drums and Beatriz Muñoz in choirs.

The show on July 9 is organized by the  Mercedes Sosa Foundation. The proceeds will be for the full benefit of the entity.

Mercedes Sosa died at the age of 74, on October 4, 2009, as a result of renal dysfunction. He was born in Tucumán on Independence Day in 1935. She was a descendant of calchaquíes, the daughter of a sugar worker and a laundress.

Sneaking from her parents, a young Mercedes won a radio contest for novice singers. In 1962 he released his first album, “La voz de la zafra”. Prefiguring what was going to be the New Songbook Movement.

Then the story is better known. Dumped by popularity and some memorable records, it was censored by the last dictatorship. He had to go into exile in Europe, where he continued his work with great Ibero-American figures of the song. After his return to Argentina in the 1980s, his sound dared to tango, jazz and rock.

Her last work was “Cantora: un viaje intimo” (2009), in which she performed 34 songs as a duet with Latin American artists.

“You weren't planned, we're not looking for you.”