Home People Sports The U19 11th in the World Cup

The U19 defeated Latvia by 74-68 thanks to a large second half, in which it was vertical and aggressive in attack. Five players added in double digit. 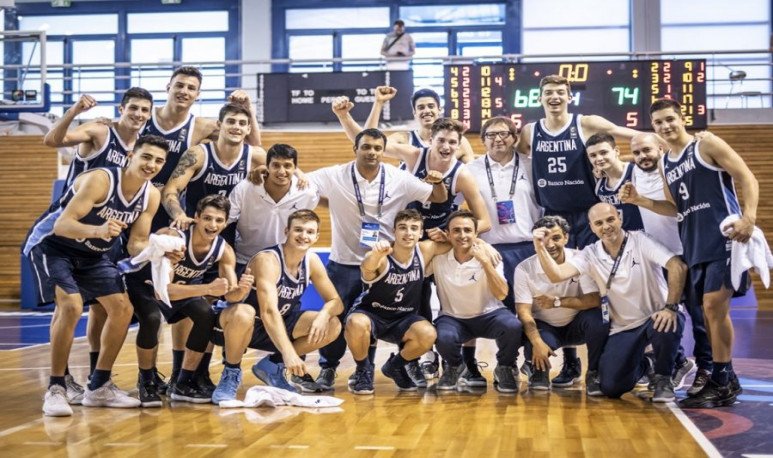 In their latest presentation at the U19 World Cup in Greece, the U19 National Team won a new win. His third against European rivals, and finished the  contest in  the 11th location.

Those led by Maximiliano Seigorman beat Latvia by 74-68. Behind a second explosive time, they dominated by 50-38. Buatista Lugarini, author of 13 points and 8 rebounds, was the top scorer of a national team. That improved its effectiveness and came out determined to attack the rival painting after the long break. Five  players  scored in double digit. Including Juani Marcos's 12 and Juan Fernandez's 11. Although it had no historic final location, Argentina ended with five wins and two losses. The best since the inaugural edition of the competition in 1979.

The match ripped well away from the hoops. Bautista Lugarini started inspired (scored eight out of his team's ten points). Argentina took the lead in the first minutes with a 10-3 partial. Latvia settled and tried to get closer. But the ball movement generated good shots. And it raised an effectiveness in  triples  that consolidated a light of 18-13 at the close of a first partial. Both sets were combined for 23 long-distance and barely 10 two-point attempts.

The second half was the weakest for Argentina. He again experienced defensive problems. Especially in the pick and roll. And it allowed Latvia to take over the leadership. The Europeans got a 17-8 partial to go to rest upstairs by 30-24. Those led by Seigorman tried to attack the hoop more often. But they weren't fine in the contact definitions. Long-distance effectiveness fell, mainly because the guys rushed with some decisions and made branded launches on top.

Around the changing room

Argentina came out with another energy and aggression. That allowed him to reach the rival painting to define or look for the open companion. But at the same time, he got into trouble with faults early. So his rival took advantage to maintain the advantage by adding from the free line. Despite its notorious offensive improvement in the fourth and a large income from Juan De La Fuente, Argentina could barely cut the lead to a double face to the last quarter: 48-46.

In the final chapter, the national cast consolidated its lifted. Showing itself determined and vertically when it comes to attacking the rival painting. He cut off the long-distance attempts. And he showed greater determination to endure contact and get into the heart of rival defense. Thus, he forced violations and put Latvia in trouble of misdemeanours early. Despite the fact that the Europeans came to draw seven, Argentina did not resign until they passed the front with three minutes to play. Two timely bombs kept the European runner-up lurking. But five consecutive points for Juani Marcos and a conversion of Leandro Bolmaro in the absence of 30 seconds unleveled the balance to sign the final 74-68.

With this result, Argentina finished in the 11th location. But with a record of five wins and two  losses . It is the best record obtained in youth tournaments since 6-2 in the inaugural edition of the contest. Held in São Paulo, Brazil, in 1979.