That the province of Santa Fe is one of the best footballers is not new. But there is a small town from which phenomena never stop coming out. 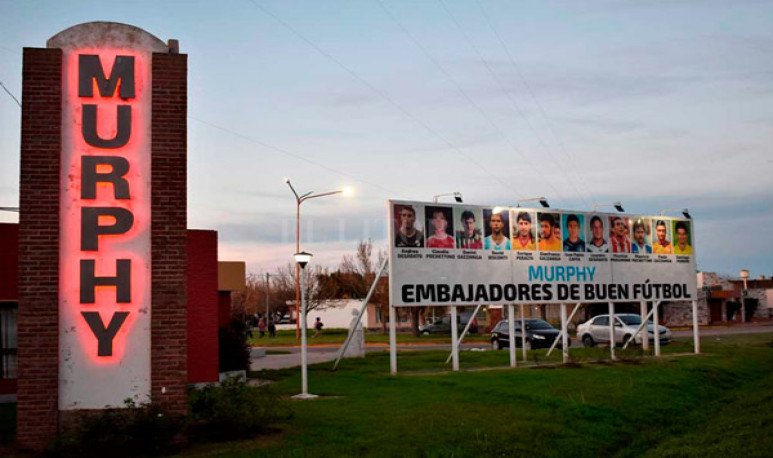 Everyone who passes by Murphy, about  160 kilometers from Rosario and another 380 from Buenos Aires, along National Route 33,  will see that huge sign that says “Ambassadors of Good Football”. It is accompanied by a gigantography of the prodigal children of the locality, the dozen professional footballers born there. The rarity of this town is forceful: In recent years a long list of footballers, who have excelled in first teams of Argentine football, and others who have emigrated to other parts of the planet, emerged from the town of Murphy. In most cases they made  their first weapons on the foot ball at Club Union y Cultura.

Some cities are proud of landscapes or monuments, Murphy, for its footballers. Among the professionals of the foot ball born in Murphy who are triumphing in national and international football are David Bisconti, Juan Pablo Caffa, Mauricio Piersimone, Mauricio Pocchetino, Paulo Gazzaniga and the Desábato brothers.

In the early 1980s, the football school was created in the club.  David Bisconti, former player from Rosario Central, Catholic University (Chile) and Yokohama Marinos (Japan), among others, had emerged from that first litter.

Murphy has not only given elite football players and coaches, but they have also reached the top of national football: the Argentine national team .Pochettino played the Korea-Japan World Cup 2002 under the orders of Marcelo Bielsa. Recently, as a renowned English football coach, he gave the news to his address to Paulo Gazzaniga that Albiceleste was waiting for him.

The third born in Murphy to play with the Argentine national team was the aforementioned Bisconti, who even gave the luxury of using the 10 inherited from Maradona and score a goal in a 3-3 against Brazil.

It is difficult to determine the reasons why so many good footballers have appeared from this small town in the south of Santa Fe.Murphy is something striking. But the facts show that the situation would not have to do with chance.  The reality is that there is a club, which is Union and Culture, that works very well with the inferior ones . Already starting with the little ones, we teach what football is. But a work behavior is also instilled . That explains that from a village of about 4 thousand inhabitants more than 15 professional players have emerged, standing out in the country and other parts of the planet.

Separate paragraph for the  permanent accompaniment performed by the players' families . These are making a lot of effort to get the boys to “arrive.” Keep in mind that they spend a lot of time outside their house. Sometimes they pass months without seeing their parents and relatives. In addition to the sacrifices that this implies, economically, it has a great cost.