Twelve years ago, Diego Armando Maradona stepped on the capital entrerriana for the last time to play a match that aroused everyone's passion. 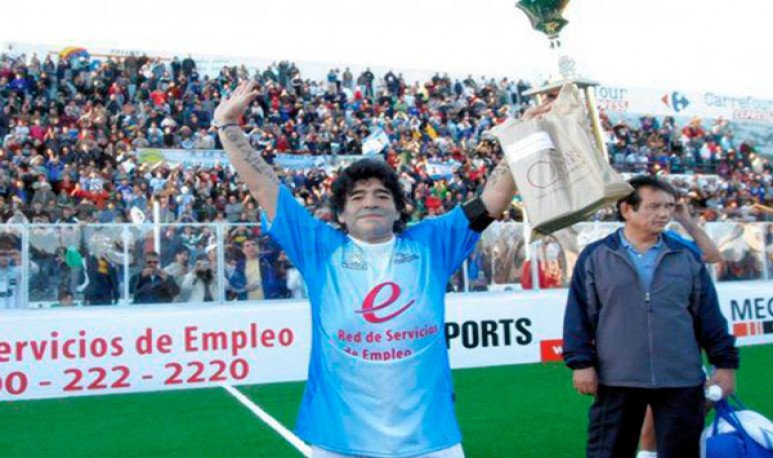 It was running on  July 27, 2008  and the city was on the road for the arrival of the  best player in the world  . As it is a relatively small territory, the presence of the Ten could not go unnoticed.     Maradona  was the central figure of the showball exhibition, a show that gathered figures from the fú Argentine and Paraguayan football . The event was at the stadium  Presbitero Bartolomé Grella of the   Atletico Patronato de la Juventud Catolólica Club  and attended almost  5 thousand people  . He was 47 years old at that time, and logically it wasn't the same as '86. However, the latter did not prevent the excellent performance that made those present cry.

During the day, the star was charismatic and smiling. He was accompanied by  Sergio Goycochea, Diego Chiche Soñora, Fernando Cáceres, Fernando Gamboa, Alejandro Mansuso and Gabriel Amato . Also did  Alberto Carranza, Marcelo Gomez, Hector Almandoz and Jose Turu Flores . There, the Argentine team won by  9 to 6 . Anyway, the result is what mattered least. It's just that the event gave many the opportunity to cheer on figures like the Goyco. Also, to see up close to very renowned former players. But who caught the attention during the 44 minutes of the match, undoubtedly it was Pelusa.

The selected stayed at the Maran Suite in the town, where they gave a very pleasant  interview  . It was Maradona's first contact with the Paranaenses and was observed comfortable and cordial. He responded to everything he was asked and elaborated on various axes that did not necessarily involve football. Before the moment, a crowd was waiting for him hours to greet him and take a picture with him. People who passed on cars and motorcycles did not stop horn and the place  turned into a party . Even, those present began to sing  “And you see it and you see it... the one who doesn't jump is an Englishman.”   At the same time,  Diego  was waving .

Throughout the press conference, the  Ten   didn't shut up anything . He alluded to his desire to be a coach, which actually happened long after.Let us remember that he made it concrete, both in the National Team and Gimnasia y Esgrima La Plata. Although he also directed so many others, how can he forget his passage through Mandiyú de Corrientes? In turn, he referred to Messi and said while each had a different temperament, the rosarino defended the shirt. In addition, he talked about his daughters Dalma and Gianina, where he defined them as wonderful and revealed that he wanted to take care of them always.

At the end of her tour around the city,  Maradona  gave a few words with excitement before retiring.  “ Thank you Paraná for coming to bed this Argentina Showbol Selection. We're very happy. Thank you for coming to the court and it will be forever. Thank you with the heart. We've been treated like we were at home. Bye.”  It was the last postcard that fans and football lovers in the area had del Diez, and they knew how to appreciate it. Today, they witness an unforgettable moment that is worth even more with their absence.