Home People Sports The historic and undisputed idols of Argentine football, honored by the selected U-23

The historic and undisputed idols of Argentine football, honored by the selected U-23

Before participating in the upcoming Olympic Games, where he will be one of the seeds of the specialty, the team led by Fernando Batista rendered a very emotional to Maradona, Luque and Sabella, recently deceased. 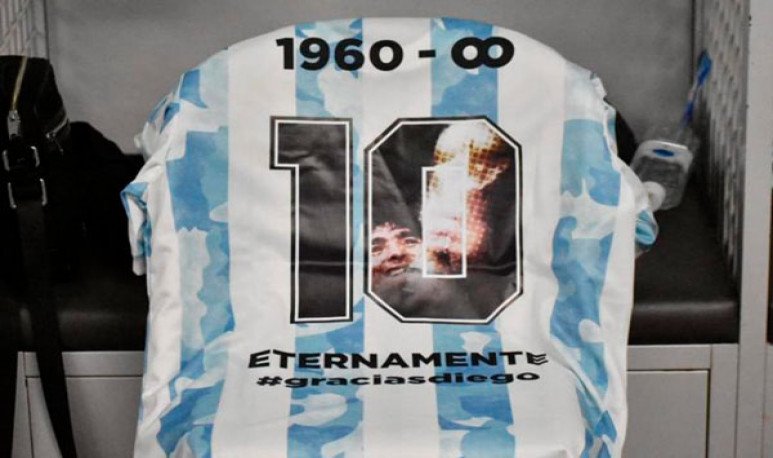 The heart of the traditional Argentinean fan does not resist any more.Those nightmares that were never pronounced as possible, were confabulated in a dramatic sequence where the maximum idols of football died in a very short time. The first flashing, with global detonation and depth within a few milliseconds, was the unexpected death of  Diego Armando Maradona , a news bomb that muted fans from around the world. Almost a month later, the legend of Estudiantes and the Argentine national team,  Alejandro “Pachorra” Sabella , did not stand the arduous problems that afflicted him and his body stopped fighting. The third impact in less than 90 days resulted in the death of Leopoldo Jacinto Luque, historic Union and River striker who became world champion with the Argentine national team on June 25, 1978. Too much for the unspeakable feeling of the admirer of good football, the one who remembers him with firm passion.

It is clear that, since the beginning of the second decade of the new millennium, the consideration of the value that a shirt has for the admirer of a team or player, was changed in tune with the acceleration that marketing applied when it comes to paying powerful tributes to those squads or figures. If we add a passion for national symbols, these transformations provoked immediate reactions, translated into the commercialization of new garments when they appeared on the market. Millionaires sales with the happiness of carrying a universal object that denotes identity and unforgettable memories, soon after happened forced to rethink factories and designers about the mechanics that would mark the new designs. The inexhaustible disappointments experienced in the last 16 years by the  Argentine national team  in different parts of the world, led by the star of Spanish football  Lionel Messi,  did not generate that subliminal feeling that other figures achieved throughout their trajectories, an unavoidable aspect that no one is encouraged to discuss. 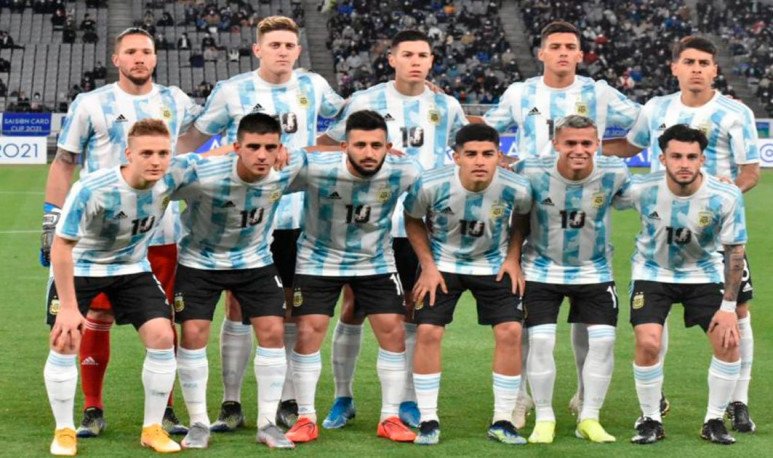 Postponed by the pandemic that struck every millimeter of the globe, the usual Olympic Games had to be postponed for the current season, in the face of the serious health collapse that disabled public activities and the mass presence of people around any kind of meeting massive. Argentina's U-23 team, a semi-youthful formation directed by Fernando Batista, was the diffusional unit chosen by Adidas, to consecrate from their garments a well-deserved tribute to football stars that passed to immortality in recent months. Before the friendly against Japan, the first to prepare for the Tokyo Olympic Games, the Argentina U23 team paid a fair tribute to Diego Maradona, Leopoldo Luque and Alejandro Sabella. This was strategically calculated, in the different facets of a well-deserved tribute that did not neglect any detail. At the moment they hit the court, the starting players did it with the 10 jersey. The press on the back presented several very prominent details, the bottom of the iconic issue had the Ten lifting the World Cup in Mexico 1986, something that was repeated in lower size on the front. On the back, right on the top where the footballer's name usually goes, the phrase said 1960-infinity was placed, while in the lower one read the word “eternally” and the hashtag #graciasdiego.

While the headlines wore this special design, the substitutes were located in their sector wearing the coat 14 in honor of Leopoldo Jacinto Luque, champion with the albiceleste of the Argentina 1978 world championship. Meanwhile, the coaching staff headed by Fernando Batista put on a blouse of the national team, shirt that looked on the chest the term DT, thus reminding Alejandro Sabella, remembered not as a player but for his role as coach in the Argentine team who achieved the runner-up in Brazil 2014 . Completing the tribute to these figures, seconds before the ball was shot and before the initial whistle, a minute of silence was performed in homage to Maradona, because on the date of that friendly were celebrated four months after the death of the Argentinean idol who developed a unforgettable world trajectory. This combination of tributes also added the presence of a huge flag that said “Diego forever”, a situation that coach Fernando Batista referred after the match that ended with the victory of the albicelestes against the home team by 1 to 0. “For us Diego Maradona was a great idol, it was really very emotional to be the first men's team in the country to return to football wearing a shirt in his homage,” such as the statement of Argentine coach U-23. 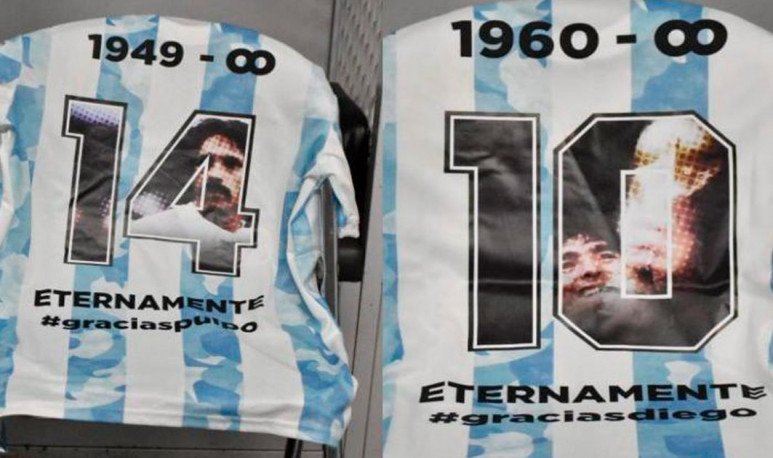 It is important to dwell on the striking background of the t-shirts that the selected team and his technical staff used in this friendly, not forgetting all the images that were used for that evocation. The number ten is one of many trademarks in relation to Maradona and placing it in front carries an implicit message, while the phrase and numbers behind have another connotation. The idea of the year of birth and then the symbol “infinite”, emerged in the marketing departments of the firm that is the supplier of the costume, evoking that famous cover of a record of greatest hits by Soda Stereo leader Gustavo Cerati, cover of the album that had the surname of the musician and the symbol of eternity depicted with that number “eight” lying down, which also with a certain visual point could also be described as a Moebius tape. Diego Maradona's photo, placed in black and white within number ten, is obviously one of the many images captured at the time when the idol of Boca lifted the World Cup at the 1986 World Cup award ceremony in Mexico.

In the case of Leopoldo Jacinto Luque, sports star who died last Monday, February 15, after traveling a difficult health picture aggravated by the spread of COVID-19, the visual memory focused on one of the many photos existing in the 1978 World Cup tournament, the first time Argentina won in longed for world championship, tournament developed in Argentina during the de facto regime existing at that time. Connoisseurs of the immaculate world sports history of the great team that won the famous trophy, naturally remembered that number 14 was the shirt that was assigned to the then striker of River, curious times where the numbering of the players was strictly related to the order alphabetical surnames. In that championship, Argentine players wore numbers that had nothing to do with the position on the playing field.

Paradoxically, Norberto Osvaldo Alonso, the River idol who was summoned at the last minute for that tournament, wore the number 1 on his back, the great goalkeeper Ubaldo Matildo Fillol cut under all three sticks with a diver with the 5 on his back, while Leopoldo Jacinto Luque wore the jacket number 14. Selling after that sports conquest those blouses in business would have been a failure, but today with vintage marketing, those t-shirts would be acquired by fans without the slightest hesitation. It is impossible to forget that as a result of public pressure, César Menotti brought Beto Alonso into the debut match against Hungary, final minutes of a tied match where a genius of the riverplatense star with Luque resulted in Daniel Bertoni's goal, visual sequence where the taco Skilled midfielder hypnotized local television, a team of cameramen who followed the player “number 1”, even though the goal had been scored by another teammate. Without Alonso, Argentina would not have passed the first phase of the tournament, a detail that football specialists recognized over the years very much to their regret. 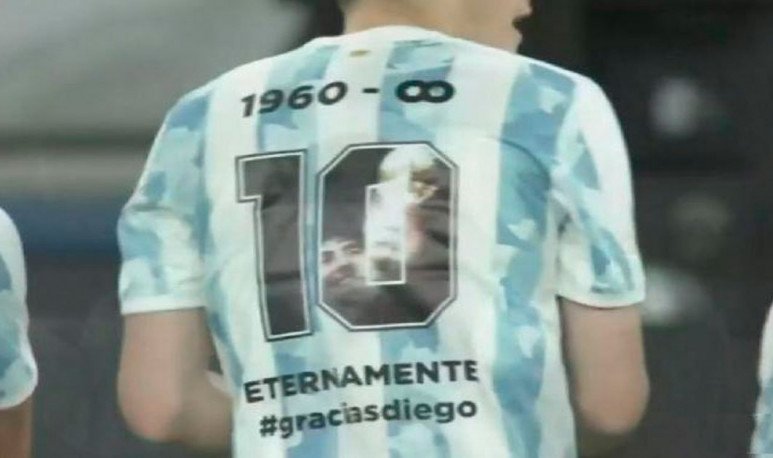 The idea of placing the image of a player on a shirt, blooperescally did not come from an idea originally arose in the department of the German firm that provides clothing to the Argentine team. The memorious ones will remember that in mid-2001, after the death of the quarteter singer Rodrigo “El Potro” Well, Belgrano de Córdoba's team a few weeks later premiered two models of t-shirts that had the face of the singer on their forehead, an idol from the Mediterranean zone. which naturally had the approval of the AFA, around the tragedy that occurred with the musician on the Autovía Buenos Aires-La Plata, where young actor Fernando Olmedo, son of the best Argentine comedian of all time, lost his life. Since that implementation that the Cordovan team concrete in the local tournament at that time, the clothing companies began to pergeñar some special t-shirts where the image of some sports figure of the institution that wore it was included.

This tribute to the recently deceased Argentine players, is also a way of paying tribute to the values or elements of national culture that are of interest to society in the current times. The memory of the most important footballer in the country who achieved demolishing worldwide recognition, is the result of a historical installation in which foreigners always being consulted by our nation, always mentioned the surname of the crack that stood out in Argentinos, Boca, Barcelona and of course on the Italian team of Napoli. The idea of using the front of the shirt that players use in matches, image that television and photographers broadcast for their technical structures, also served in recent hours for several teams of the Argentina Football Cup formerly called “Copa Maradona”, they would place visible on their chest a special image of the Falkland Islands, having commemorated another anniversary of the partial recovery of the Argentine archipelago, placing below them the year of that landing and the current calendar that we travel. There will be time to continue talking about the sudden changes in football jerseys during the start of the new millennium, the result of marketing and the famous sports passions (continue...).