You never know where we're going, but the important thing is to remember where we came from. This River player knows and proves it. 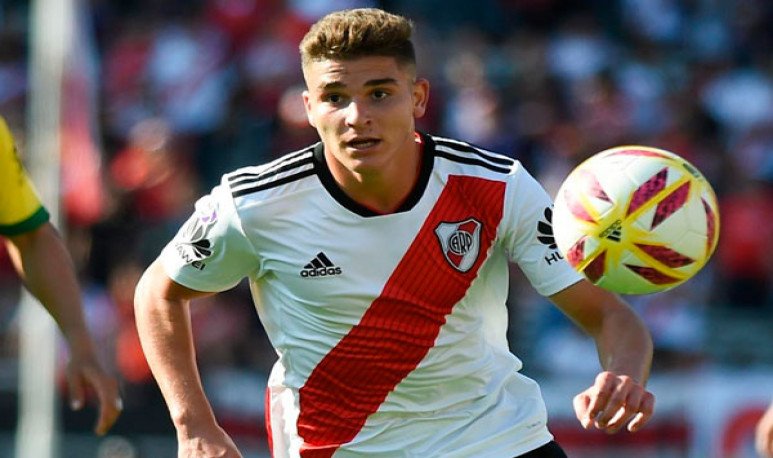 It is the story of one of the star players in the province of Córdoba.  Julián Álvarez triumphs  in the world of football , but he never forgets his roots.  His first coach attests to this and tells us an episode that shocked us to tears.

Julian Alvarez was born in Rio Segundo,  where he took his first steps ... or passes. From the zero minute in which he began to devote himself to this discipline, it became known that he was going to succeed.  He debuted with River, with Marcelo Gallardo, in a match against T .Julian beats match by game and  does not disappoint anyone. Not the swollen, not his team . Suddenly, he finds himself  playing against the biggest ones  and wetching the  river plate coat.  But the kid didn't get the smoke to his head . Perfectly remember where it came from and how it came.

So, after reading an interview with  his first coach at   Club Atletico Calchín , Julian decided to have  a unique gesture.  He wanted to give  an unexpected gift to the first figure he had as a reference in the field of football.  And this fact moved his entire hometown, since  in Calchín, even the xeneizes shout the goals of the Spider.

A goal from the heart

The vienteañero  is known as  La Arañita  and gave him a van to help him with his work as a distributor of different supermarkets in the area.  “ Julian called me on Saturday night. I was on the phone for ten minutes and couldn't tell him more than three words. I got excited, I cried. I've known him since I was kid.I have a friendship with the family for years. From a kid he did all this to keep this present,” says Rafael Varas.  He was the first technical director  of  La Araña  at Club Atletico Calchín.

“ I am a public employee,  and in the evenings I sell him to supermarkets. I have a car that was small for me for so much merchandise. On Friday I talked to Julian's dad about his present, and it is seen that he later talked to Julian and Saturday I was surprised with this. I never would have imagined this. It's something that fell... the father called me and said 'I'm going to your house . ' He came horning and opening his arms.  I didn't understand anything . I cried a lot. It was 10 at night and we were still hugging.  The joy was very great. What I'm living...  I don't have words to thank you.  At night, Julian called me. I was waiting, so as not to disturb him.”,  commented the honoree.

Rafael Varas and Julian Alvarez  met a long time ago.  His DT trained him since the  player was 2  years old. And he saw it grow, step by step. About little Julian says:  “He was going to accompany his brothers. He was always with a ball, which at the time was bigger than him. Then, when he was 3 and a half or four years old, he started with me. I had it until I was 12, when I left the club. He was a person like he is today, but in miniature. A   very quiet person, very responsible, focused.   And he played the ball very well, as he plays today,” he has the tone that gives nostalgia.

Varas e s a humble and good-hearted person , that is noticeable from his speech and his position around the player's gesture.  “ I was not his teacher, only someone who crossed his way. I'm grateful he's doing this. His gesture is huge. What can you teach a player like Julian? You can advise, yes. But this is amazing. He's a wonderful person.”

Rafael tells that Julian had already had admirable gestures. I had given him  an autographed shirt , without the DT asking him.  With these small and giant gestures, Julián and Rafa  have a special bond to this day.