I understood that these hated beings are human beings. Like any one of us, hey! 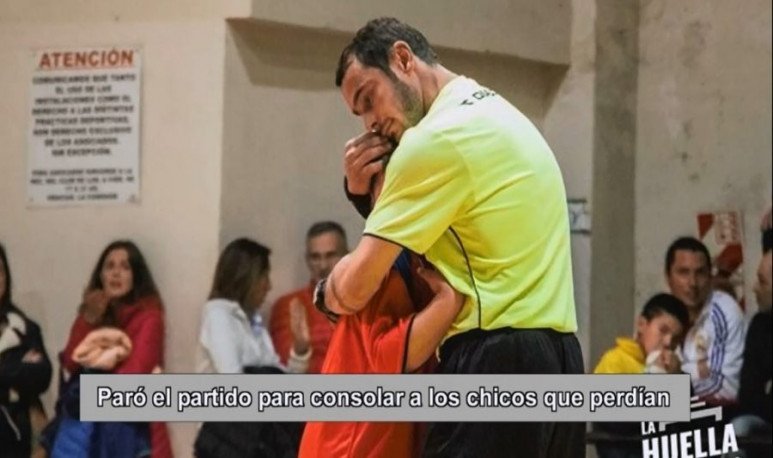 By: Miguel Bossio
I'm Juan Carlos Alt@na and I'm going to say something arbitrary: I've always been outraged by referees, but in the last few days social networks have made me change my mind. Is that wrong? After all, I'm Argentine... Sick of San Lorenzo, that's what I am. Sick bad... To the point that the water tank of my house is painted with the colors of the Raven. When there is a match, I either go to the New Gasometer or I look at it at home. Now that they kicked the dollar into the stands, I stopped paying Netflix and canceled the Spotify subscription for the kids, but the 300 and a half pesos that football comes out on TV I still pay. I am capable of depriving myself of the barbecue, but I could die if my eyes with glasses do not see San Lorenzo. "They put glass on any ranch," a colleague from the verification plant charges me when I wear my glasses. I'm 46 and I work doing VTV in the suburbs. By the way, I once hooked him up to a line judge and refused to check his car because of an offside that had charged Beto Acosta against Lanús. But on the last date of the Super League nobody told me: I saw clearly in the Nuevo Gasómetro that Enzo Pérez's penalty was bigger than the devaluation. And since it was River, the referee Baliño didn't charge it. I blew it in 24 colors, 180 degrees, 365 languages. I told him everything: "Corrupt". "Miserable. "Buchón de Chiqui Tapia". We tied 1 to 1. I went overheated. When I got home, my oldest son told me that on TV he saw the hand of River's steering wheel. This weekend, the youngest was playing a volleyball tournament at school: I was still so wrapped up that I protested to the poor referee. The teachers and other parents couldn't believe what they saw. Much less what they heard. Yes, a piece of paper of mine, totally taken out to the side of the net. Speaking of networks... As Twitter takes me out of the boxes, I opened an Instagram. And there, following a sports journalist who is similar to Horacio Elizondo and who wrote the biography to Héctor Baldassi, I found a couple of photos that made me reflect. They were of a referee hugging a crying baby. The first thing I said was, "Uh, look, these guys have feelings..." Something incredulous, I started to read what it was about. In Lobos, 100 kilometers from Buenos Aires, in a children's soccer final, the team that won ended up losing by a landslide. And as several boys began to cry, the referee stopped the game to console them and, in the process, to stop them scoring any more goals. He embraced them paternally, one by one. There I threw the irony into the garbage can, lowered three changes and understood, reading this episode, that these hated beings are human beings. Like any one of us, who... Daniel Gelvez is the name of the referee, who is also a bricklayer and also a father. Santino is the little guy in the photo. I got hooked with the comments in the publication: most of them were compliments, like the one made by the mother of the archer of the team that lost. Long live Fair Play, others wrote. But of course, Argentina Siglo XXI, was mixed some picaresque comment of a fan of Boca that, returning to the penalty not charged in San Lorenzo-River, said "It is missing that Baliño gives a mimito to Enzo Perez. Ready, from the gesture of this referee of infantile football, I stopped hating the men of the whistle. What's more, I got interested in the subject and I copied reading a text by Alejandro Dolina about Colorado De Felipe, a "too fair" referee. What's more, I recommend you: come on in and read these paragraphs from "Crónicas del Ángel gris" (Chronicles of the Gray Angel). "De Felipe not only evaluated plays to see if he sanctioned any infraction: he also weighed the moral conditions of the players involved, their personal stories, their sporting and spiritual merits. Only then did he decide. And he always tried to favor the good ones and punish the scoundrels. "I was never going to take a penalty from a decent and honest defender, not even if the man took the ball with both hands. On the other hand, the perfidious, lazy or lazy players were punished with each intervention. He believed that his whistle was not at the service of the rules, but to fulfill the noble purposes of the universe. He aspired to a better world, where the melancholic children and dreamers are champions and the cancheros and compadrones go to the descent".

Medicine with herb ( the one that's back)

Here it's rare for a Latin American to see so much cement without a green.