Home People Sports Soldier of the ring, legend of the KO

We tell you the story of one of the Cordoba boxing icons. A brand of Argentine sport that beats and fights in our hearts. 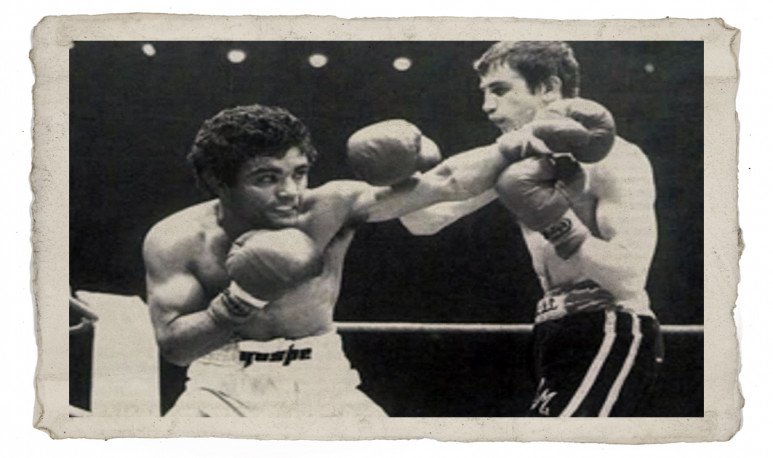 Santos Benigno Laciar was born in Huinca Renanco on January 31, 1959.   He lived for years, along with his parents, from the vegetable garden and cattle. His childhood passed without incidents or child violence.  The grandmother called him “Falucho” , referring to that black soldier who belonged to the army of General San Martín, and  who defended the Argentinian people  . That name would be the beginning of a legend , as it would consolidate itself as a  soldier of the Ring.

Soldier of the ring

“ Falucho” debuted as an amateur at the age of thirteen.  He came to retire with over eighty fights and only two lost.   He made his debut on the rented field on December 3,  1976  , beating Carlos Maliene by KO when he was  only 17 years old.    That was the beginning  of an unforgettable and uninterrupted journey  to the top of the planet boxing  .

“ Falucho” was the first Cordovan world champion with only twenty-two years old.  Throughout his entire trajectory, he  fought more than once a month, training every day as a Spartan soldier. He was never knocked out or dizzy in his boxer career  . Legend has it that  for this boxer there was no antidote to  turn off his endless energy.

The exploits of the soldier

He won his first Mosca world title on March 28, winning Peter Mathebula for KOT 7. Santos Laciar  was made of the same belt as  Pascual Perez and Horacio Accavallo wore. With Monzón and Loche retired, Galindez deceased,  a new national hero was born who would leave his way through the discipline of boxing well.

Laciar has established itself as one of the strongest champions in our history.   He hurt with left volley, ascending entering the short distance, right on hook, always hammocking and unloading with viciously. “Falucho” weakened by accumulation, by stacking work. He didn't stop.  He defended the glory and honor of national boxing in Japan against Shuichi Hozumi, in Korea with Hi Sup Shin.  The stories of his fights  are magnificent and stained with magical factors,  his ability was paranormal.

He beat Ibiris and Gerez, beat Ramón Soria, beat Raúl Perez and lost to future world champion Super Mosca Gustavo Ballas.   His attack was threatening and continuous.  He was a guy who  didn't give his rivals respite or rest ,  a real life fighter.   In the 1980s he started with his intense boxing. Laciar, for the time , won the Argentine title Mosca against Miguel Ángel Lazarte by points on February 27, 1980.   That same year, on November 22,  the South American beat  Chilean Jaime Miranda in Carlos Paz.

He is sixty-one years old and retired with  101 professional fights and an  official record of 79-10, 32 KO . He was  twice world champion Mosca and a Super Mosca.    He is the best Argentine boxer  of the 1980s. He won  the Gold Olympia three times  in a row. And, for many specialists of the most violent and exciting sport in the world,  it is “The 5th Big” of our rich and illustrious history.  He became a  two-time World Boxing Association champion in the fly category in 1981 in Johannesburg, South Africa and 1982-1986. In 1990 he received the  Konex Platinum Award as the best boxer of the decade.

Soldier to the finals

The end was approaching when he began to lose, once only by points with Colombian Jose “Baby Sugar” Rojas in Miami, and also with Gilberto Román at the legendary Forum in Los Angeles.   On December 21, 1990 he fell by points against the undefeated Hugo Soto and decided to finally retire from professional boxing.  Today he is turning his years, with his head to full,  fighting battles of life . “Falucho” is a happy grandfather, who teaches boxing. He plays football with his friends and he, from time to time, goes for a run.

From Ser Argentino we wish you a  happy birthday!