We tell you the story of a player who breaks her on the court and breaks her at the academy. This midfielder lawyer comes into play with honors. 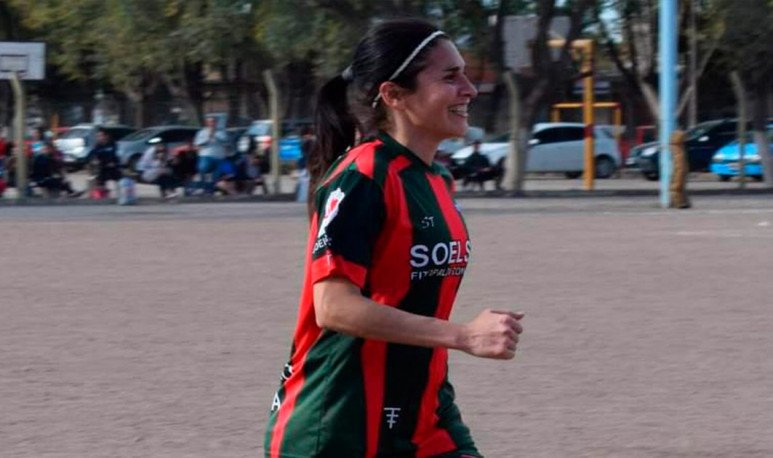 She is a midfielder  who, in addition to having the title of lawyer, is a referee of a very particular team.  Antonella Brandalise  graduated in 2013  with honors  from the  National University of Córdoba  and at  Club Atlético Las Palmas  has the title of best midfielder. She is a woman who performs with equal quality and greed on the court and in court.

She is  passionate about football  and her area is midfield. At 31 he became  leader and benchmark  of  Las Azules  de  Las Palmas.This Club that, since 1933, has been part of the   hearts of Cordoba. With the jacket that has the number 5 or 8, in the colors blue and red, Antonella Brandalise moves like a fish in the water on the playing field .  In his childhood he discovered  his love for the ball  and never abandoned it again.

His first moves  go back to the streets of  Barrio Parque Liceo,  where the asphalt was a good place for a  picadito .  At only 7 years old,  Antonella played with his brother Luciano and his cousins Maxi, Daniel and Pepe. She was the only woman who joined football and broke it.  “ Football has always been present in my life, my family is very football and since I have been playing 7 years old,”  the player tells  the media.

The current captain  of  Las Azules  from the old road to La Calera plays football since she has use of conscience. As he grew up, he began to think about  institutionalizing his favorite sport. He began to play 7 football, passing through  different clubs. For five years he has been part of Club Atlético Las Palmas .  And, today, he's the star of blue and red. He plays with claw and passion, especially when he faces the classics:  Club Universitario  and  Argentino Peñarol. The team , made up of more than 25 people , is directed by Alberto Palomeque and Daniel García .  And they have Anto as a reference. The player tells the media that she  became an exponent of Las Azules  because  “I'm tired and I'm always there to encourage them to continue playing, not to give up”.Thus, with  the strength of a leader,  the knowledge of an academic and the passion of a player, Anto breaks it on the court .

The Doc of the court and La Docta

The pseudonym  with which we refer to our province of Córdoba is “ La Docta ”. The pseudonym your teammates are addressing  Anto is “La Doc”. I mean, on the court, Anto Brandalisse is “The Doc. ”  At university,  she is a graduate with honors. With these two characteristics this player is constituted as a   scorer with honors.  On the court , she's captain .  Outside it, he is dedicated to working  independently  in the area of  labour law,  although he also has experience in  civil law.

Received in 2013. With honors for  never disapproving a final exam  and keeping an average worthy of recognition. It should be noted that the  Faculty of Law of the National University of Córdoba  is one of the  most massive. Students from   all over the world are pursuing a career in law, so the  competition is high and the demand is higher.However, Anto managed to receive his title in a distinguished manner .  Because whatever  this  champion  does   the does in an excellent way. With honors he receives his title and in the same way he plays as a midfielder.