Old are the rags.

These old tennis players have nothing. With over 65 years, they represent us in World Cup. And the ladies of +80 were left with a title! 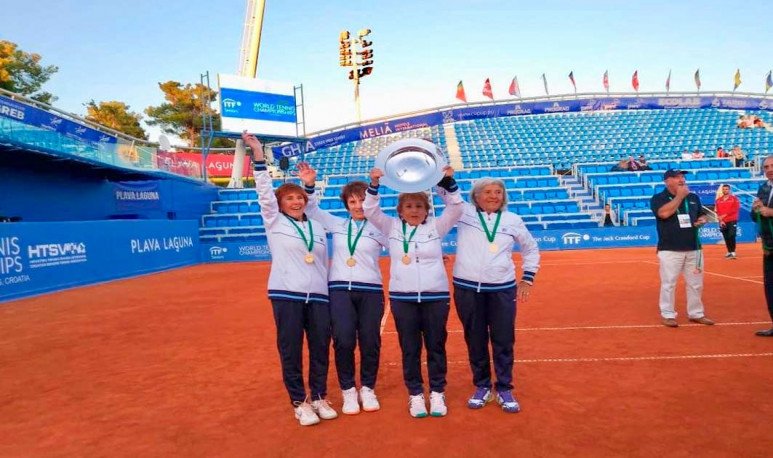 The Super Senior World Cup confirmed that in  tennis , at least, old are rags. The women's quartet won the highest title. By imposing France 2-1 in the final.

Argentina  climbed to the top of the podium of the Super Seniors World Cup held in Umag, Croatia. Thanks to the outstanding performance of  women  +80. The  team  was made up of Gema Bare, Dora Romero, Irene Bonfante and Vivian Flint.

A total of 10 countries participated in this  category  , which were separated into 3 groups. Argentina joined Group C with Canada, South Africa and Germany. In all three clashes, the national representatives demonstrated a great game in doubles. Where they knew how to make the difference necessary to get their victories.

After passing the first phase, the Argentine representatives agreed to the final round. They shared with the winners of groups A and B, the United States and France. As they had done in the preliminary stage, they defined both series in the doubles. Always formed by Romero and Flint.

“All the meetings were very even,” said Dora Romero. Number 2 of the individual ranking +80 of the Argentine Tennis Association. And who this year reached his best position in the world rankings (6). Dora ended the competition undefeated. After playing singles and doubles in the five series that the  national cast faced.

Romero mentioned that his victory against Germany's Nanda Fischer, who is number 5 in the world in the category, meant a good mood for the following days of competition. “They were all very hard matches. The other teams were amazed that we won the tournament. Because we have always gone further behind,” he added.

The Argentine delegation presented teams in the following categories: W+65 (11th place), W+75 (9th place), M+65 (22nd place), M+70 (11th place) and W+85, who could not complete their participation due to the indisposition of one of the squad members.

All our respect for these old men, who are a pride for the country.

Nobody hits you a tube anymore...

Can You Do The Good Way Without T.A.C.C??