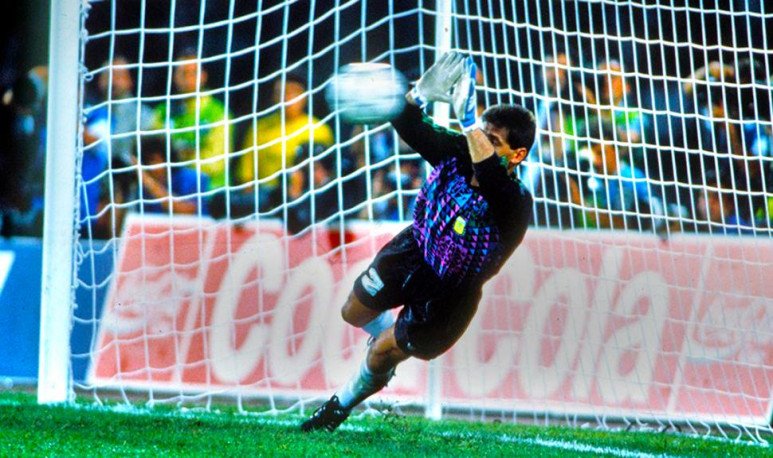 We had left in  Cani's goal to Brazil , which deposited us, without deserving it, in the fourth against Yugoslavia, at that time a tough rival. 0 to 0 in the 90s, same result in lengthening.

And here, the one who lived it remembers, even if he was 4 years old in the 90s, Goyco became a hero. I came from  Racing , a rather mediocre goalkeeper, I remember the talks with concern that were given everywhere after the injury of  Pumpid . In the World Cup, he had taken a couple of good balls against Brazil (he had also been quite lucky, something fundamental for a goalkeeper) and against Yugoslavia there had not been any zozobra.

In penalties, Serrizuela puts the first and for them kicks Stojkovic, who comes playing like a champion and even plays a game at the point of the penalty. Goyco trout is terrible. Look for the video on Youtube and look at the face that the penalty shoot starts with and then look at the face it ends with. In 7 minutes you can see very clearly the process of transforming man into legend. Well, we're still with Stojkovic. It kicks  almost  perfect, but that is almost very important and it is the difference between it between  the  angle and sticking  at the  angle. Outside. 1-0 Argentina.

Burruchaga puts in 2-0. The Yugoslav makes his own, 2-1. And here begins the epic. He's got to kick  Diego , who, don't forget, had won himself against Brazil (well, Cani scored the goal, let's say Diego scored 80%). Erra: D10S can also be wrong (being honest, he kicked it very badly). Kick the Yugoslav, put in. 2-2. Kick Troglio and hit at the opposite angle where the Yugoslav had stuck. I remember here that I thought we'd lost. We were still 2-2, but with one more penalty and having missed two consecutive ones, including Diego's.

There was only one way to win: if Goyco would cut off the two left. Kick Brnovic. Shortdown. Now you have to put Dezottiel in yours. He kicks it masterfully: 3-2 Argentina.

If  Goyco  will cut it to Hadzibegic, we pass. You don't know what happened? A legend was born. Really, I insist, look at these records on Youtube if you need a bad day to happen to be a good day. Sergio's masterful maneuver and the subsequent euphoria in the celebration with his companions reminds us that everything is possible if we put gut and heart on him.

If we do the numbers and we don't think only about the heroic shortcut that I remembered, in general terms Goycochea was kicked 11 penalties in Italy '90: he cut 4, one hit the stick against Yugoslavia and turned him 6. In the definition with Italy, before they were cut off to Donadoni and Serena, they were almost taken out to Baggio and De Agostini. With Monday's diary we can see that the hero's seed was brewing little by little.