Nacho came to Australia a year ago. He managed to play rugby by chance. He set up a big quarantine and came out champion. 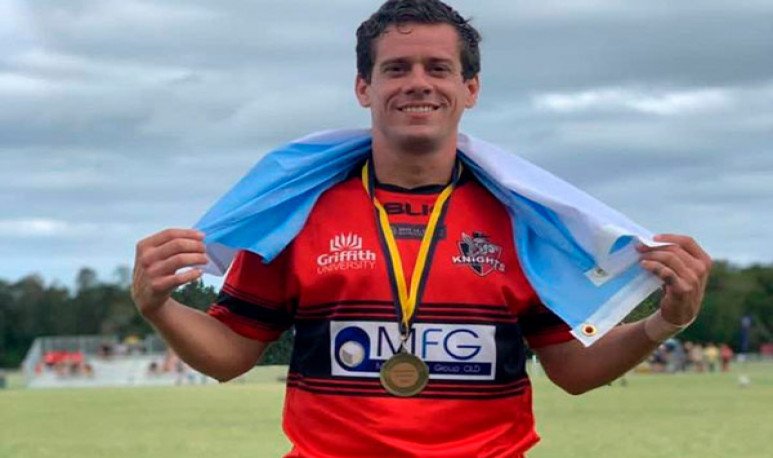 One of the Argentine cities where rugby is Rosario. That's why it's not unusual for a Rosarino around the world to look to play with the oval in a club in the country where he is. What is incredible is to be able to become  a champion in one of the world capitals of this sport, shortly after having arrived and after having suffered the terrible confinement of COVID-19.  That's the story of Nacho Foyatier, this rosarino champion.

Rosarino Ignacio arrived in Australia in February 2020. After looking on its balcony to a park in the city of Gold Coast, the destination gave him the opportunity not only to meet new friends, but to be able to play rugby again.  It is the sport he practiced from a very young age until reaching the upper squad in Atletico del Rosario .

The idea of Nacho's trip was to make a life experience and improve his English level. Australia was the destination chosen, because of the landscapes, the climate, work and because it is always said that, in addition, he wins very well.

That afternoon of “mob” out the window, Nacho saw a man trained a little man with cones, balls and implements that are used to train rugby. “'This is mine,” he thought. I needed to talk to someone and ask them where to watch games.  I wanted to get closer to the world of rugby, meet people and get together. All things that, being in another country, are never an easy matter.

After cheering up and approaching to chat for several minutes, came the capital surprise: That man turned out to be Matthew Taylor, former player and coach from Scotland , who since 2019 is the coach of the Wallabies defense. Yes, from Australia's national rugby team, one of the three biggest world powers of this sport.

The oval on the horizon

Nacho returned from that match with the promise they were going to call him to join a rugby team, but  he did not want to make many illusions.   To surprise, two weeks later he received the long-awaited call. A leader of the Griffith Knights Rugby Club asked him several questions and facts, and told him they had him for the season.

Again I had to wait for another call for the first training. And the cell phone rang again. But this time he was a certain Richard Kingi and when the encounter with Richi occurred, in the talk, the Australian told him where he had played and in the middle of the story, knowing Kingi was Argentine, he confessed to him that he had a friend named Martín Rodríguez Gurruchaga, who played together in Stade Francais. For Nacho it was like getting home again, since Martin is a lifelong friend.

Rosarino went on to join a well-international team . His companions are from New Zealand, Samoa, Tonga, Japan, Fiji, a Basque and he, the only Argentine.

As if it were just an anecdotal fact, Ignacio Foyatier ended up being champion of the senior rugby league from that Australian region.   The same year he arrived, after months of coronavirus quarantine.

Nacho says he was pleasantly surprised by the Australians. The kindness of the people and a great sporting cordiality is what the rosarino stands out most.

As for future plans, Nacho  misses his family, but does not plan to return in the short term . He's an architect, and he's working well in Australia. Meanwhile, he has time to do what he likes the most. He plays rugby in a team that has the colors of his passion of rosarino neighborhood: the red and black of Newell's Old Boys.