Brief history of the early years of Boca Juniors, the pride of La Boca, a neighborhood that turns 150 years. 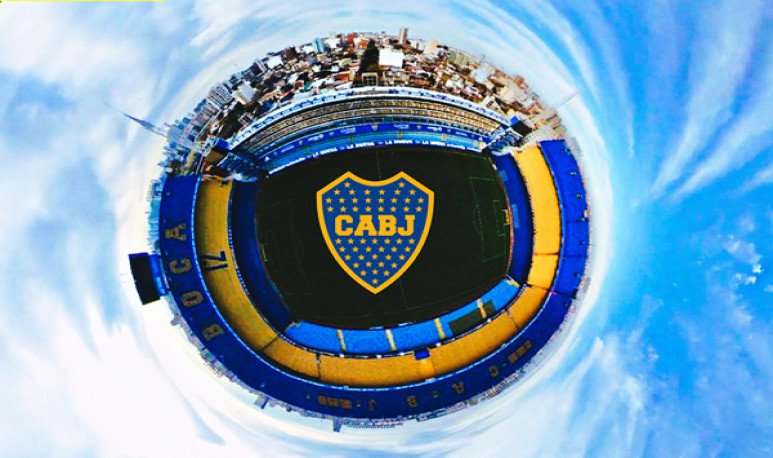 Only thirty-five years after  boquense autonomy  would be born the  club  that identifies him in  football,  and beyond, with the "  Dale Booooo “. If  Boca Juniors  is a feeling that can't stop, much is due to its neighborhood club roots. Not from any neighborhood, of course. One that has a soul of its own, distinct and distinctive to any other in Buenos Aires, and that dyes the  blue and gold  coat since 1907. “There are enough people to form a club,” Esteban Baglietto, first president, Alfredo Scarpatti, Santiago Sana and the Farenga, Juan and Teodoro, were founded in the boquense  Plaza Solís  a summer in April. In a square between conventillos was born  Boca Juniors . Italian blood, Genoese passion, ran through their veins, and they were about to call the brand new institution “Star of Italy”. Another alternative was “Defensor de La Boca” and ended in  Boca Juniors  , with the added juniors , the fashion of an English phlegm sport that masters and railroad workers from La Corona brought to the pampas. And that they would lose forever among gambetas and creole picardy.

Let's agree that calling institution is a way of understanding each other. Boca was in the same situation as the clubs formed in the golden burst of 1901-1908, and that lit on the side of the Riachuelo, later called Five Grandes — plus Hurricane. Humble civil associations, supported by huge neighbourhood solidarity spirits, which in our case were predominantly workers, distributed among dockers, barraceros, car drivers, tanners and other sea trades. A lot of work and little time for leisure. However, in the times of the  Alumni  's gallardy there would be extradeportive circumstances that helped the  birth of Argentine football,  supervisor of the first aristocratic phase. Sunday rest and despretige of the Basque ball, previous Buenos Aires passion disgraced by “arrangements”, together with the closure of the popular cockfighting, stimulated the practice of football among popular sectors. Let us not forget also the moralising campaigns that were crossed from the Church to the socialists and anarchists, who aimed with sport to remove the poor from the vices of the “big cities”.

There appears  Boca Juniors  with an overwhelming initial force, more than 200 members within a few weeks, which includes a neighboring Independencia club almost annexed, although lean income was a daily problem. “A. Farenga proposes that, in view of the fact that a friend of his could do the nets without charging anything, he asks that the thread necessary for that object be bought, which is supported, but the latter is ineffective because Mr  Brichetto  states that he was going to give away the thread necessary for that work. Mr Cerezzo then states that he will give away the needles necessary to weave them; and then Mr Sana says he will also give away a piece of net suitable for the case”, is established in that act of club the Franciscan poverty of the nascent sport passion of crowds. If Farenga's sister, Manuela, cooked black strips on white t-shirts from the first matches! They started on the right foot with a victory over the club Mariano Moreno by 4 to 0. And  Brichetto  was not only going to give the thread for the nets of the bows that cut off the balls of tiento, those of hand-cooked leathers weighing a ton wet, and were dangerous in the opening of the beak. For them the players wore berets until they were forty. It was not about to dissolve when nodding, but to avoid the terrible cuts on the forehead. Our  Brichetto was going to give him, along with the thread to the club of his loves, the definitive colors when he brought the solution inspired by a Swedish steam.

We already have the club, which had several venues in its first steps, including  Baglietto  's same house in front of Solis Square, and we have the shirt painted blue and yellow, although at first the option was exactly the reverse. A little problem in a  Buenos Aires  that was already beginning to leave few gaps, few paddocks. First he went to the side of the South Dársena, between Pedro de Mendoza, Colorado, Senguel — today Perez Galdos — and Gaboto, who didn't even have changing rooms, stands, and players had to be changed in a neighboring house.

The Argentina Football Association, antecedent of the AFA, demanded measures on the path of professionalism, which would take about twenty more years to reach Argentina.  But it was already the time of “Marronism”, as the sports oligarchy called it contemptuously, and players begin to receive some retrition for their services interspersed with hard working days.  Boca  had to settle on Demarchi Island, behind the Carboneras Wilson, on tax grounds and soon was evicted by the same national government that had given them the site. They had invested in works the fortune of 10 thousand pesos, a chimera for any Boquense family, and who reunited with the thousand members. Wilde has a fleeting step as a milestone for the court, the members pass from 1500 to 300 through the distance, the heart of the club is  La Boca,  and the operational return triumphs in 1916 with the court of Minister Brin and Senguel, who uses the grandstands brought from Avellaneda. Five years after he got the current plot of Brandsen and Del Crucero, where the  Bombonera was  built in 1940.

For the twenties,  Boca Juniors  walks its swollen on the rival courts, perhaps the first in the modern sense.Because the  “Player Number 12”, “La Doce”, “Half plus one” , was a total novelty with his  xeneizes that invaded the stands with drums, cymbals, flags and, yes, the small bar that arenged with his songs. And came the puffy boquense with an original idea where the fan does not play a passive role, encourages players to rage and, in addition, must defeat rival swollen with all the artillery of a proto merchandising, with the colors of the club, and the spark of their chorus. And it is encouraged from minute zero to ninety, without moving from the stadium, something anyone interested can check on any Sunday at  Alberto J. Armando stadium. Another general feature of the  Argentine fan is his love to show rather than sport, it is not the majority who practice football, although in Boca hadsince the beginning the open doors, as attested by the lower divisions developed since 1908.

From the mythical years with the captaincy of Juan Antonio Farenga followed the championships of 1919, 1920, 1923 and 1924, those of the goalkeeper Americo Tesoriere, the banner Pedro Calomino and the egg, egg by Alfredo Garassino. And the 1925 international tour, the first of an Argentine team, who won 15 matches and loses only three, on courts in Spain, France and Germany. To contextualize at the time it is comparable with Ángel Firpo's boxing triumphs in the United States and the Uruguayan victory at the 1924 Olympics. Something was happening in the Rio de la Plata and  Boca was carrying the Argentine flag to the world.