One day like today, but in 1997, Loco Martín Palermo scored his first goal with Boca's jersey in the 2-1 victory against Independiente for the seventh date of the Apertura Tournament. 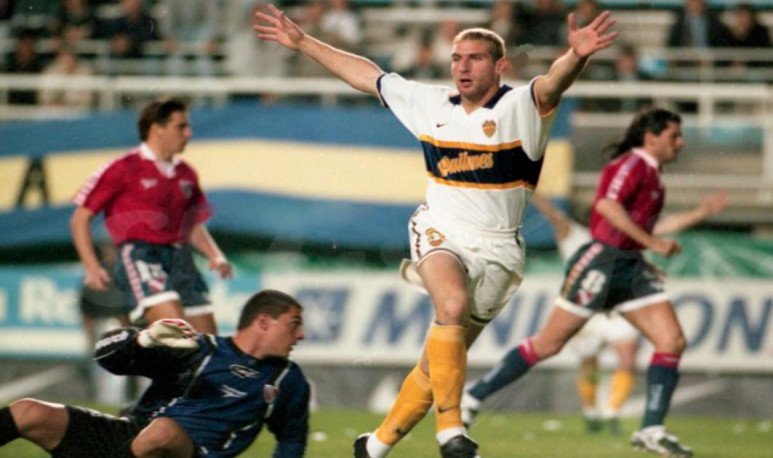 Martin, a native of  La Plata , made his debut in  Boca on September 3, 1997 in a 1-0 victory against  Cruzeiro . The train of yawning goals was made to wait skipping some stations, that is not converted, (Newell's, Velez, San Lorenzo, Colo Colo and Estudiantes) but managed to tackle it a day like today after scoring for the first time in La Bombonera, the minute of starting the match against  Independiente . Later that same train painted blue and gold, guided by  Carlos Bianchi , would be extremely punctual to arrive at the stop of the historic top scorer where Martín Palermo would get off with his 236 goals in 404 matches played and being a legend for the club.

The football race of the “optimist of goal” has been riddled with  goals , anecdotes, injuries and an extensive showcase of cups obtained. As many say it was a film life, a film that goes through moments of drama and horror but which at the same time has formidable stages and achievements worthy of being awarded an Oscar. Many ambiguous situations occurred in his life, such as that night while celebrating a goal next  to Villareal 's grandstand, a retaining wall collapsed on his leg that left him double fracture of tibia and fibula. Or those three wrong penalties in the same birth before  Colombia  that gave him a  Guiness record  . To himself, I can't help but mention the rainy night at the Monumental that appeared on the second stick and qualified us to the World Cup in  South Africa  2010. Titan has an extensive career of achievements and swings that make it look like fiction. This time we focus on the start of his career in Boca until his expedition in  Spain .

With the xeneize t-shirt

Its passage through Boca is divided into two stages, both very good. The first starts in 1997 where he manages to score 8 goals in 17 matches for the Apertura Tournament, one of those goals was in the classic against  River  to achieve the 2-1 victory and thus begin to get into his pocket to  Boca swells  . We can not forget the goal that scores to  Gimnasia  that same tournament celebrating in underpants with an eccentric dance and to finish kissing her ankle boots with the colors of Estudiantes, for something they say “crazy”. In the 1998 Clausura his effectiveness was going to improve, 12 goals in 15 matches scoring River again in his second Superclassic and already with the fans in his pocket. At the end of that season Boca ends sixth and DT  Hector Veira  leaves the post and begins the golden story of  Carlos Bianchi.

Carlos's team had an unstoppable scorer, a dealer of the game like  Riquelme  and a  Guillermo Barros Schelotto  who overflowed any scoreboard. A great performance made way to win the 1998 Apertura Tournament, with a crazy unleashed who turned 20 goals in 19 matches, made seven doubles and three of them in a row. The same luck ran the following year in Clausura 1999 when  Boca  was crowned champion, 12 goals in 16 matches for Martin. Unstoppable. In the 1999 Apertura Tournament he managed to score 14 goals, which one was very remembered for having injured the cruciate ligaments, continue playing and thus place his goal number 100 first division. One more epic of his extensive film. In mid-May 2000 Boca faced River in the Quarter-Finals of the  Copa Libertadores , went to the bank after being injured for 6 months. Finishing the second half Bianchi moved his chips and the executioner of the classic entered and ambushed it, with that goal sealed the unconditional love of the fans of Boca. This mood, catapulted the xeneize team to become champion against Palmeiras after 22 years. We arrived at the most important event as a footballer in his entire career, La  Copa Intercontinental . Faced with nothing more and nothing less than one of the best teams in history,  Real Madrid , turned two goals that gave him the long-awaited cup and a piece of the heart of the fans. For Palermo the “viceroy” was not only a football father for having the same position on the playing field and teaching him some secrets of the trade, but also for comforting and helping to regain the confidence of the player after having failed in 1999 those 3 penalties in the  Copa Amé rich .