Lucas Santamaría wrote his name today for the third time in the champions gallery of the Quiksilver Open La Paloma. 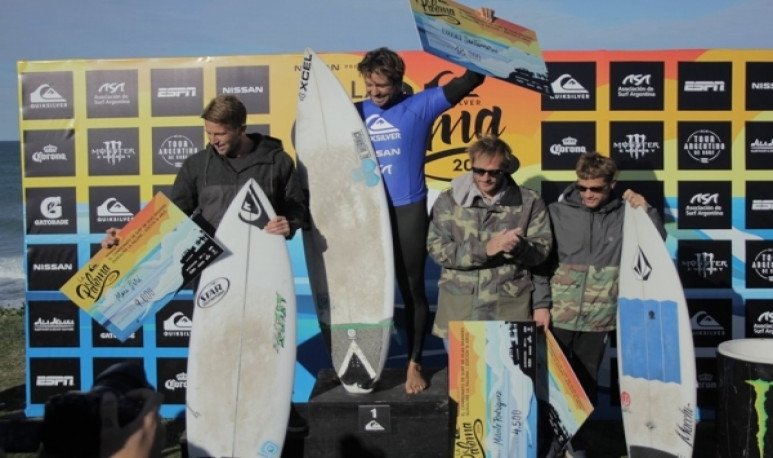 Lucas Santamaría  today wrote his name for the third time in the gallery of champions of the Quiksilver Open  La Paloma, after rounded off against Maxi Siri  a great performance that had him as the main protagonist in the resolution of the Argentine champion title of the Association of    Surf Argentina . While Santamaría did not fight for the crown, it was the one who eliminated Martín Passeri in the quarterfinals and left him doing numbers and waiting for what happened with  Marcelo Rodríguez , the other competitor with a chance to win the title, who also knew how to eliminate.

The morning began with the last 4 heats of the third round, where  Martín Passeri, Marcelo Rodríguez, Felipe Suárez and Juan Arca  achieved the qualification to the fourth.
The summary of the rooms was as follows:  Maximiliano Siri eliminated Joaquín Juárez. Juan Arca to Mariano Arreyes .  Lucas Santamaría  took Martín Passeri out of competition and Marcelo Rodríguez  did the same before Felipe Suárez.

The first semifinal crossing featured  Max Siri and Juan Manuel Arca , in the complex conditions presented by  La Paloma ,  Siri 's experience weighed more in the selection of the waves. It should be noted that they did not live up to the reputation of this beach, but with good shape and better route.

Lucas Santamaría  bittered Martín Passeri  the morning in the quarterfinals. With a score of 7.25 — 5.00 he took him out of competition and fueled the hopes of  Marcelo Rodríguez , who did everything necessary to get  Felipe Suárez , competitor with mathematical chances until he ran into the Patagonian Express.
In the second semifinal  Lucas Santamaría and Marcelo Rodríguez  did not give away anything. Absolutely nothing. He started leading the heat Santamaría, with good fontside attacks he was basing the foundations of a victory he knew how to defend from the attacks of the Chubutense.

The running of the clock brought  Rodríguez  to a good right that he knew how to take advantage of with powerful cuts and quick movements. On Thursdays they did not hesitate to reward him with 3.85, score more than enough to beat his rival and get into the final. Lacking 30 seconds for the regressive final, Lucas Santamaría rowed with strength and determination a left in the lower part and knew how to take advantage of it with two well vertical off the top to pull all the pressure on the panel of judges. After a few minutes, the speaker passed the note: 5.00 points.  Santamaría  to the final and Martín Passeri Argentine champion 2019  .
The celebration of  Martín Passeri  with his own did not wait, the member of the  Quiksilver  team, twenty-two years after his first title won the sixth crown of Argentine champion.

“It's indescribable, it was not a target and it was a target. My task as a coach was more present than that of a competitor, but I never stopped training or dreaming of winning one more title. It's a mime considering the level of Argentine surf... And here we are, 22 years after my first title today I got my sixth  Argentine champion title. Nothing starts or ends here, but I feel very happy and happy to share this title with people who love me and banking me,” said a happy and serene Martín Passeri after being a champion.

Lucas Santamaría  took his third triumph in the history of the Quiksilver Open La Paloma  and confirmed his excellent level of surfing and those conditions that always place him among the candidates for the title. “I am very happy with this victory, it was a great event. While the waves weren't like all of us would have wanted, I take a great memory from here. I congratulate Martín for his new title of Argentine champion and Marcelo who also fought until the end. Now to celebrate with family and friends,” said the winner during the awards ceremony.

The Quiksilver Open La Paloma was 16 years old and once again contributed to the rich and healthy history of  Argentine surf .
Until next year.