The 13-year-old started skating as a hobby in her spare time and now dreams of climbing to the highest step of a World Cup. 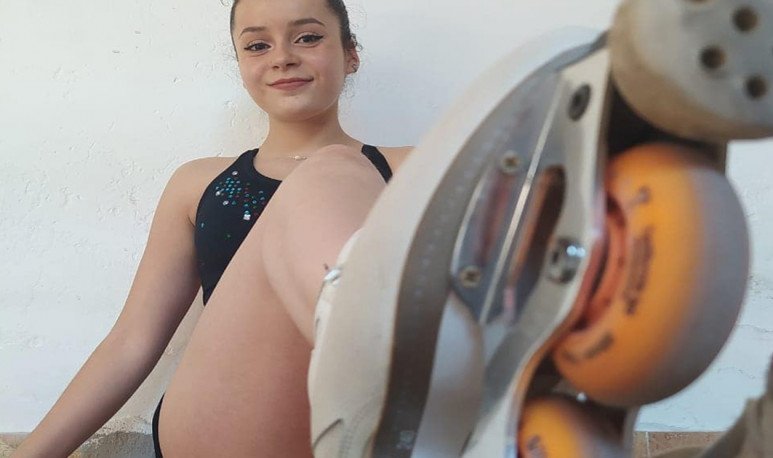 Tucumana skater Sofía Hazeu Vizoso , 13, was selected for the  Pan American  Skate Inline Libre Damas, in the Junior category, which will be held in Guayaquil, Ecuador, between 22 February and 7 March.

Sofia is the first in the province of  Tucumán to qualify to compete in the Pan American skate. He is now in Buenos Aires, preparing with the coaches of the Argentine team to reach the best possible way to the competition. In this sense, it should be noted that those who make up the team that prepares the national squad are: Veronica Lenardón, Mariano Morello, and in the choreography is in charge of Ivana Nouet.

Tucumana has as main objective to get on the podium in a  World Cup , about this he said to the local press that it is not easy at this time, but will try. It should be noted that the skater began in this sport as an entertainment in her spare time, and then fell in love with this activity that, with the passage of time, her challenges are permanently renewed.

Likewise, he constantly works in two indispensable conditions that add to his natural talent, with the goal of achieving goals, which are effort and sacrifice. Both combine perfectly as this combo allowed him to excel quickly in the region. The young Tucumana trains three hours a day during the week, and her close members indicated that the results are in sight.

In this line, it should be noted that, in addition, tucumana practices boxing and  ballet , both activities that without good have nothing in common, these serve them to improve their movement on the skate track. In this regard, he told the Tucumana press that boxing and ballet help him a lot to perfect his routines.

In Tucumán, local media reported that  Sofia Hazeu Vizoso  needs financial aid to cover the expenses involved in traveling to Ecuador. In this regard, the young woman told the press that it takes a lot of money to go to the Pan American in Guayaquil since prices are in dollars. Meanwhile, the trip costs 2,000 dollars, and also the costs required by training items should be added, as well as trips to Buenos Aires, where preparation is carried out.

In this regard, in this province they launched a raffle that will be drawn on February 6. Sofia's mother Cocó Vizoso told the local press that the answer was very good, as many contacted to buy it. In turn, it was known that national deputy José Cano got the tickets so Sofia can travel to Buenos Aires, and they also offered help from the secretariat of International Relations.

Those who wish to collaborate with the Tucumana  skater  to cover the expenses of the trip to Ecuador can be contacted through social networks: coco.vizosopinto on Facebook or Instagram @sofihazeu.

It is a sports discipline of sliding, where athletes who practice it compete on a line skate, combining movements with artistic facets. Figure skating also requires outstanding physical preparation and it is essential to achieve the ability to concentrate on the rink.

Finally, after the Pan Americans,  Sofia Hazeu Vizoso  already has plans for the future. The young woman filmed a knockout video with the aim of allowing her to qualify for the South American. It should be noted that this competition provides places for the World Cup. Recall that is the goal of the skater.

In this regard, the tucumana commented that although the pandemic has not yet ended, hopefully the event can be carried out. Perhaps it could be achieved by implementing the measure that the Pan American Confederation wants to implement, this is the armed of a bubble for the protection and prevention of coronavirus infection.