Juan Ignacio Chela was born in Ciudad Evita, Buenos Aires, but shone in the world with his powerful and solid tennis. Besides, he's a great guy and a great comedian. 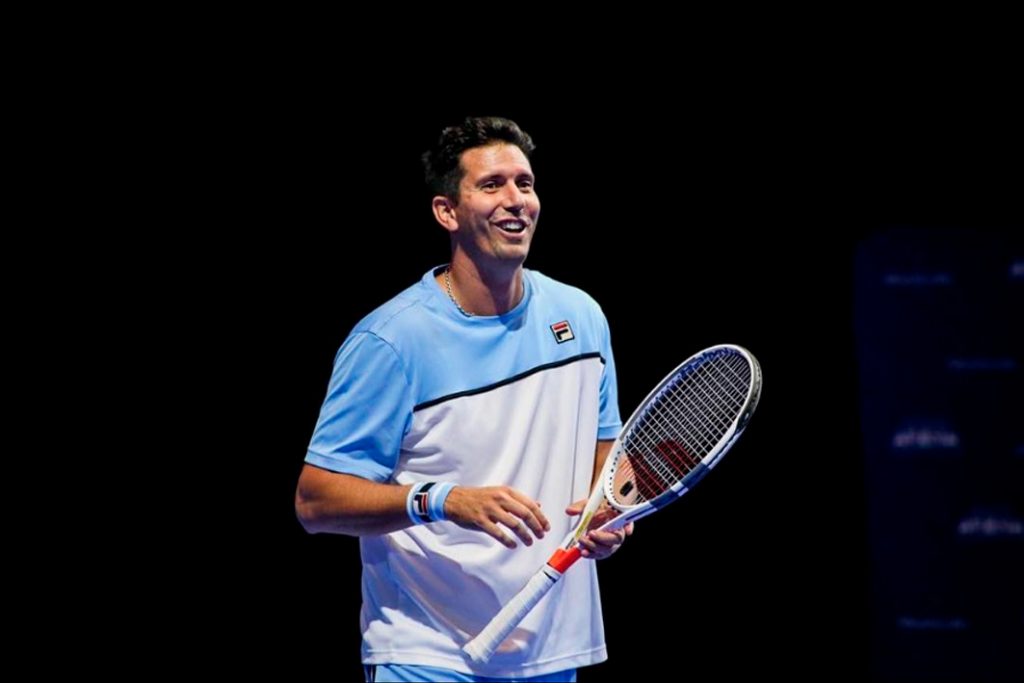 If there's anything that paints Chela full body, it's one of her last anecdotes. He posted on his twitter a photo with Roger Federer, under the heading “20 Grand Slam titles in a single photo.” All 20 belong to Federer... That's “The Skinny”. A barbarian guy. In a tremendous mood. Which, unfortunately, I think he never took himself well seriously. One fact illustrates my position: it is the sixth Argentine with the most wins in the ATP. Chela was talented. I hit him very hard. but very strong. He had a good height, which boosted his serve. Maybe, I don't. Yeah, that all played him against. I remember myself begging him, via TV, that would move his legs. It's just that “Skinny” was a little bit Pachorra. Typical talented man who doesn't need to strive to succeed.

See if he was talented, he started winning important Junior titles. He was 15 seasons among the 30 best in the world. By 19 he had already won two futures. In 2000 he left the qualy in Mexico, to be crowned champion of the tournament. He had won him, no more or no less, than the 1st of the world: Guga Kuerten.

His year was 2004. He had a very even year and reached his best ranking: 15 in the world. He beat the Estoril final to Marat Safin. He put Rolandga's quarters in for the first time. He was on the Davisteam, which he was already on since 2002. He looked like he was really hooked up with tennis.

In 2006 he was an actor for the team that reached the final at Davis. He had a decisive quarter-match against Croatia, which put us in semis. And he was in the final against Russia.

2007 was also a great year in terms of results. He won the final in Acapulco over Moya. He scored fourth in Indian Wells, Miami, Rome and the US Open (second time in a Grand Slam). Where he beat Ljubicic and Wawrinka.

In 2010 he won the Huston final to Querrey and Bucharest to Andújar. In 2011 he reinstated a quarter of Gran Slam, Roland Garros.

It is, without a doubt, an excellent race, in one of the most demanding sports. I think, by game, I was for more. He kind of lacked the urge. Because he had talent left over. I don't know. I'm looking for an explanation that it didn't reach the top ten, being that for me, it had game. There is no point in making hypotheses. The thing is, Chela is one of the best tennis players in our history. What a credit.

Before retiring, he did two memorable things. One, that same year (2012): On the day he retired Roddick posted on Twitter something like “Roddick retired. Let's go! I raised a place in the ranking.” A crack. And two (2004): he put together a TV show with “El Black” Zabaleta. “Pro Tennis.” One would say he liked joda better than tennis. But life shows the opposite: they did it in Chelita's best years. From 2004 to 2010. As it couldn't be otherwise, it was so much fun.

With that same humor (another one on Twitter: “At the US Open they miss me... on court 54") and professionalism today faces the challenge of coacacking “El little” Schwartzman. And he's doing great. Oh, obvious. Diego is improving his game a lot and starting to achieve very important results.

I'd like to take 30 years to the future and see how history remembers it. If as a star of

We have already provided a lot of tips to speak well Cordoba. Now we summarize everything in a step-...

Diving in the depths of Cordoba

You didn't think so... In Córdoba there are several options to learn how to dive and learn about bea...