Home People Sports Paula Pareto: “I think of every competition as if it were the last”

Paula Pareto, Olympic medalist in judo sport, tells us what is her daily life and the complexity of entering a sport performed mostly by men. 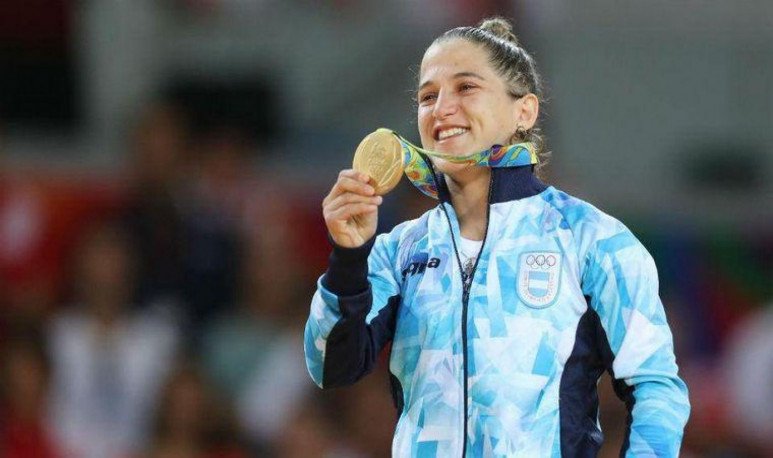 Paula Belén Pareto  was born in San Fernando on January 16, 1986. On his back he carries many South American achievements and also some with more weight, such as the World Championship and two medals, one bronze at the 2008 Beijing  Olympic Games  and a golden one at the Olympic Games in Rio de Janeiro in 2016. The latter is the most valuable, according to our interview.

The little one tells everything about judo, a sport that shows physical and mental development through practice and is of Japanese origin, although every time Paula's turn to play a medal, we feel a sport very close. In addition to being a judoka, she is a  medical  traumatologist at the Hospital de San Isidro, a multifaceted woman who fights on the tatami and then diagnoses muscle aches and fractures or dislocations. Without a doubt, we are facing a warrior, who achieved after achievement was winning a place in a mostly male-dominated sport, but her motto is perseverance and work. This is how he tells us a little about the keys to his life, that he never feels fulfilled, not winning medals, or important achievements, and that's why he never stopped his passion for health. With you, the gigantic little Paula Pareto.

With your important achievements, do you feel that you broke the stereotype of judoka?

I don't think he has made any breakdown, the stereotype goes beyond the achievements won, although I think you can compete at a high level being Argentine and achieve good results without having to go to train outside.

Are you a medical traumatologist, is there anything about everything studied that you take and apply to judo or vice versa?

There are many things that I apply in sports as in health, from judo to the medical side there is a lot that has to do with the cultural, with values such as honor and respect. Conversely, from the medical part to judo, I apply all the injuries that one perhaps drags into life and then adapts them.

How do you think Argentina was handled with COVID-19 on the health side?

With respect to  COVID-19 , Argentina was handled inside everything well, it is a very difficult disease to control that in the day to day we were learning. Testing and mistaken many things that at first seemed to be fine and then had to be improved, but I think there were a lot of responsible people and another not so much. Although the handling was good and depended heavily on the care of each other beyond the preventive measures of politics or the state.

Can you live on judo today in Argentina? Do you think judo is constantly growing?

Today you can not live judo, as it is an amateur sport, although we have scholarships from the Secretary of Sports and ENARD that are very good. But they do not allow you to live the present since scholarships are in pursuit of a sports achievement, it is difficult to be calm about that issue. I am well and live alone thanks to scholarships and contributions from sponsors that help in pursuit of sporting achievement, it is still an amateur sport and one cannot live alone from that.

Are you still thinking about the retreat after Tokyo 2021? What was the happiest moment of your sports career?

I don't think about the retirement, I think of each competition as if it were the last, which is likely to arrive at the  Tokyo 2021 Olympic Games. First I said I was retiring in Beijing, in London, then in Rio, and I'm still here. As old if I might give me, the idea is to do the best in the Tokyo competition and then see as follows.

Without a doubt the happiest moment of my career was at the Rio 2016 Olympic Games for the medal and for being surrounded by all my great team, from the technical staff, doctor, psychologist, kinesiologist to all my family and friends, which is what really makes one arrive in the best conditions. They were the ones who made it possible for the madness of the Olympic medal dream to have arrived. Not in a dream would have been better and that's why it's never going to compare, that's the difference with other competitions.

Surely you have received many negatives being a woman and doing this sport What was your motivation to continue? Was there anyone who helped you? Did your parents support you from the beginning?

My parents always supported me, although many asked why I decided to play a man's sport but I think that sport is not for men or women, it's just sport. My parents always had the same theory, so it was very important to have the support of them and prove that sport goes beyond sex.

How are you preparing for a sporting event? Are you using cabal? Are you doing a mental preparation? Are you studying your rivals?

Before every competition for me the most important thing is to be fine from a physical and mental point of view, knowing my strengths and working them with my sports psychologist, always focusing on the positive part of oneself. The work of studying the rival is done by my coach and then tells me how the rival acts, although it will always be more important to concentrate on what everyone does well and not so much the rival.

Did the quarantine affect you somethin'? Are you alone or accompanied?

The quarantine afflicted us all, some more and others less, but I learned several things and I took a very positive year in a lot of personal growth, which perhaps again without the quarantine would not have succeeded. I took out several positive things for more than it was a bad year worldwide because of deaths, but you can always get good things out. I currently live alone but I always have family and friends with me, and that was one of the things that cost me in this pandemic, although we were always close with the team working on the judo bubble.

What is the hardest and easiest thing to be judoka?

The hardest thing about being judoka is that it is a contact sport and the blows are always on the skin and you have to go out and keep fighting. Maybe if it was a team sport if you're not 100%, a partner can supply you, but in judo there is not that. I always say that it looks individual, but it is as a team since, when it comes to fighting, the body is one's, and when there is an injury, it weighs a little. The easiest thing is to feel accompanied even when it comes to competing alone.

Who is your favorite male and female athlete? How do you see Argentine athletes in the face of the Tokyo 2021 Olympic Games?

My favorite male athlete is  Manu Ginóbili  and female  Gabriela Sabatini  . Argentine athletes are preparing differently for these Olympic Games in Tokyo 2021, I think we are going to be very well because there was a progressive growth that was little by little in the different games and different years, we have greatly improved performance and I think that growth will continue to be so.