Learn how Gabriel Batistuta came to become the Batigol, loved by Argentines and Italians. 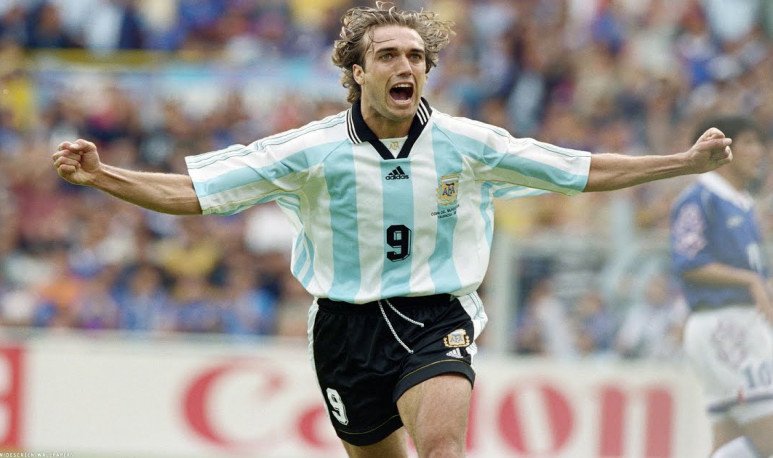 For those who grew up  in the 1990s, few memories are as pleasant  as Batigol's goals. Batistuta was synonymous with festejo in a very special time of Argentine football. That World Cup of 94 and the tragedy of Diego. That other one from 98 and Ortega 's warmth. Batigol was the idol of the Argentines and the absolute star of Fiorentina, loved by Italians.

Since then, as a Santafesino, I grew some pride in me that this type is from Reconquista, somewhere unknown to me, but from my province at last. That was where Batigol was born on February 1, 1969. The son of Omar and Gloria, his first professional club was Newell's Old Boys (1988-1989). They say that, before relapse to one of Rosario's greats, Bati had gone to try the main clubs in the provincial capital, Columbus and Union . Of course, Santa Fe Capital is much closer to Reconquista than the southern giant. It seems that those in charge of selecting future footballers did not see conditions for Gabrielito. He didn't pass the tests.   Some visionaries, those teachers. They missed the chance to train one of the greatest stars in the history of our main sport.

He left Newell's to sign for River Plate although, mid-season, he moved to Boca. He played there until 1991, when he won the Copa América with the national team, received the Balón de Oro as the best player in America and signed for Fiorentina. In Italy the nickname “Batigol” was born  for his extraordinary scoring ability .

In 1993 he won the Copa América again with Argentina. In 1998 he beat the Maradona mark as the  top scorer of all time in the national team . He had that honor until 2016, surpassed by a certain Messi.

“ I asked a doctor to cut my legs”

That heartbreaking confession made Batigol once. It's just that he went through a bad streak due to the unbearable pain he suffered in his ankles, the result of continuous injuries during his 17 years of career. One of those amazing races. In Reconquista they say that,  as a kid, I wanted to be a basketball player.  .

His father's commitment to work clearly marked his future: cars. Gabriel would be a mechanic and would have his own workshop. He had knowledge because he had graduated from a technical school, he knew about electromechanics and, in addition, he was very good at mathematics . While plotting their future of motors and graves, an Argentine youth team came to Reconquista in search of an opponent. The match they had arranged in another city had been suspended and they had to train wherever they went. Reconquista improvised the eleven team with everything they had about their football and won 2 to 1. The goals were made by a 17-year-old kid somewhat exceeded weight, but with a buffalo kick. Already in Rosario, he had as a teacher the great  Marcelo Bielsa, who called Batigol “El gordo” . It is that in their payments there was no talk of fat versus muscle mass, lactic acid and regenerative. Newell's pension says he was given five ravioli. The others, if they were hungry, asked for another dish. Batigol couldn't.

The fat man was hungry, he was far from his house and  did not even rest well: the pension was under one of the grandstands of Newell's court . Every while, in a stake, the swollen visitor broke the glass. When he thinned the first three kilos, Bielsa received him with a prize in training. “Now you can eat them,” he said, while sticking a slap on a box of alfajores that he had brought him as a gift.