We tell you the story of this little Giant who, besides excels in football, stands out in academic life. Scorer and standard-bearer. 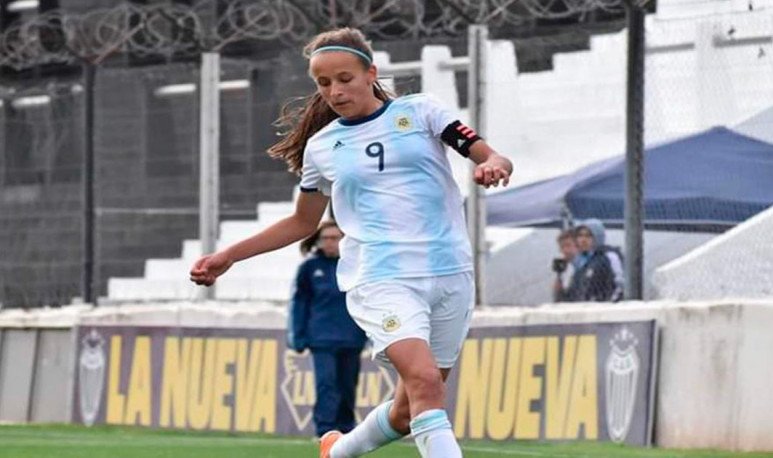 Paulina Gramaglia  is 17 years old and is the star  not only of her club but also of her school.  The player  is  blue albipride . There are many titles he received throughout his career. Among them are the  captain of the U17 National Team,  standard-bearer of  Manuel Belgrano  and  scorer of  Workshops .

Pauli began to feel his connection to the ball early. He arrived at Talleres at about 12 years old. Ever since he institutionalized his plays, he's been  standing out on the  court . That's why he often plays in higher divisions thanhis own .  His career as a footballer  promises a lot  and his plays are in everyone's eye and mouth. This skilled sportsman knows that her passion will take her very far. With effort and dedication he trains every day. However, this does not mean that he is leaving aside his studies. With a family that supports her in her projects and emphasizes the importance of her education, Pauli is living her adolescence. For her academic performance, she was selected as a   standard-bearer  for the secondary level of the Manuel Belgrano School of Commerce (UNC).

The  Manuel Belgrano School  is one of the most outstanding in the province, as it  belongs to the  National University of Córdoba.So getting to stand out is really an achievement .   The intellectual level managed by the student reaches very high levels and the institution's demand, too. It was created in 1938 to offer secondary and undergraduate training.  At the secondary level  , the degree is a Bachelor's Degree in Mercantile. In the Oriented training cycle, students can continue their studies in the field of Natural Sciences, Humanities and Social Sciences or Economics and Management of Organizations. The degrees are of  Basic Technician  in Environmental Problems, Human Relations and Communication or Organizational Management.

On the other hand, at the tertiary level the institution  offers five technical courses. Analyst of Computer Systems, Human Resources, Cooperative Administration, Marketing and Financial Management .  As a subsidiary body of the University, it has an  extension area  that carries out different projects with  social impact.As well as training activities for teachers, non-teachers and the community at large .  “ El Belgrano”,  as we call it in Córdoba, today has, ironically,  a flagship of Talleres.

This institution, despite being forced to  suspend classroom classes,  continued to call its teachers to dictate content in virtual mode, like many other schools in the middle of the quarantine. In this atypical context, the news was particular. There was no act, but  Pauli still managed to stand out . He did not physically carry the Argentine flag, but received a  virtual tribute . With the flag flag, she received praise from  great football personalities . And obviously  congratulations from your club.

The strawberry of the dessert was the greeting of a  great personality of Argentine football . The president of the AFA himself  congratulated the captain  and flag bearer Albiazul:

The message was via Twitter and had its repercussions.   Chiqui Tapia   congratulated the Cordoba for her overall performance. Recognition of these facts is a central point for the growth of our society. It encourages young people whose football careers are  promising  not to drop out of school. Because  school dropout due to club proposals  is a reality for players. While  women's football still has to grow in terms of proposals and budget,  the effort involved in training and dedicating themselves fully to this profession is real. And many times it leads to dropping out of school. That is why Paulina's case is  admirable and remarkable.

Xime Pompiani, the goalkeeper who writes poems to football