Major word in the history of Argentine football with a clear game idea in a dark political era, which allowed Argentina to be World Champion. 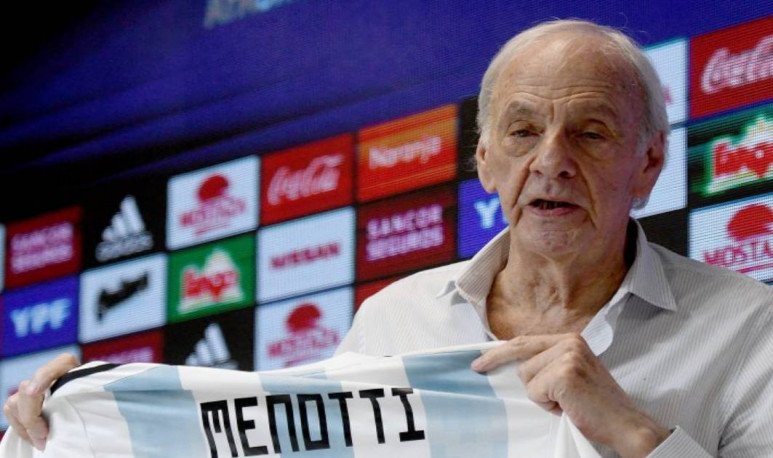 On a day like today Cesar Luis Menotti was born in  Rosario  , the only son, from an upper middle class family and stopped since a child on the sidewalk of  Rosario Central  . Removing the past, in his childhood, walking the dirt streets of the neighborhood and with his 8 years he went in a suit, tie and well-groomed to the court to see his beloved “academy rosarina”, every weekend. Football began to be of great importance although he practiced many sports in his club, such as  basketball, volleyball, swimming or boxing . The importance of neighborhood clubs at that time was not only about sports activities but also social education, constantly attending family dances or weekend parties and thus gradually formed their values. The atmosphere in which he grew up helped shape a historical person for  Argentine football , percusating and constantly hitting the metal of the experience that managed to melt it and harden it to finally materialize the first world cup for Argentina.

Football began to be the economic head of club culture and after the death of  his father César Luis Menotti began to play in the league of a village in Rosario to earn money. He tells in an interview that he was ashamed that his friend working on the railway, with so many hours of work, earns less than him in a very little-known league.  The   Ball had definitely hit the jump from the desk to the world of big business  . In 1960 he debuted in Rosario Central against  Boca  as a forward center, showing good performances he signed in 1964 for  Racing  , where he played a season and moved his football to La Boca. In their first year wearing the xeneize jersey they get their first title as a player. After a brief step in football in the  United States , he heads to play  Santos de Brasil with the great  Pele , the best player in the world at that time. The roulette de la vida was to find them again in 1973 in Argentina, precisely in the  Palacio Ducó . Already Menotti sitting on the bench and as Coach, Santos defeated  Huracán  4-0.That was going to be the last match of “o rei” on albiceleste soil.

After a fleeting step leading  Newells , in 1971 he began his story as one of the most influential coaches of our football, starting his journey in Huracán. There he shows his philosophy of playing possession, constant attack and good treatment of the ball forming a dynamic and direct style. The result? Champion after two years directing, lifting in 1973 the Metropolitan Tournament with the Parque Patricios balloon. A year later the Argentine national team received a hard result in the World Cup held in Germany, after leaving in the second phase and leaving a bad image, began to look for DT by AFA president at that time, David Bracuto, who had previously been president of Huracán and also cut off a long period of intervention by the military in the AFA.The chosen one was Cesar Menotti.

The difficult years and the World Cup

On March 24, 1976,  a new coup d'état  took place in Argentina, leaving a very high toll of deaths and disappearances, forming one of the bloodiest periods in national history. Menotti, with a totally different political idea, returns from a friendly in  Poland  with the National Team and resigns, but as the  AFA  is not intervened, they convince him to continue in the position until the 1978 World Cup. The whole country knew what was going on. Persecutions, disappeared and authoritarianism on the part of the government in turn became common. We were a country with the falling bandages watching everything but with the bandages on our arms, totally motionless. The energy of the village took value in the World Cup that was held at home. In that historical framework that the government believed favorable ended up being a problem. The Argentine team, with Menotti's hand and showing football as a mark of his notebook, managed to consecrate himself champion beating  Holland  by 3 to 1 in the Final. The world and Dutch figure,  Johan Cruyff , did not participate in this event because of the violation of human rights in the host country. The main problem for the government was that 10 million people gathered to celebrate the title when social gatherings were banned. Football went through the inconveniences, aroused the passions, something that only this sport generates.

The year after palpating the success and with a tight fist, he decided to lead the Argentine team in the Youth World Cup. Inside the squad there was a little ruliento who knew something about the ball. The young  Maradona  was led by the master and began to show his football greatness by turning 6 goals in the contest.  Ramon Diaz  was the goalscorer with 8 goals. Argentina was Champion. The skinny ended his link with the national team after losing in the second phase in the 1982 World Cup held in Spain. He left a giant footprint.

Barcelona  wanted to continue the file of the ball to the ground and the combination of passes, so he signed the Argentine coach in 1983. There he won  Copa   del Rey, Copa de la Liga and Super Cup  and lost only 16 matches. He also led important teams such as  Atlético de Madrid, Boca and Independiente,  among others.

Playing with hair, directing Maradona, directing Barcelona and winning world champion is even a difficult dream to dream. However, there is a skinny high who fulfilled several dreams of his own and others, made an Argentine people happy to see his selected come out as world champion.