The Salteño climbed to the highest podium in the motorcycle category in the most demanding competition on the planet. 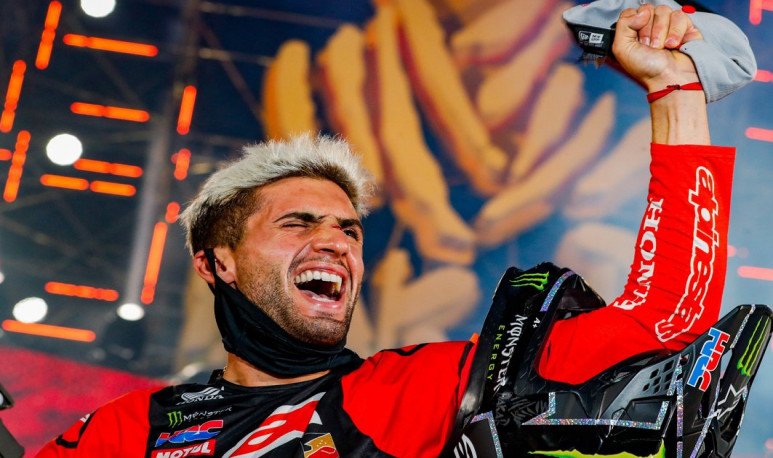 The Saltano  Kevin Benavides , became the first  South American  in history by consecrating himself winner of the  Dakar Rally 2021 in the motorcycle category and, in turn, became the the first national pilot to win the title of one of the two main divisional of the most demanding competition in the world.

Recall that Benavides debuted at the Dakar Rally in 2016 and scored the territory of the competition obtaining fourth place in the overall table, in 2018 came second, in 2019; fifth and last year 19th in the landing of the test in Saudi Arabia, due to a breakage of engine in matchday 6 and penalty for changing it, and it is there that the American Ricky Brabec was the one who raised his arms on the final  podium  .

But the salteño did not lower his arms and his fifth participation consecrated him the winner. The 32-year-old  Argentine and Latin American enduro champion  aboard his Honda vehicle celebrated after the completion of the 12th stage that took place between the towns of Yanbu and Yedah, in Saudi Arabia.

Regarding the toughest race in the world, Benavides expressed a year ago that he won stages, was three times on the podium and qualified his work as very good and, in turn indicated that the Saudi desert liked it very much since it is very diverse, beautiful and very large, which allows to make a good. Dakar project in the future. And the future came soon for the Salteño who turned 32 on January 9. It should be added that his 25-year-old brother Luciano also had an outstanding performance.

Let us also remember that Luciano's debut gave him talk to the official team Husqvarna. On the other hand, positioned at the Top-10 he had to retire due to a fall, which caused him an injury to his right shoulder and had to be transferred by helicopter to the Tabuk hospital. That day, Benavides had won the ninth stage but was not satisfied, added to the withdrawal of his brother and also the memory of having celebrated one year after the death of Portuguese rider Paulo Gonçalves was undoubtedly not a pleasant moment he remembers, since he argued that at that time he wanted attack and stay focused to dedicate victory to your friend.

The beginnings of Kevin Benavides

Kevin was born in  Salta  and began to compete at the age of 9, quickly the salteño became a regional reference in enduro, the discipline that positions motorcycling in a rally to the field open, a competition that is considered one of the most extreme. Then, in 2009 he hit the international jump and continued to grow, consecrating three Latin American enduro champion in the categories: Junior, E2 and Scratch, in 2014 Latin American Enduro Champion E3, and in 2015 first in the Dakar Series Desafío Guaraní.

After a year he came his baptism in the edition of the race that took place between Argentina and Bolivia. In 2017, Benavides hopeful when he already counted among the candidates for the final win, suffered a fracture in one hand 15 days after departure.

Prior to the Dakar Rally 2021 competition, Salteño felt convinced that he would win the race, in this sense he had expressed that he was very well physically, he was willing to fulfill his great dream of winning in the Dakar. Remember that his optimism also had to do with the triumph he achieved at Rally Andalucía in October.

And so it was, on Friday 15 January, Benavides took the podium and made history by consecrating himself as winner of the Dakar Rally 2021 in the motorcycle category, becoming the Argentine and Latin American enduro champion, the most demanding race on the planet. Undoubtedly, its title is proud of all Argentines.

Favorite Argentinian in the Dakar