Angel Lo Valvo, the first racer to win an official motorsport competition, is also the one who inaugurated the Arrecifes iron tradition. 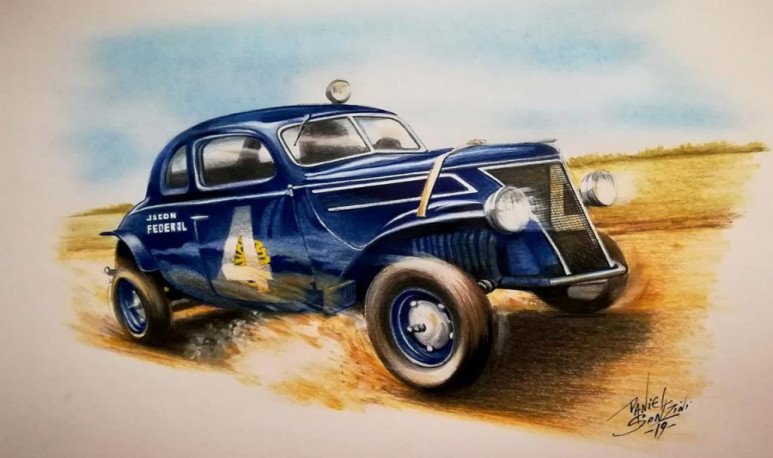 When on November 9,  1909 , the new baby of the Lo Valvo family arrived in the world,  Reefs  didn't know they were receiving the  “Father of Myth.”  Exactly thirty years later, Ángel, who was already a talented young man, was going to consecrate himself as the  first Champion  of Road Tourism in Argentine history. And that title would make his neighbors get excited about the fierros: from the streets of Arrecifes ( nowadays the city is known as “The Cradle of Champions” ) would leave, among others, José Froilán González, the Di Palma, Carlos Marincovich, Néstor García Veiga, Norberto Fontana and Agustín Canapino.

In addition to that record, the great Angel Lo Valvo (who ran his first races with the pseudonym  Hipomenes, the Greek god of racing ), two years earlier, in 1937, was  the first runner to win an official competition : the first race of the Argentine Championship of Speed (organized by Automóvil Club Argentino).

The origin of the pseudonym is, on the one hand, funny, and on the other, not so much. Before he transformed into the sports myth he is today, it seems that Don Lo Valvo really liked gambling. Like most timba lovers,  there were more times I lost than the ones I won . Conclusion: many creditors to escape from. When, moving heaven and earth, he got the money to run, he didn't want to sign up with his real name so they wouldn't come to charge him. Over time it became known who was behind the pseudonym, who would continue to use for a while longer.

We're in 1937. The Automóvil Club Argentino organizes,  for the first time,  a speed event. The call is wide: anyone who wants to participate is welcome . Lo Valvo scores with a Ford V8 . Win. He immediately realizes that he has just left in the history of motorsport in our country as it is the fastest in the first touring competition in Argentine history.

In 1938 he runs the “Grand Prix del Sur Argentino”. He has mechanical problems and is forced to abandon. The people who knew him say he's desmotivated a little,  you could almost talk about depression . Until 1939 something else will happen that will change his life once again:  the Argentine Speed Championship is transformed into  Road Tourism  . This time, the call is not open: the organizers are those who define who compete, who choose, among others,  Juan Manuel Fangio , Oscar Gálvez and Eusebio Marcilla.

They're also going to look for Lo Valvo, who immediately accepts and receives the stroke of enthusiasm he needed to get out of depression. He sets up the Ford V8 and decides to get the nickname: Hipomenes is part of the past, now it's going to run with its own name.  He is the first in the history of  Road Tourism  . At the same time, and this is the bittersweet part, it will be the last title you get in your life.

Lo Valvo and his participation in the history of Argentine motorsport

There's another anecdote that paints it full body. Lo Valvo was aware of the importance of staying in history and wanted to do it at all costs. Therefore, in 1946, when the races for World War II were interrupted, he did not want to sit idly by and he invented a challenge: together with Ángel Pascuali they set  the record of 100 uninterrupted hours of driving a car . They prepared (minimally) an MG and alternating (when one drove the other slept), they traveled 8511 km at an average of 85,119 km/h. It took four days and four hours.  They fought against sleep, against the inclement weather and against the clock . But they did it.

In 1953, after years of seeking to repeat the achievement of 39, he retired from professional motorsport. Finally, in 1978, he died in his beloved city. In addition to her legacy and having inaugurated the very long list of Arrecifes pilots, she leaves another heritage: her niece, María Cayetana Lo Valvo,  would marry a certain Luis Rubén Di Palma . Sounds to you, doesn't it? What is said, a family of iron men in a town of iron men. Wherever you are, happy birthday, don Angel!