The Paranaense footballer told the unforgettable experiences he shared with Maradona as his opponent and, also, fan. 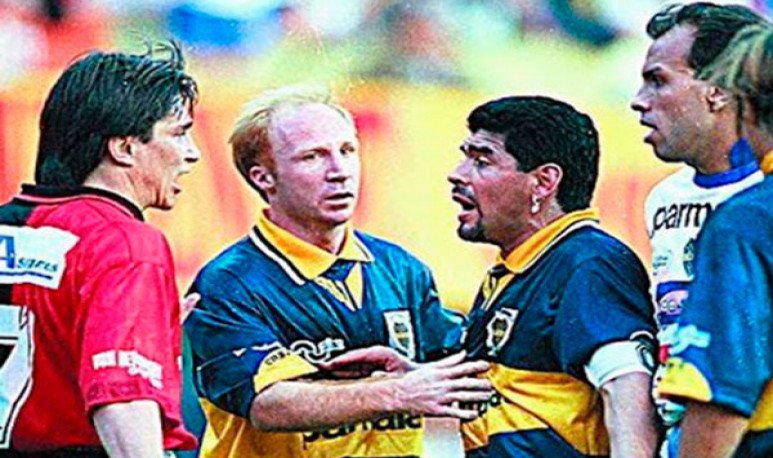 Maradona 's death paralyzed not only the country, but the whole world.  For the entrerriano striker the news fell like a baldazo of cold water . I thought it immortal, like many people, and that he was going to get out of this as usual. However, that did not happen and Argentina mourned for an indeterminate time.  The athlete found out through his father, who had to inform him what had happened . When they told him he couldn't believe it, he thought it was a social media lie. The reality was hard to face and that day lamented like another fan.

Victor first met  Diego when he returned to the court after 14 years of inactivity.  He was playing with Columbus and Pelusa had returned to Boca . He told the anecdote by talking to radio Costa Paraná and explaining what the star meant in his life. In this regard, he defined the experience as the  most important thing that happened to him throughout his career . He also reported that, although he was within the field as a professional, he lived him as a privileged spectator. While his companions were dying him because he wasn't getting into the heat to see the star.

Put on the shirt

The famous confrontation between Columbus and Boca took place on  October 7, 1995  in La Bombonera.  After the match,  Diez  gave Victor the shirt with which he played during the date . But before the beginning, they had greeted each other, a picture was taken and the Paranaense asked him for the coat before everything. Also, he revealed that he chased the photographer everywhere by giving him his phone and address to get the special portrait. At the end of the match, the athlete was for the goal of getting what he promised. However, he was complicated by the number of people, fans and journalists surrounding the star.

But he waited for him to see him up close and greet him again. According to the entrerriano footballer,   Maradona  was a phenomenon as a person . The time they shared, he started to tell jokes and talk to everyone. There, he asked him again for the garment and he replied that he wanted yours too. So Victor gave it to him and the Ten came out with Columbus's shirt in a photo. Finally, he promised him that he would send him to the locker room what he longed for. And he complied.  The prop from Boca located him and gave him the gift from the star . In laughter, the athlete admitted that he didn't even want to bathe so his teammates wouldn't steal it.

In  2008  the players met again when   Maradona  came to Paraná to play showball  . Now, the goal was for Diego to  sign him a shirt for the Argentine National Team . At the same time, Victor and Sergio Goycochea had been teammates in News Old Boys. So he asked the latter with shyness to get him the shirt. But Lusa surprised him by inviting him to sit with them. He even offered him juice, sanguchitos, fruits and even asked him things. Between both meetings went by years of difference and Paranaense achieved something that not many can say.  He was left with two invaluable items for the football world that immortalize precious moments .