The Mendoza Regatas Club, with a lot of effort, acquired a first-class international boat, to enhance its favorite discipline: rowing. 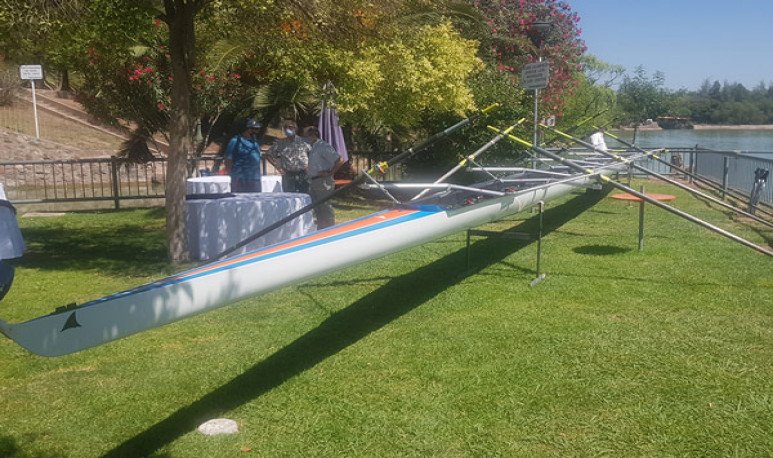 The Mendoza Regatas Club is a historic and traditional institution in the province of Mendoza. Throughout its history,  he has stood out for being a national reference in water sports such as rowing. That is why, in recent days, he got into the consideration of the whole country, and the region, for having acquired a boat of the highest level.

Jorge Aguirre Toum, president of the institution, highlighted the event. “It's a pride for us to present this boat.” On the technical data and the origin of the boat, he said that “is a  Hudson 8 with helmsman, first line worldwide. He's the last champion. He's used to winning   Olympics . It is a new boat, manufactured in Canada by the Hudson company, with the requirements we have here at Regattas. Its cost is 75 thousand dollars.”

The leader remarked that, had he arrived earlier, the role of Regattas in national and international tournaments would have been different.  “ It's a tip boat. Equal as rowers and competitors, it makes a difference. This is not just what we say, but also by the president of the Argentine Rowing Association.   When  Regatas  lost a tournament fair, with this pot, we would have won.”

With the effort of all

While Regatas is a club with  35,000 members , first-class facilities and multiple venues, it is still a non-profit organization, which is hard to fulfill all its commitments. Therefore,  “we got down to work with athletes and leaders, to end this acquisition. This project started 2 years ago. We started with savings, to separate the amount, to make the deals. From parents, athletes and   leaders  we were able to materialize it.”

Coming out of the pandemic

The pandemic has not been overcome, at all. But the decline in the number of daily cases has led the province to recover many activities. Clubs are in those cases.  And the Mendoza Regatas Club managed to stay intact, with all its employees up to date and with facilities ready for the time of its reactivation.  “ We have overcome the pandemic by taking care of our partners. We want to thank the great support of all the people of Regatas. We have maintained the institution in full force.”

The Club is already receiving, again, its members.  Families, friends and lonely people visit the gardens, swimming pools and their inspiring views from the restaurant, which is open to the public, and is located, privileged, in front of the   lake . The summer school is also operational, not only for members but also for anyone who wants to join, without being part of the member staff.

The club is located in the legendary Parque General San Martín and is a reference and tradition for the whole society. In addition, it has several venues in Maipú and El Carrizal, which position it as one of the largest clubs in Mendoza.

Beatriz Bonnet: a symbol of argentinian comedy with sad ending