Two Mendoza made a solidarity crusade and joined the departments of Maipu and San Rafael on skates. 240 kilometers, in 10 hours on rollers. 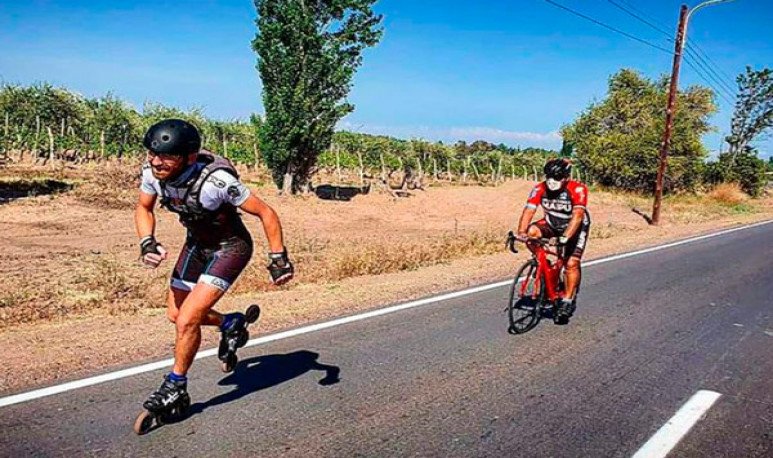 Long distances can be traveled in vehicles such as cars or collectives. Traveling by motorbike is also a nice option. But there are others that require an important physical requirement. Many venture to take long walks or even epic runs or marathons.  But what is, a little, out of the ordinary is to complete hundreds of miles on skates. Therefore, what two Mendoza did, for a solidarity cause, is to stand out.

Eduardo Mulet, 29, and Mauricio Porcel, 35, broke the national record for skating en route. The athletes joined in rollers the 240 kilometers that separate the departments of   Maipú   and San Rafael  . However, the record was not the only one that motivated this journey on skates. For, moreover, men gathered non-perishable food for some canteens in the province.

The gratification of crossing the limit and obtaining a new brand nationwide in rollers cannot be discussed. But it wasn't the only thing that led Mulet and Porcel to do it.  Many people joined the move and food was distributed in three picnic areas in the maipucino department: Rincón de Esperanza de Fray Luis Beltrán, Manitos Unidas de Coquimbito and Niños Felices de Rodeo del Medio.

La Rodada y Travesía Solidaria also collaborated with children with disabilities living in Ciudad, Tunuyán and San Rafael.   Thus, the adventure achieved its sporting and social purposes since it started in the central square of Maipú and ended at the roundabout del Cristo in Sanrafaelinas.

As a welcome and accompaniment, four members of the Bici-Inclusives team joined in the last  kilometers of the Rodada Solidaria, which depends on coordination Integral of the People with Disabilities in the commune.

Along with the skaters was the  Paralympic athlete   Mario Gutiérrez  ,  who won the Guinness record in 2016 after traveling 210.6 kilometers in 24 hours in a wheelchair  . They also joined the cyclists crusade of  Lavalle , of the cycling school Raza Biker and did not miss maipucinos and sanrafaelinos.

Mario Gutierrez  has been an athlete for more than 30 years, is 58 years old  and serves as a marathon. In addition, he has a motor disability due to the sequel of poliomyelitis.  In February this year, the prominent athlete, for the first time crossed the   Andes Mountain Range  by handbike  (handbike), a three-wheeled bicycle that is propelled, directed and brakes with his arms. Mario made the journey with the Cordovan athlete Santiago Gutiérrez, both with different motor disabilities, and traveled a total of 17 kilometers, ascending to about 4,000 meters above sea level.

Riding skates along Mendoza routes, in broad daylight, deep in the summer heat, is not for anyone.  Mulet and Porcel have a high experience in skates, and that helped them overcome the high temperatures of December Mendoza . Assistance was essential for hydration and mechanical assistance, although not too much was required.

The crusade ended with a happy ending. The non-perishable foods that were raised met expectations. Society again showed that there is always time to be a little more generous and remember  those who have the least . In this case, the decoy was the journey on skates. Reason enough to be a little more supportive.