We like to take out some metal, we're re cholulos. We tell you the story of the Cordoba basketball player who was hand in hand with Michael Jordan. 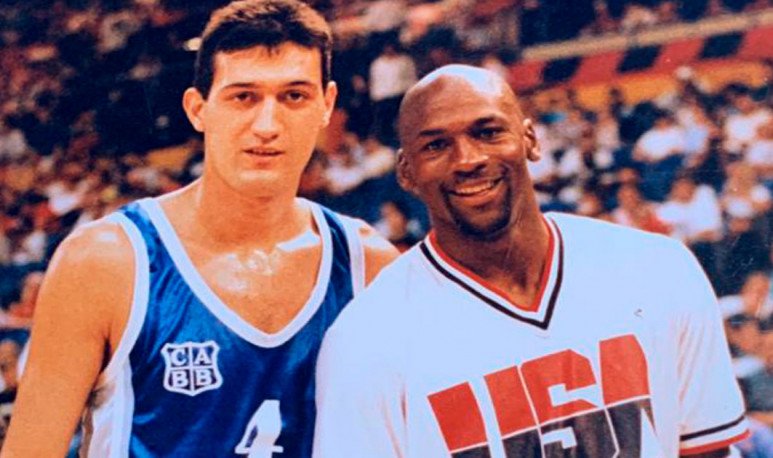 Michael Jordan is the great figure of basketball worldwide. While other players have already passed to the podium of the best, their trajectory remains unattainable. The level of play, tactics and talent combined in their performance are unique. And many define him as the best player of all time.During the 90s he reached the top, and remained there until today .

Michael Jordan currently owns the Charlotte Hornets NBA team. It continues to triumph in the world of basketball and nothing takes it off this sports sphere. Jordan's natural position was that of escort, he also played as eaves base in some matches. In all positions he shone. He even had his time as a baseball player. And his magic, regardless of discipline, was still intact. That's why playing a little game with such a figure is not for anyone.

Luis Emilio Villar was the Cordoba figure who had the opportunity toshare the parquet with such anicon of basketball.The Argentine National Team and the first NBA team met in 1992 . This match was part of the pre-Olympic. The Argentine team managed to beat their rival with a strong difference, and with a Cordovan. “El Mily” Villar was a fundamental piece to achieve this triumph. In addition Hector “Pichi” Campana, Marcelo Milanesio and Diego Osella as key figures of the match. “El Mily”, on that occasion, scored 18 goals, so Michael Jordan himself remembers.

At this time, the Argentine national team was the team that made the most points to the Dream Team, which was feared by everyone, made up of the best talents of the NBA and basketball at the level of football.orical and global.However, this Dream Team, with Michael Jordan as the protagonist, fell into the hands of us, Argentines . And yes, this is what we mean by “take out the badge.”We enlarge our victories and minimize everything that involves defeat, that's how we are . And we're proud.

With 59 matches wearing the blue and white, 341 total points and being champion in the 1995 Pan American Games of Mar del Plata, “El Mily” asked for a photo. Yeah, picture with Michael Jordan, the international basketball legend. Because, as famous and talented as you are, if you're Argentine: you're cholulo. The Cordovan remembers this match as a feat, and tells the media unmissable details. Like, for example, the adrenaline of wanting to go out on the court to kill.To throw everything in the hoop, and leave everything on the parquet . In that round trip, he met “Sir” Charles Barkley, with whom there was a misunderstanding because of the difference in languages. However, everything was arranged on the court, with points coming and going, intentionally, as revenge. Obviously, celebrated by the scoring teams respectively. Well shouted in the opponent's face. Moreover, in the same match, “The Mily” and “The Postman” Karl Malone hit wave.The Cordovan tells that jokes were even made in the middle of the game . And that, at the end of the match, Malonegave him his wristbands.

We're rebutts, aren't we? Hang on to be Argentinean!