Home People Spectacle “Telenoche”, the historic family news that lost leadership because of its own mistakes 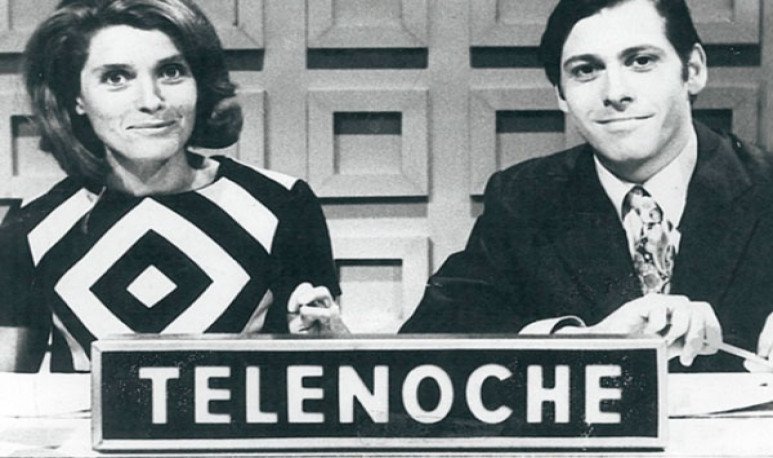 If anyone had been told on the night of January 3, 1966 that that television news program premiered almost on the verge of midnight, would have been kept for more than five and a half decades in the air, he would probably have sketched an accomplice smile questioning such a statement. The legendary newsreel that began in the mid-60s in those times of the   TV   black and white had a very limited technical infrastructure, but the professional level of its presenters matched up those limitations from the technological point in a forceful and effective manner.

55 years after his debut, release in the original schedule of 23, weeks later he ran sharply from that late shift bordering midnight, being located in the central sector of 20 hours, exprofessed reaccommodation to compete with the “Repórter Esso” parked on the sidewalk of the which was then “Teleonce.” Monica Mihanovich and her colleague Andrés Percivale may seem naive to the times ahead, but no one in their right mind would doubt the unwavering professional ability to convey the news of a harsh era, where powerful world rebounds still resounded after the murder of John F. Kennedy hitting the world news centers.

With the structure that Argentine tv had at that time where the coup to Arturo Illía was foreshadowed in the newsrooms of newspapers and magazines, “Telenoche” covered such transcendental news situations as the “Cordobazo”, the Vietnam War, the arrival of man on the moon and other events transcendental. The chemistry between Andrés Percivale and Monica Mihanovich broke just in the 1970s, when it was rumored that both had a captivating sentimental relationship, in a high department on Rivadavia Avenue a few meters from the Congress of the Nation. Leo Gleizer, a journalist from the old school, was chosen to occupy that position and a few months later he would arrive at the station César Mascetti, a large squad where figures such as Roberto Maidana or Sergio Villarruel were consolidated.

Unusually, when everything predicted a consolidation of that great team configured, the surprise was capitalized when Monica Cahen Dánvers (Mihanovich) decided to move to the competition to work on the station now called “Canal 11”. For many seasons, the cycle was consolidated thanks to its informative effectiveness and a concrete presentation of issues without privileging the personality of those who transmitted them. Democracy with the arrival of alfonsinism had eroded several years later, hard times where the figure of the Rioja Carlos Saul Menem grew to access the presidential chair, shortly before the change of the decade. Color television had been surprising every family clan that accessed the device for a decade, but the changes would also reach the broadcasters.

At the heart of Artear the decision was made, it was necessary to return to the format of the host couple and after some lobbies, the truth is that Cahen Dánvers and Mascetti had been chosen to endorse that initial duo that reached such good acceptance in their unforgettable debut at night in the mid '60s. ”   Telenoche 13”   was renamed simply “Telenoche” and the surnames ran off stage to allude at that time to the “news show Mònica and César”. The energy and confidence that both exhaled during those seasons also portrayed without hesitation the growth of a great couple on and off the girl screen. Being good companions, that the sentimental grew steadily in parallel to the work, gave him a familiar image that transcended the professional to settle in another way at the start of the historic “prime time” stretch in 1992.

Cable television disembarked with enormous force and a year later “Todo Noticias” was born, a hotbed for that alternative signal that promoted the performance of figures of care professionalism, among them María Laura Santillán. They had already left that traditional open tv station figures of the caliber of Horacio Galloso, Juan Carlos Pérez Loizzeau, when the renovation came with notable journalists such as Antonio Gil Vidal, Marcelo Bonelli and Edgardo Antoñana. The professional prestige and not the aesthetic or youth of its workers was privileged, times where the news broadcasts mostly linked to the seriousness to communicate, avoiding the egolatrical attacks of drivers, something that in recent years seemed to deteriorate. 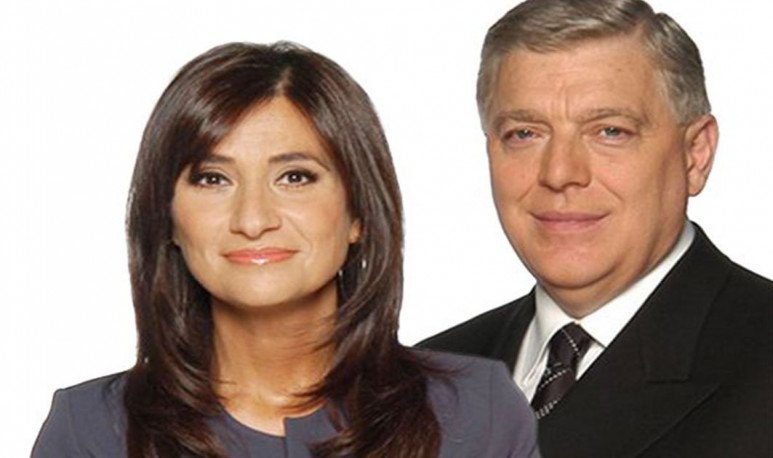 Business decisions played hard in renewing a format that showed some fissures, probably because of the tireless delivery of their drivers. So, in 2003, while Argentina was looking for president after the serious collapse of the Alliance, Mònica and César left the lead of “Telenoche” to a couple who had the mission of maintaining that strong family image. Thus came the times of Maria Laura Santillán and Santo Biasatti, a duet that showed the warm moderate sympathy of the journalist and a serious but kind position of the author of the phrase “another subject”. The consolidation of the news landscape of the Constitución neighborhood's signal grew without breaks, seasons in which “Telenoche” won as “best news” most of the time at the Martín Fierro Awards.

Copying the structure of a couple with family tone as Monica and César had once been, on the sidewalk opposite the lesson had been learned in Telefe effectively, a station that in recent years placed Rodolfo Barilli and Cristina Pérez, a decade where the wear and tear shown by Biasatti and Santillan was inocultable every night. The host of the series “Telenoche Investigga” had already separated from the director of journalistic content Carlos De Elía and that crisis had reached the screen, times of a channel where youth began to be more privileged than the training of its participants. The nuisance by the arrival of panelists dedicated to computer science or other lateral themes, was running the main focus of the structure, times where the departure of certain figures made more noise than expected.

Maria Areces, Catalina Dlugi and other personalities of the station left in unpleasant terms, while the renewal of the station privileged youth rather than the ability to work on screen. The station prioritized a certain digital circus or the absurd antics of a duet of meteorologists who went out to hunt storms or hurricanes, a time where it was already rumored that Telenoche would mutate as drivers again. Worn by pressure running outside cameras, one day Santo Biasatti slammed the door to go quickly to a cable station, while Santillán, fortunately, a cancer response, gave signs of fatigue and little congruence with his companions. 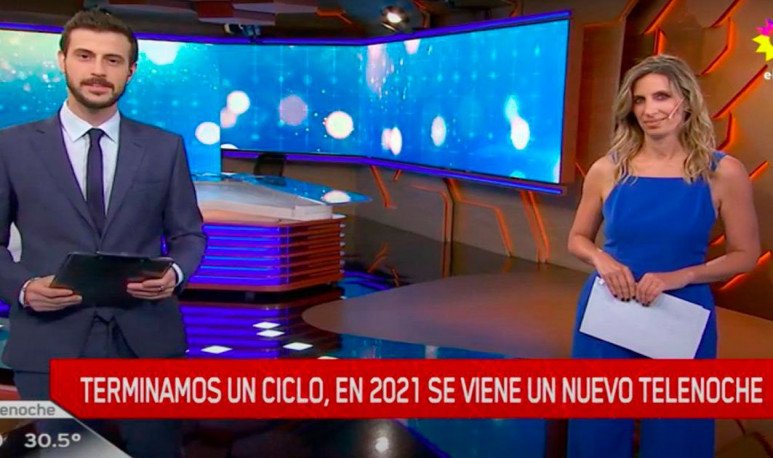 The growth of certain columnists or producers of Jorge Lanata's “Journalism Para Todos” program slowly staffed the broadcaster and, therefore, its central news. Rolando Barbano, Lucianda Geuna and other employees arrived on the screen with more institutional support than scrolls to take the responsibility of going out on the air, unabrible renovation where insult animators like Mario Massaccesi surprisingly rose in business consideration, changes that did not they redeemed better rating numbers. The insufferable ego and histrionism of certain professionals devalued the historic prestige of the news, a time where the rumor of Carlos De Elía's resignation to news management looked like white smoke through all the chimneys of the Constitución neighborhood canal.

The return to power of the political party that had ruled in the period 2003-2015 was the eloquent sign that everything had hit a roof from the operational. The death of Devora Pérez Volpin by medical malpractice in Capital Federal, truncated an internal project of placing her with teammate Marcelo Bonelli in the conduct of “Telenoche” and the acceleration of the decisions was brewing another traumatic moment. Surprisingly, the station placed Luciana Geuna and Diego Leuco as companions of Santillán, times where the fight for the driving of the informational aircraft carrier breathed many errors and an insufferable dynamics. Thus, at the end of 2020, with the serious pandemic and several events affecting the news journey, Maria Laura did not accept the working conditions that the broadcaster offered her, initiating a large labor demand very close to 30 million pesos.

The rumors were already taking the stage and the sign from the Constitución zone had to admit that “Telenoche” already had a new duo: Diego Leuco, son of a prestigious journalist and Luciana Geuna, columnist of   Lanata   , they were the chosen ones. The first, only with the debatable experience of the cable and the second without the scrolls for such a position, generated the rejection of the historic audience that achieved “Telenoche” in other times, aggravation boosted by the location of Dominique Metzger and Federico Wiemeyer conducting the news broadcast during the summer. The audience showed signs of discontent and the rating numbers from February to date, not only turned on the alarms, but also reflected an incomparable reality.

The new duo “LyL”, with the charisma of a telgopor fridger and the sad empathy on screen of a toothpaste crushed by a motor grader, did the rest. The news that in other times achieved guarismos close to 20 points fell to a quarter of that measurement, a cycle that every night loses with its direct competitor by almost three points. Without giving importance to these elements, from some places of the station began a series of questions, taking into account that the channel has been without regaining leadership in the measurements for several years, warning that, if this hard deterioration progresses, it would be irremontable to improve the average of prime time even with the expected return of Marcelo Tinelli in a few weeks. Time will tell how far the changes in the traditional format of “Telenoche” were successful, but many do not rule out that, if the response does not improve, after the elections there will be sudden novelties pursuing the return of an audience that in recent years decided to take away the historical back up to a legendary news program.

Cordovan pirate: a passion, many disciplines

Club Atletico Belgrano: the birth of the Alberdi Giant

A generous country and a recipe that is not magic

Cheer up to the first yoga class with Patrizia!