The film, directed by Luis Moglia Bart, premiered on April 27, 1933 at the Real Cine Theatre in Buenos Aires. 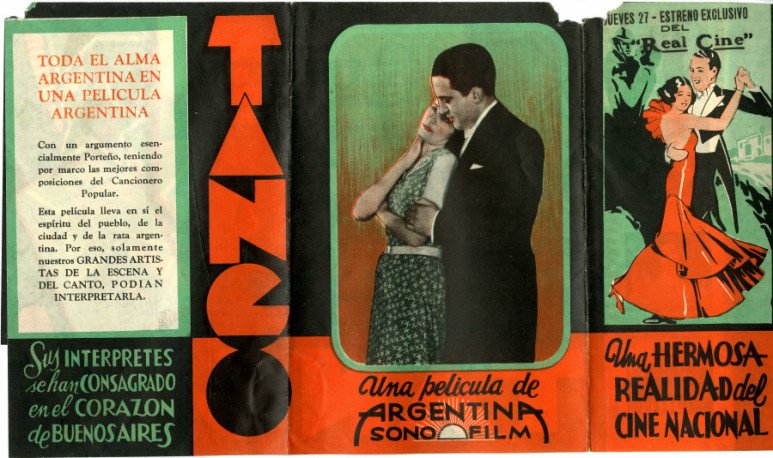 Tango  tells the story of Tita (Tita Merello), a girl from the suburb of Buenos Aires who runs away with Alberto Gómez, the handsome of the neighborhood, leaving Pepe (Pepe Arias), the man who loves her. In the entanglement to recover Tita's love, Luis Sandrini, Libertad Lamarque, Azucena Maizani, Mercedes Simone, among so many stars who were consecrated in Argentine cinema and in the heart of Buenos Aires. It was the first Argentine sound film and this is its story...

The film, directed by Luis Moglia Bart , premiered on April 27, 1933 at the Real Cine Theatre in Buenos Aires. With short dialogues and multiple adventures between song and song, the actors perform memorable tangos alongside the most prestigious orchestras of the time, such as Edgardo Donato, Juan de Dios Filiberto, Osvaldo Fresedo, Pedro Maffia, Ernesto Ponzio, Luis Visca and Juan Carlos Bazán. In this way, music cinema managed to capture with emotion and fidelity its viewers and began to settle in popular cultures. Tango was the first film made by Argentine film producer and distributor Sono Film , a company that would become one of the most important in the country, current today.

By 1933, there were two companies, Argentina Sono Film and Lumiton.  Only for a few daysTangowas the first sound film . Los Tres Berretines , by the production company Lumiton , directed by Enrique Telémaco Susini, and which featured Luis Sandrini, Luisa Veil, Luis Arata and the orchestras of Anibal Troilo and Osvaldo Fresedo, premiered days later, on May 19, 1933. It tells about the three main berretines of the porteños: football, tango and cinema.

Popular sensibility, Buenos Aires costumbrism, conventillo, uprooting, were an emotional mirror for receiving audiences that enabled the development of the national industry; mainly urban workers who came from different provinces of the country and immigrants. Another kick that came from the hand of Tango, was that for their recording they used the novelty of the Movietone System, which allowed them to record the soundtrack on the same medium as the image. The implementation of optical sound was another factor that made the film industry grow. In addition, it allowed the public to know the faces of his favorite radio theater figures in many cases.

Between 1933 and 1945, Argentina became the main center of production and distribution of Spanish-language films. Along with Mexico and Brazil, national cinema was one of the most developed in Latin America. ango (1933), Tres Berretines (1933), Riachuelo (1934), El alma del bandoneón (1935), Los muchachos de ango (1937) are part of the genesis of national cinema. Workers, housewives, immigrants and busavida filled the rooms. By  1940 there were 174 cinemas in Buenos Aires and  the entrance cost 75 cents , a much lower value compared to the theater localities. Small cinemas also operated in the neighborhoods, offering a continuum of two, three, four films at very low cost.

Tango is a jewel that you can watch online to enjoy a story of love, heartbreak and classic adventure of our culture and popular soul. In addition, it is an opportunity to enjoy listening to the classics: “Malevaje”, by the Orchestra Juan de Dios Filiberto , “Andate”, performed by Libertad Lamarque, “Milonga Sentimental”, by Mercedes Simone. In addition, Azucena Maizani is passionate about “La canción de Buenos Aires” and Homero Manzi's classic, “Milonga del 900” , a young Tita Merello dazzle with her mischievous and Alberto Gómez sing the hits of the duo Gomez- Vila.

As the newspapers of the time described “(...) more than a film, it is a kind of little cage within which the calandrias and the most notoriously mentioned thrushes of the native song sing, among which, naturally, some sparrow has slipped. But the truth is, it's nice to hear them sing.”