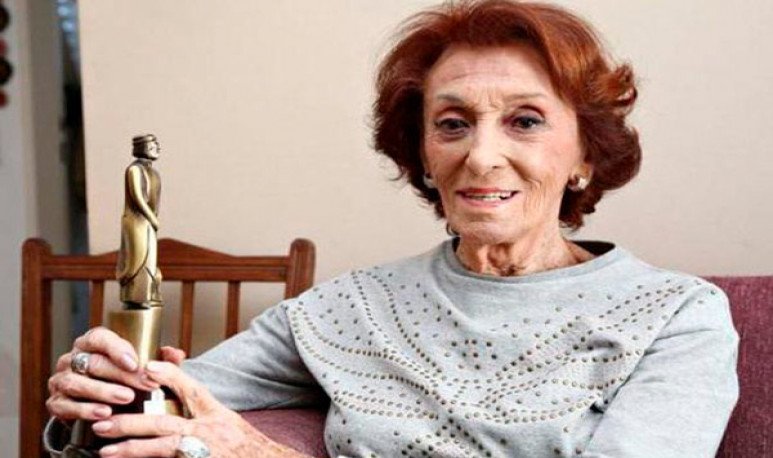 The name  Hilda Bernand  is directly related to an extensive career of various roles in theater, film, radio, television and radio theater:  born in   Puerto Deseado  ,  is a living story because on October 29 it celebrates 100 years of life , in the middle of the plateau of new people infected with coronavirus, where the saint is part of those who have overcome the disease.

At 99 he contracted  COVID-19 , he surpassed it and is already very well. His grandson, TV producer Emiliano Parada, said that “it could be said that this is the woman who beat him to death, because a few months ago she was also considered dead,” referring to the fact that, in March of this year, false news circulated on social networks about his death and his family and friends had to make it clear that he was in good health.

In 2015, the renowned actress received the Martin Fierro to the trajectory  for her works in  The Love has Face of Woman ,  Rosa... from afar, The strange lady, You will reap your sowing, Celeste, The successful Pells and  Malparida , among many more in all formats: that day stated that he would work until he was 100 years old, and not until he was 104 as he had released in an interview.

His last works were in 2013, before suffering a stroke  -in 2014- from which he came out with some sequelae: the soap opera  by Los Grimaldi  with Nazarena Velez  and, in theater, with  Posthumos  by   José Maria Muscari .

It is that suffering a cardiovascular accident is difficult: the actress had lost a lot of muscle mass and sensitivity on the left side, which caused her to wear a cane. The constant exercises, such as going out for a walk with his dog Antonio and with phoniatricians to return to exercise the face (mouth, tongue and jaw), were part of a new normal so that the sequels do not feel so serious.

The actress, having so much and a great career, has been recognized by different generations: the newest ones, understand her for her roles in the youth series of   Cris Morena  , in the case of  Chiquititas ; as the wicked warden (the most resonant role due to the extension and repetition of the strip), and then in  Floricienta , being the grandmother of the protagonist and antagonist, and in  Rebelde Way , as the most experienced teacher in the school. And the participations in novels starring  Florence Peña (La   Nanny ) or Mercedes Morán ( Socias ). Recognized not only nationally, but also in Latin America and Europe, often finding descriptions of her career in other languages, such as English.

Off-camera, the evil character who reincarnated many times in plays and soap operas does not exist.  Hilda is an independent and strong person, lonely too: although she is currently housed in a home for older adults, where she got infected, the actress with more than half a century of career likes to live alone in her home in Buenos Aires, perform leisure activities such as going for a walk, reading new booklets or books or give interviews surrounded by video tapes (thus demonstrating your transition from analog to digital!) of all his novels, goblins (who collected them), his dog companion Antonio, photos of his native  Santa Cruz  , prizes and family and friends portraits.

Happy 100 years to who studied at the  National Conservatory of Dramatic Arts , who had his first job at  Teatro Cervantes with the play   Martín Fierro   in 1941 and who later began to perform  radio theatres on  Radio El Mundo  and flew along with equally established great artists and directors like her.  Happy birthday, Hilda Sarah Bernand! You took longer than the firefighters in Palmira!