In an exclusive interview, the film director tells the background of his film, “From here to China”, and the series “Noche de Chine”, which is presented at Malba. 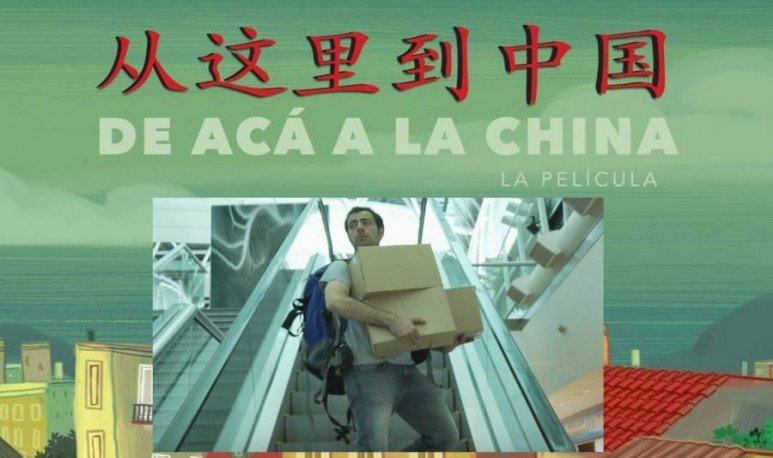 How did the idea of the film come about?

F. M. -The idea of the film came together with  Pablo Zapata  and  Julián Arenzon.  We wanted to make a documentary about the Chinese in Argentina. We were very curious to know where they came from. Why they choose Argentina and why they open supermarkets. However, when we started thinking about the script, the original idea (from the documentary) mutated into a fiction. The story of an Argentinean who, out of revenge, travels to China and puts on a supermarket. The story, the other way around. That idea was devoured to the original, and it was adapted.

S.A.  How was filming planned in China? How was the organization?

F. M. -Originally we were only three people, to film the documentary. Then, when we went to fiction format, we started adding people. Production and organization was raised with Pablo Zapata. We both decided to go to  Fujian , which is precisely the province where 85 percent of the Chinese who then come to Argentina live. We conducted the research and traveled there, where we had a contact, to make a basis. At first, we traveled 5 people: Pablo Zapata, Julián Arenzon,  Victor Torres ,  Ramiro Lago and me, who took care of carrying out the pre-production. Resources were scarce. We had a very narrow budget, without subsidies, but very willingly. And with that will and effort, we came out to produce the film in a month and a half.

How did you find the actors over there?

F. M. -A  Huang , who is one of the main actors we met him through friends. He lived a long time in Argentina and speaks perfect Spanish. He currently resides in  Shanghai . We contacted by email and asked if you were interested in helping us. Immediately, the answer was positive, accompanied by a photo of him, hugged to a grill. “Of course. I love Argentina. And I like the project,” he said. Then we met Momo, who is the other protagonist in the story, through  Eugenio Donatello . Donatello is an Argentine from the Buenos Aires neighborhood of Barracas, based in Fujian for 10 years.

F.M. -The rest of the Chinese participants of the shooting, who were the vast majority, we met minutes before the shooting of the scenes. We were fortunate to find a lot of people very predisposed and eager to help

S. A.  How did they manage to communicate with the language?

F.M. - We were three months in Fujian. During the first month and a half, which was pre-production without a translator, we managed with the help of some students who stayed in the same place as us. They translated the phrases we needed. For example,  “rent lights for a scene.”  Then they wrote us in a notebook “where we can rent filming lights” (Mandarin, of course) and with that we went out to the street pointing out the written paper, waiting for someone to tell us. That's how we did the pre-production for that month and a half. Then we were fortunate that Huang and his wife arrived for filming.

S.A.  What was the most difficult thing about shooting in China?

F. M. - Undoubtedly, the most difficult was the  language . But producing a film independently is also very complicated and doing it in China, even more.One of the most complex scenes was that of the ship, filmed on the Fujian coast, because it was a day of intense haze. Another scene that had difficulty was one that was filmed in a collective. He had 11 extras in a moving collective, and every time we had to repeat it, we had to take a different collective, with everything that implies. But it was achieved.

S. A.  How much did the original script that was finally captured in the film vary?

F. M. -We went with a script written from Argentina to China that we immersed him in the reality of China. And we planted a fiction film inside a documentary. Something like that was the final result of the adaptation of the script. The dramatic structure was already established, but it was enriched with the imprint of the people we met there and who participated in the film.

How long did it take in total to make the film?

F.M. - Seven  years took the whole process, until we showed it for the first time. The project began in 2012. We filmed in late 2012, early 2013. For a while, we were with the post-production. It took us a long time for the procedures for music permits. The film has songs by Antonio Ríos, Gilda, Piazzola, Los Auténticos Decadentes and León Gieco. With everything in order, we began to present it at different festivals.

S.A.  How was the mode of marketing? How did they take him around the country?

This was our first experience in making a fiction film and so was, in terms of marketing. For us it was quite a novelty to think, how we would get into the market. We started plotting the car. Then we got a projector. We bought a screen cloth and went out to tour ten provinces of Argentina for two months.

F.M. -We set up a  mobile cinema . The tour had more than 50 free screenings, in 50 villages inside, with an estimated 5000 spectators. We returned to capital very excited. The film had liked it very much inside. In Buenos Aires we ended up putting together an exclusive cycle, in a neighborhood club in Saavedra, Círculo Apolo, in Machaín and Crisólogo Larralde. “Noches de Chine” was led (half in Spanish and half in Mandarin) by a young Chinese from Fujian, who arrived in our country, to study tango. In the pre-film, she was interviewing some Chinese who came from Fujian. The interviewee told how he arrived in Argentina, when, how people received it, etc. In that context people from the Chinese community began to come to watch the film.

F. M. -The cycle  “Night of Chine”  was very well taken by the Chinese community, very successful for us, in terms of call. Then we opened some doors to the most important cinemas, such as the one at the Centro Cultural de la Cooperación and the  Museo de Arte Latinoamericano de Buenos Aires  (among others), where we are screening the film, every Sunday in January, at 20 hours, 11 hours ago months.

S.A.  What are the plans for the future?

F.M. -We are working to reach a Netflix or Amazon style platform, to buy us the film to end the cycle and be able to move on to another project we are evaluating.

For its filmmakers,   “From here to China”  was a fictional film experience, of endearing human value; above all, because “collaboration” made it possible.

For viewers, it is a story that excites, with swings that generate joy and also reflection. It lays a bridge between cultures, with issues such as immigration and emigration, uprooting, customs and tolerance towards others.