When? This Saturday 19 September by the streaming platform and will feature a 360º scenario. Safety pin. Buy your ticket now! 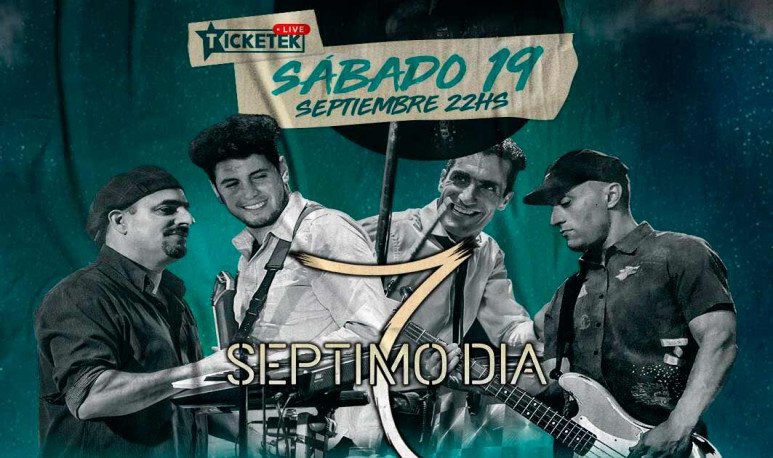 The Argentine band  Seventh Día  will give their first recital via streaming in Argentina and throughout the continent. The show will feature a 360 stage and will be this Saturday 19 September from 22 hours. Tickets are on sale at  https://www.ticketek.com.ar/septimo-dia/online .

Seventh Day is considered the most convening  Soda Stereo tribute band  in Buenos Aires since its inception, in 2017. A luxury to hear them.

The group, composed of  Juanma Benitez  (vocals, guitars),  Diego Borracci  (bass),  Sebastiglione  (drums, percussion) and  Diego Castiglione  (keyboards, programming) “broke it” during the summers of 2018 and 2020 and in the rooms of the”; happy city” as the local theatres Colón and Corrientes. He earned  records  in call and ticket sales for three consecutive years (2018, 2019, 2020) at the Jardines de la Villa Victoria Ocampo, with repeated performances scheduled with sold out locations (1500 spectators per night).

This training was born in the city of  Mar del Plata  in 2017, composed of the same musicians today. Professional musicians attentive to the smallest detail and that's what makes them great.

A brief  review  of the road traveled indicates that the quartet builds his career on very solid foundations. In May 2019, Juanma Benitez led the  Oficial tribute band  Soda Eterno (Created by former Soda Stereo keyboardist Daniel Sais) on their tour of Mexico, in cities like Monterrey, Mérida, among others. In August of that same year, the band made their first  show  in GAP, with locations sold out. Months later, the group took charge of the official closure at  the Beer Festival  in the Santa Clara del Mar spa in front of some 5,000 spectators, in February this year.

It's known that this new show is going to be different. It will not have audiences or tangible band, but reality indicates that we have to adapt to these  new times  in the best way. And why not accept that some things get to us through the screen. It's good too. There will be an opportunity to meet face to face again and  shake  your arms to the rhythm of music amidst a  crowd  of  fans .

There is so much talk about screens, about being connected through it; the good fortune of having technology available so as not to feel so isolated, not to lose contact with loved people and what we like to do; to study, to work and so on. it does us so good, it is also given through a streaming.

Soda Stereo  was a  precursor of this trend, in '96, when it became the first band to include an  interactive track inside from an album, in this case with his album of the Unplugged MTV, Comfort and Music To Fly. Also during that year, it was the first Ibero-American band to broadcast an internet concert for the radio signal Rock & Pop. Already at that time, the trio of “advanced” built music from virtuality .

What else to say... Impossible to miss this show! Finally, I leave you some videos to enter the weather.