As every year, the Harvest begins with the show of offering to the harvest and to the Virgin. The Blessing of Fruits arrives. 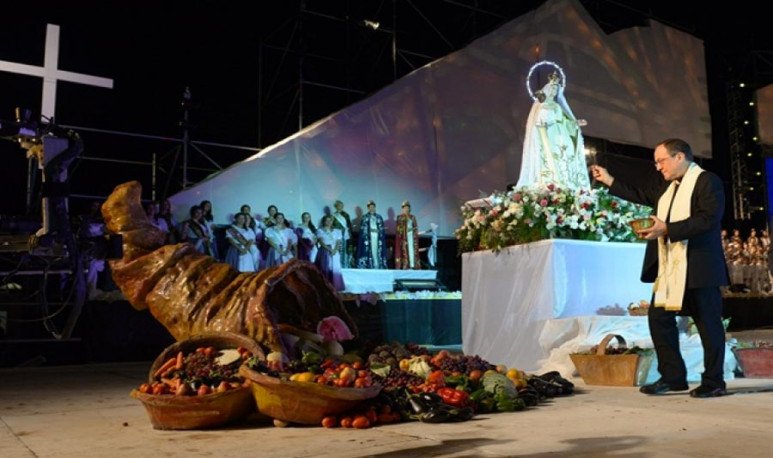 It is the show that opens the official calendar of the National  Harvest Festival . For a few years,  it has been conducted on a federal basis. That is, it is organized in different departments of our province so that all Mendoza have the chance to enjoy it.  There are musical, theatrical and artistic numbers in general. But, moreover, religion is intertwined with  viticulture .  A new harvest of grapes is appreciated and blessed . That's what the Blessing of Fruits is all about.

It will be on  Saturday 29 February, at 21, at the amphitheatre of Parque Agnesi,  San Martín  . The choice of the site in which the event will be held is an excellent way to approach many Mendoza our Harvest, since some have no chance to access the National Festival. It is a very symbolic ceremony, especially for the primary sector, for the small producer, the contractor.

It will be an ecumenical event and much of  the artists will be from the eastern provincial, especially San Martín. The idea is to add the talents of the department, with a huge tradition, in terms of its dancers and musicians.  On the other hand, it will be sought that the inputs required for this show, such as lighting and sound, also come from the east.

Start to the calendar

In this way, the Blessing of Fruits will give formal start to the harvest calendar, beyond the departmental holidays that have been celebrated. Next,  on Wednesday, March 4, will take place the Festival of the Harvest , in the vineyards of the airport, with Andrés  Ciro  Martínez and the philharmonic of Mendoza. Days later,  on Friday 6, the Via Blanca de las queens will be held . While, as usual, the main course will be served  on Saturday 7 March with the Carousel of Queens, in the morning, and the Central Harvest Act , in the evening, called this year:  “Sinfon í to blue for the new wine.”  Finally,  on Sunday 8 and Monday 9 March will be repetitions with artists such as   Los Palmeras   and Fito Paez for the closing.