Home People Spectacle A missionary tale, on the big screen of animation

“Fencero Nocturno” is the story of Sebastián Borkoski selected by INCAA to become an animated short film.

The red land  also has its prolific “Stephen King”. His name is  Sebastián Borkoski , a young writer who is conquering the big screen of animation. His story “Nocturnal faltrero” is in the process of becoming an animated short film. The project is directed by Elián Guerín and Maco Pacheco's art direction.

“ Nocturnal falconer” is a 2D animation that tells the enigmatic story of a magpie and her human friend . After an adaptation process, the  missionary  story was selected by the National Institute of Film and Audiovisual Arts ( INCAA ) in the category “Regional Animation Short Film”.

“When we read the story we decided to make this adaptation. From there we wrote a small script that we sent it to the National Arts Fund (FNA). Once we had the storyboard, we presented it to the INCAA and won the prize,” Guerín said.

“Nocturnal falconer” is the story of a magpie called Marconi and Omar, a serene, both accomplices of successive jewel theft. One of the wonders of this story is the parliament of the bird with Omar, in a state of jungle hospitalization. The bird spends it stealing jewels and takes them as an offering to man. The man obviously does not accept or return the jewels. But don't give the bird away either. So begins this mysterious friendship between a magpie and a human.

For his part, the cartoonist  Maco Pacheco  told a little about the process of adapting the story. “From taking the story we raised the same situation and the characters, but we were transforming it,” he explained.

As for the characters, the cartoonist revealed that they were based on the common missionary magpie. “In principle by photos and then we made a trip to Iguazu.  We spent a whole day studying magpies, doing photographic and film records  and I sketching to then give human gestures too,” he added. 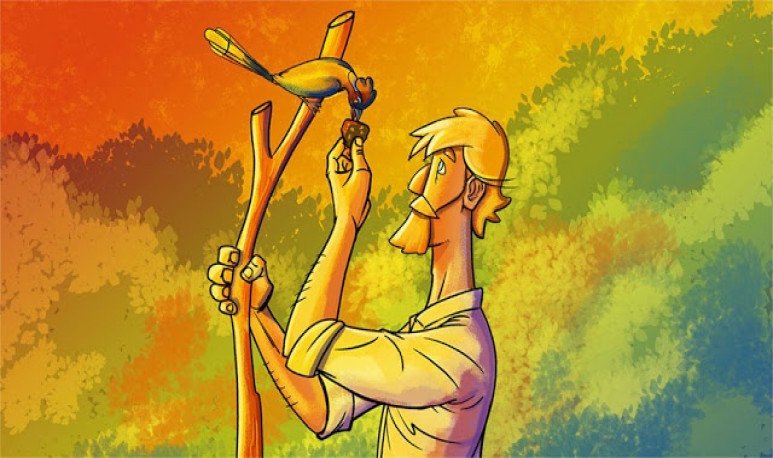 An animation pole in Misiones

Director Elián Guerín reported that the project enhanced the creation of an animation studio called Estudio 25/27. “We are planning to produce animation with illustrator Bubble Abián. Also, people from outside are connecting with our projects. We have another one presented to the National Arts Fund, which is called 'Birds in the Head'. This project also won and we aim to generate an animation and industry pole in the province,” Guerín said.