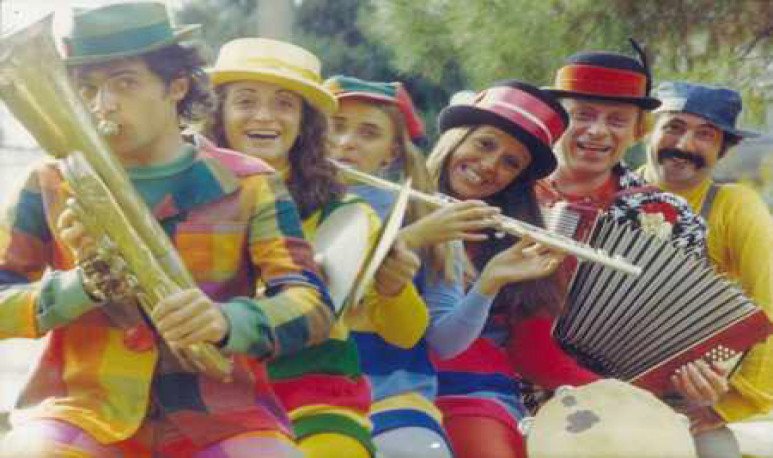 Being between 40 and 50 years old and having spent childhood in Santa Fe inevitably refers to  the shows for children that abound in the city . They were delighted every weekend. One of them was Los Mamelli, a group that mobilized and remains in memory and nostalgia.

Composed of artists and singers, it offered a show that the boys enjoyed, but adults also attended, enthusiastic about the successful reception of the public often.   The boys were determined to play songs, characters and juggling in their homes they had seen on stage . In this way, parents, older siblings, uncles and other categories of escorts, took the little ones over and over again, to the group's performances.

They began their activity in 1972, on Saturdays and Sundays, in the late “Noemí Café Concert”, a show format in vogue during those years. At 16.30 and filled the capacity of the place, “In the Circus World” began.  The turnout was surprised by a noisy band that appeared from the entrance , with the audience on their backs, performing their instruments and singing the song that characterized the beginning of the show: “Up the curtain, up the curtain, that starts the function & hellip;.. in the Mamelli World there are songs and pirouettes and smiles to lots...”

Already on stage, the artists,  deployed all their magic, achieving the immediate attention of the boys , who joined the songs, the dances and dialogued uninhibited with the actors who proposed conversations with them. Clowns, balancists, puppeteers and magicians immediately gained sympathy for the simplicity of their representation and simple colloquial language. The same happened with the songs of catchy melodies, which were memorized by the spectators, which allowed the active participation of the audience throughout the performance.

High quality at the service of children

Osvaldo and Hugo Maggi were the creators, directors, screenwriters and authors of music and songs. They had excellent local musicians, outstanding members of the Provincial Symphony Orchestra . Luis Rocco in flute-flute, Marcelo Gutiérrez on saxo-clarinet, Adolfo Villalba on guitar, Humberto Facal on bass, Luis Roggiano on percussion and Maggi himself on piano, among other top-level musicians. The production was in charge of Hugo Riom, a specialist in independent theatre, with the collaboration of Juan Carlos Rodríguez, F. Mónica Bono and Nenucha Rugio, ductile local singers, contributed the voice on a “recorded tape”.

In 2011, a staging was held celebrating Children's Day, in which songs by the Mamelli were recreated  and films filmed from their performances were screened. Once again and having elapsed decades since the group's cessation of activities, it was evident in this act, its profound professionalism and the great respect for children's public, which characterized them.

The words of whoever was its creator and director, the late Hugo Maggi, make it clear why I set up a children's show: “I do theatre for children, because I like them and because I am passionate and it involves a challenge. They have no nuances in their choice, things like them or not... I also feel  great respect for them as spectators and try to help them to be the future good receivers watching plays or painting, listening to music or reading a book.”

Other theatre groups for children have emerged in the city and exist today, but undoubtedly, the memory of Los Mamelli prevails and makes inevitable, without detriment to current artists , the comparison and oacute; n.