It has remained in force for more than 80 years. Older adults remember it, but young people live it. It's the mythical Cinema Theatre Imperial. 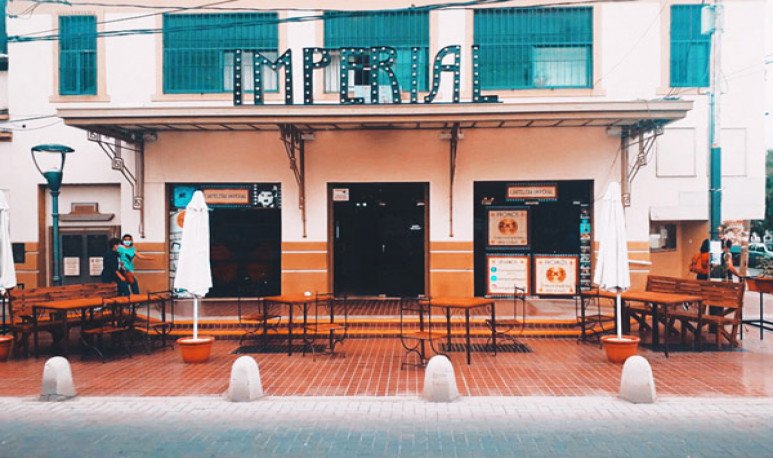 On the corner of Pescara and Perón streets , a few blocks from the departmental square, stands the emblematic Cinema Teatro Imperial, in  Maipu , Mendoza. The structure, restored and in force, awakens the memory and nostalgia of those who sat on their seats in the first half of the last century. But it also attracts culture lovers who currently enjoy  shows, shows and movies of high quality and with the most advanced technology.

The  original building dates back to 1932 , when a prestigious neighbor and real estate businessman,  Luis Schiavonne , decided to bet on a cinema, at a time in history in which it was enhanced.  This was from the fire that consumed part of the former Splendid Cinema.

But  in 1934 the main hall of the maipucinos was inaugurated.  In the best Cinema Paradiso style, as explained by its authorities. And it's true, the facade has a clear resemblance to the room of the mythical film. But, in addition, neighbors remember anecdotes and stories that thrill them to tears, to this day.

The original structure was divided, by 1980, by the sale of part of the building. However, the private who had acquired it, years later ceded it in comfort to the Municipality, to recover the Cinema Teatro in all its glory.

With the 1980 modification, only 300 seats were preserved. But today,  the cinema has 500 seats and 100 places in the lung sector with grandstands. It should be noted that the side seats with the original ones, with almost 100 years of history.  The pulman sector, located at the top of the main room has telescopic grandstands, which allow its disassembly and adaptation to the space, motivated by the need to change depending on the needs of the moment depending on the  activity .

In response to one of the most important demands of the people,  an expansion and refunctionalization of sanitary facilities was carried out to provide greater comfort to all present . Entrance ramps have been added and repaired for people with different capacities and building level improvements to achieve a widely inclusive space. Previously, the cinema possessed heating, but not cooling. As part of the  2013 restoration , all-new hot/cold temperature conditioning equipment has been included in all sectors.

With regard to the distribution of physical space, it has  a projection room, a main room, pulman, box office, terrace and café-bar. Each of these places has been designed in such a way as to offer an integral and orderly service at the time of projecting the works. An effective fire fighting system has also been incorporated, according to the regulations of the  Mendoza Firefighters . For which stiffeners were needed in the structure of the hallways to support the necessary hundreds of liters of water.  The floor does not maintain its original characteristics, since it is a porcelain tile, similar wood, which mimics the park it originally contained.  In this regard, in addition, we worked in the form of a slope to optimize vision, leaving aside the 1980 restructuring with spoon-shaped floors. Likewise, the central corridors were eliminated to improve the distribution of seats and the circulation sector has carpet to avoid  shoe  noises and studs that can disturb the public during the show.

The first to return

The Imperial Theater Cinema remained closed throughout the quarantine, although it did not stop working.  Every week theatrical and musical performances were held, organized by the institution. The first went with the artists performing from their homes and then musicians and actors took to the stage to work from there . Although, always, everything was streamed and never with a public presence in the room.

However, with the announcements of the permit for the reopening of cultural halls, Imperial is the first to have contact with the public again, although it works at 50% of its capacity, or less.