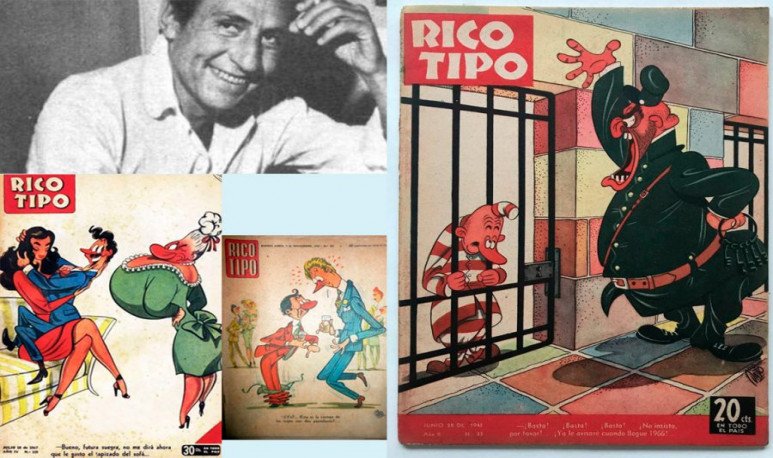 The magazine “Rico Tipo”, was characterized by a carefree style, bold comments and the presence of the “Girls Divito”.

In the 1940s and 1950s,  men's fashion  was influenced by “Rico Tipo,” a publication aimed at the  class  middle, which gave rise to the men's “Divito fashion”, which had nothing to do with the middle class. It was characterized by the use of a suit with crossover bag, very long, with large lapels, 5 or 6 buttons on each side but only one to fasten it. In the upper left pocket, a handkerchief was placed showing the tips, and a flower on the eyelet of the left flap. The dumped trousers, with a very high, 10 centimeter ankle, that fell on the footwear. The trousers were buttoned well above the waist and secured with a girdle 15 to 20 centimeters high, similar to those used with tuxedo. Squeaky tie  with wide  knot  and a metal bra. Hat “Orion” and black shoes with military heel.

It was a tanguera  pilcha  , neighborhood, used by the boys to go dancing. It was eye-catching and devoid of good taste. A famous character at that time, the boxer José María Gatica, was a full representative of this fashion, wearing eye-catching rings on his hands and smoking cigars.

The  hairstyle  was a la gomina, with pronounced jopo, like the hairstyle that the singer looked  Alberto Castillo .

The suit was tailor-made, by the neighborhood  tailor  or bought it ready-made, in the central businesses located in the  Corrientes street , in brown or navy blue.

The cartoons about women's or men's fashion published in the magazine “Rico Tipo”, were of great influence on the type of clothing used in the 1940s and 1950s in that  Buenos Aires  from yesterday.