The genre flourished in Argentina during the 1950s and 1960s and was the prelude to the soap operas we know today. 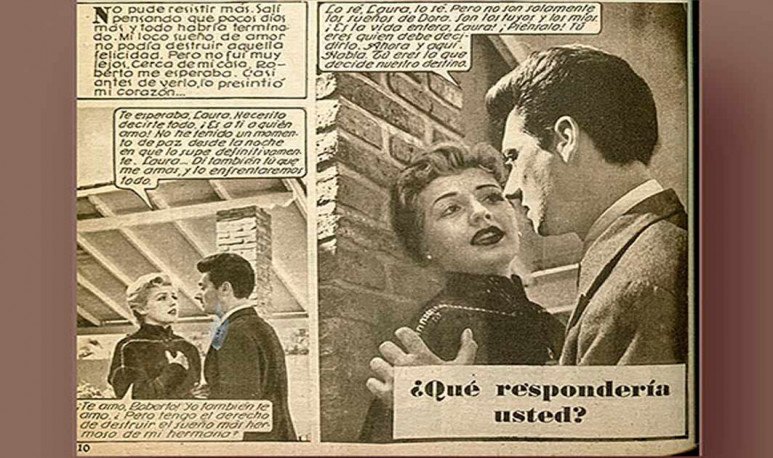 The  photonovela  was a literary story, illustrated with photographs containing balloons with writing, arranged in scenes that allowed the plot to be followed. Its validity was during the 50s, the period of maximum splendor, although its appearance occurred several years earlier, in 1946, in the magazine “ Sensaciones ”. In her most successful period, 12  magazines were published, highlighting Editorial Abril's “ Idilio ” as the maximum circulation, where the famous photographer Grete Stern collaborated, with her photographic montages on dreamlike topics. Also highlighted were “ Secrets ”, “ Sighs ”, “ Night ”, “ Fascination ”, “ Maria Rosa ”, etc.

The genre was  a  workplace during the period of deep crisis in national cinema. It was a few hours of well-paid work. Famous first-line  actresses  such as Graciela Borges, Elsa Daniel, Maria Vaner, Julia Sandoval, Marcela López Rey, etc. Among the actors were Fernando Siro, Enzo Viena, Carlos Estrada, Ignacio Quirós, among others. Acknowledged directors such as Leopoldo Torre Nilsson, Rubén Cavallotti, Kurt Land, Leo Fleider, etc. The contribution of writers was verified through Abel Santa Cruz, Nathán Pinzón, Wilfredo Jiménez, Eugenio Zaprieto. The Sentimental Consultorio was classic in the magazine “ Nocturno ” by  Tita Merello . He disappeared in the 1970s being replaced by the soap opera.