The 1970 film stands out for the ultra-modern photography of Rogelio Chomnález, the songs of Miguel Saravia and a montage with which the director exorcised so many spots on his back. 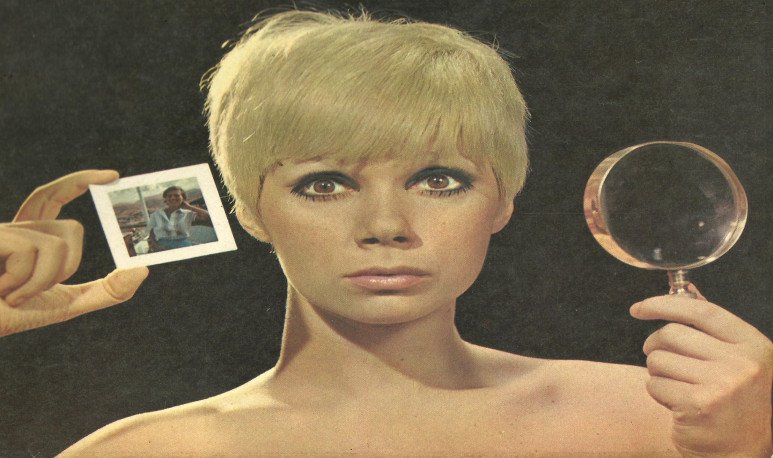 Fashion came from London. Beatles, miniskirts, long hair and multicolored clothes. Also a type of haute couture model and advertising. Among the Argentinean models of the late 1960s., Perla Caron  stood out for her expressiveness, makeup and haircut. Pretty soon he was an icon.

Advertising lived a moment of great momentum and popularity. The commercials that were passed on the four TV channels in Buenos Aires, were celebrated by the people. The advertising film directors then began to shoot feature films. In 1968, Juan José Jusidrealized the memorable Tute Cabrero. Hannibal Uset filmed in Madrid and precisely in London Che UFO. Perla was one of the protagonists there.

Néstor Paternostroiba a little further and from his experience, he raised a criticism of the consumer society and the woman object. The result was Mosaic (the life of a model) with Federico Luppicomo an alienated madmen and Pearl as the distinct young woman who is discovered and taken to be the best known face of advertising.

The 1970 film stands out for the ultra-modern photography of Rogelio Chomnález, the songs of Miguel Saravia and a montage with which the director exorcised so many spots on his back. It is one of those films that over the years has been revalued, leaving a portrait of the time and the world of advertising (another — in part — is Ricardo Becher's Tyre de Gracia, produced by Guillermo Smith).

The top media model was a figure that was also tackled in other feature films: in Spain with Fata Morgana (by Vicente Aranda) and in Brazil, with Bebel, Garota Propaganda (Maurice Capovila). In all, the protagonist ended up being absorbed by her own image.