He left Europe and settled in Argentina, noting that it was “a love at first sight.” 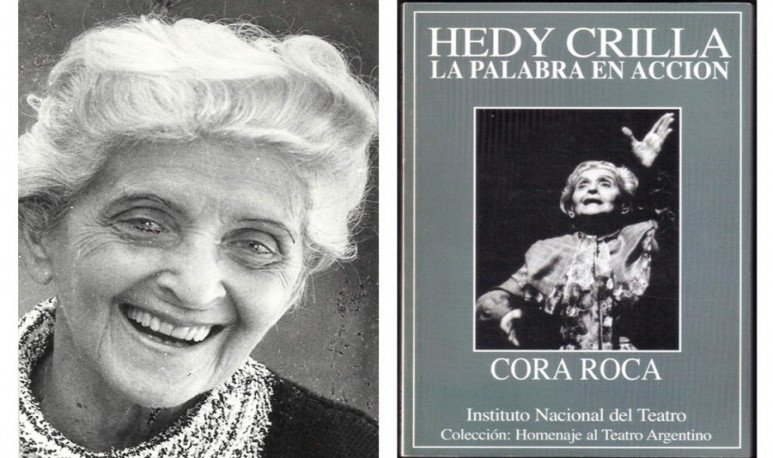 Hedwig Schlichter, known as Hedy Crilla, was born in Vienna, Austria, in 1898. He studied theater at the Vienna Conservatory and in 1920 began his theatrical career in Germany, along with renowned figures such as Bertolt Brecht, Max Reinhardt, Gustaf Gründgen and Carl Zuckenagen. He worked in Germany, Austria, Poland, England and France. He married Polish actor Anton Krilla.

In 1933 he fled to Vienna escaping Nazism and in 1936 he moved to France, where he remained until the arrival of the Germans in 1940.  He left Europe and settled in Argentina, noting that it was “a love at first sight.”

She worked in the German independent theater, as an actress and director, representing “The Sacred Flame” by Somerset Maugham (1941) and “Alert on the Rhine” by Lillian Hdlman (1942). She was hired as a feature actress by French cast stranded in Buenos Aires during World War II. He toured Latin America with Comedie Francaise, the companies of Dulcina Odelon, Rachel Berendt, Jean Tavera, etc.

He also taught classes and further training courses for French and German-speaking actors.  He began working in Argentine cinema in 1942 with “Ceniza al viento” . In 1948 “Tierra del Fuego” and “La Hostería del Caballito Blanco”, being his last participation in “El pibe Cabeza”, in 1975, totaling 13 films.

In 1945 he imposed the Children's Theatre Genre riding “Puntito y Antón” by Erich Kaitner. In different seasons she represented Andersen's “Princess and the Shepherd” and works of her authorship such as “My Teatrito”, “Las Aventuras de Andresito” and “Rosa, Rosita and Rosalinda”.

In 1958 she was summoned by the Independent Theater “The Mask” to work according to the guidelines of K. Stanislavsky. As a result, he directed “Candida” by G. Bernard Shaw, which earned him the Best Staging Award, 1959 Theatrical Critics Award, “A Burning Summer Night” by Ted Willis in 1960 and “Wraith” by E. Ibsen, in 1961.

The arrival in Argentina of the great American director Lee Strasberg, creator of the “Actor's Studio”, provoked the surprise of Argentine interpreters and directors, who agreed that these teachings had been learned several years ago with Hedy Crilla.  Among his students were directors Agustín Alezzo, Augusto Fernándes and Carlos Gandolfo. Among the actors Federico Luppi, Elsa Berenguer, Norma Aleandro, Lito Cruz, Jorge Luz, Maurice Jouvet and Eduardo Bergara Leumann . Hedy Crilla sought her students to achieve a deep, true and credible theatrical saying.

In 1960 he adopted Argentine citizenship.  In 1968 she was hired by the General Directorate of Artistic Teaching, as Professor of Stage Practice at the Teatro School of the City of La Plata. He returned to the theatrical performance in 1968 representing “La lierde” by Nathalie Servante; “Romance de Lobos” by Ramón del Valle Inclán in 1970 and in 1977, “Solo 80” by Colin Higgins. Her latest works as Director were in “Spring Awakening” in 1976 and David Edgard's “Mary Burns” in 1982. He starred in the television series “Alta Comedia”, Jacobo Langsner's play “Waiting for the float”. The Argentine military dictatorship considered that “Hedy Crilla, director of theatre plays, had an unfavorable ideological background.”

He died in Buenos Aires on 31 March 1984. Hedy Crilla, actress and actor teacher,  radically changed the history of the national theater , living 44 years in that Buenos Aires yesterday.