Home People Nostalgics Give him the water bowl coming!

At one time, in Santa Fe, as in many other cities in the country, to buy water you had to wait for the water to come. 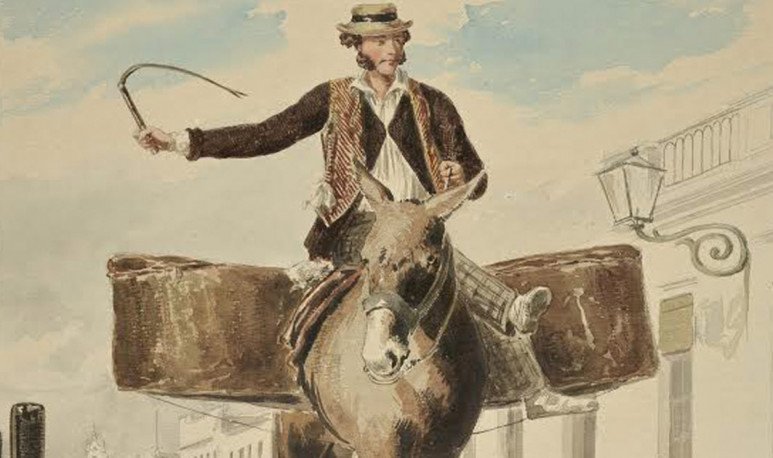 Water, water! El aguatero was a recognized  character  in the city of Santa Fe. He was the one who transported and sold water for different tasks at home. Inside the houses there were cisterns and brocal wells to  supply those families with the vital liquid . We're talking about the 1930s.

The water that was brought by the water tank was taken directly from the river. To transport it, he used a large barrel mounted on a rudimentary  carriage drawn by oxen or horses . The water was sold by “canecas”. They were  wooden measurements containing about 20 litres.  These containers were then replaced by cans. These involved, already, a whole revolution.

We can say that the water bowl was the first monopolizer of the distribution system of the vital liquid element.  He was the only one in charge of such a supply.

In some cities in Argentina, the aguatero had to be registered in one of the parishes in the sector in order to sell and transport water to neighborhoods. At the sound of his bell's buds he announced that the vital liquid was available on his mobile delivery man.

The satirical writer  Manuel A. Segura , in one of his comedies, talks about a waterman called “No Cendeja”, who belonged to the Parish of the Sagrario and, having been a military,  distributed the water martially , as it continued to use its already almost frayed uniform in that need.

The waterman  also had the ignoble office of being the executioner of the stray dogs , whom he'd finish with a rod he always carried with him. It was tremendous, but according to another municipal ordinance, thus prevented man's best friend from contracting the dreaded hydrophobia or  rabies disease, an animal disease so common at the time, by the canine overpopulation that existed.

With the passage of time, this custom had to be abolished because it represented a bloodthirsty spectacle .Seeing the water man decimating these  animals  on the right and left was a dreadful.

The only aaguatero competition came from heaven. Many people were supplied with rainwater gathered in the reservoirs, if they did not buy it from the watermen who brought it from the river, without filtering.

Years later, vaccines were invented and  the first water company was also created , reaching it directly to its consumers through the first pipes that were installed. With this  innovation, technology stripped the legendary aquatero of its work  . Like so many other trades, it became part of the history of an  era  that will forever remain in the memory of the Santafesinos.