Home People Nostalgics Get in Grandpa who's about to rain.

Sit with armchairs on the sidewalk and play on the street. Santafesinas customs that were seen even in the most central neighborhoods of the city. 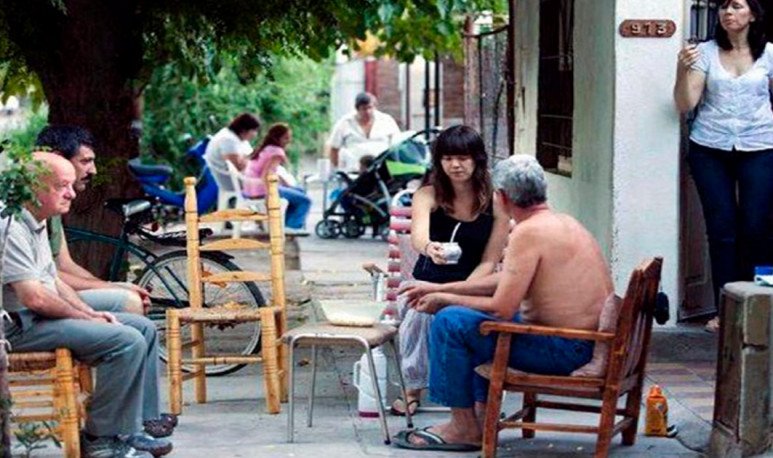 “Enter  Grandpa  who's about to rain!”. This is how many Santaphesinos express ourselves, when we want to warn that  something is about to happen . It is not a craving expression, nor arising from popular ingenuity, in reality it responds to  a situation that was common in summer afternoons.The custom, in Santafesino neighborhoods, was for the “elderly” people — that is, grandparents — who are not obliged to do any work at home or work outside their home, to sit on the  sidewalk , in each other .  wicker, hammock or fixed armchairs.  The children in the house , with the consent of the parents, who took advantage of the grandparents being able to monitor their movements, also went out to the streets. They, the parents, had occupations that did not give them the “recess” of previous or later  generations  . Dad worked and Mom would make dinner, iron while listening to a radio theater, or sew.

Walking down the street was winding a winding path that  dodged grandparents to the left in their armchairs and in any direction to the children . Then, pedestrians and tricycles (bicycles only went down the street), skates (there were no skateboards), girls jumping the rope that, tied to a fence, crossed the entire path to the cord, boys playing with the glass balls (which today the dubbing of the cartoons called “marbles”) or with cardboard  figurines  , which could well be replaced with caps from milk bottles. If  the horn of the ice cream shop was heard on the way , it was necessary to run to a safe place, because it caused an avalanche on the pedal cart to arrive first. It was not a matter of  finishing the tablets , which were the most economical and assured that they could reserve a few  coins  to buy again the next day.

Communication was the one from before

The afternoon passed in peace, as long as there was no threat of rain, in which case the children ran in, not without first helping the grandparents.

Mature people miss this tradition  that was part of the routine and relieved the embarrassment of the Santafesina afternoon. It also provided  an excellent means of communication  with the neighbors. It was an infallible resource to attract the attention of the family, sharing the latest novelty of the neighborhood.

Why do we say “strange”? Because, for a couple of decades, insecurity has taken over the street and sitting at the door represents a risk that no one is encouraged to take. On  the other hand, traffic has become so intense  in every corner of the city that it is not possible to imagine children playing carelessly on the sidewalk. For these,  electronic devices come to replace those  outdoor activities  with others that can be performed alone. They may not even know that in the house next door there are children of their age, with whom to share the sidewalk. But for the elderly, the habit of meeting neighbors has been lost.  It is not known who is new to the block  (whose appearance has changed with the proliferation of tower buildings) and often they do not know from themselves who has died. His children work and do not have time to be in the neighborhood news. And  the boys have no interest in knowing them , because their relationships are almost exclusively the ones they have established in school.

When you hear “enter the grandfather who is about to rain”, only the  survivors  of the Holy Faith of that time are the ones who know the true meaning that this expression contains.