And the word is well used, because the Head of Geniol has passed the decades and is approaching the century of permanence in Argentine popular culture. 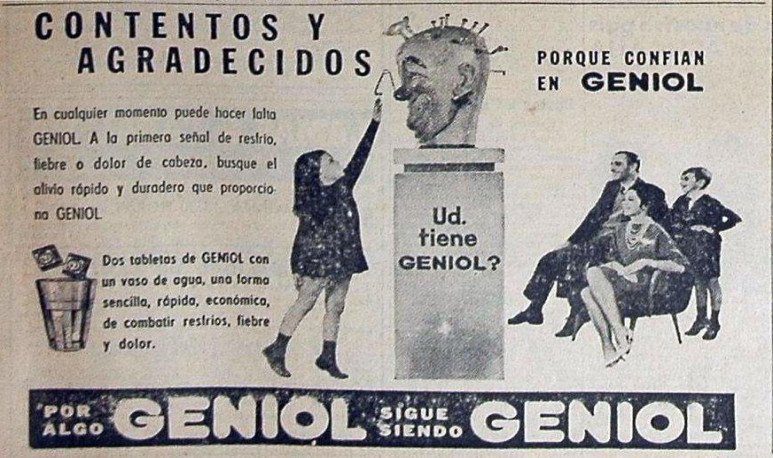 The story is known. The great French-Italian poster  Lucien Achille Mauzan  had to present sketches to a client and he kept him waiting forever. The artist, for revenge, caricaturized him, immortalizing him on a poster. And the word is well used, because the Head of  Geniol  has passed the decades and is approaching the century of permanence in Argentine popular culture. The original, he was smiling, with a haircut machine, which cut nails, corkscrew, screws and hooks on his head.

Some eventually saw him as a masochist, but the interpretation is clear: he smiles because someone is relieving him of his sufferings. The phrase on the poster left no doubt: Geniol cuts the pain.

Over the years, the figure was used in many ways by the agency Exitus. A very ingenious one was to play with the word Dolores and personify it in a woman. In many notices the bald man appeared without his nails, yes, always smiling. But something perhaps very remembered were the sculptural heads that populated Argentine pharmacies for decades. They even decorated the top of the delivery trucks (one of those giant heads is in the Museum of the City of Buenos Aires). Over time, they would become a collectible and replicated object, and proudly looked as a banner by pharmacists for decades.

But in the late 60s and at a time of modernization of the brand, the company (Laboratory Suarry at the time), decided to withdraw them from circulation. How was that? Trucks went through all pharmacies collecting the plaster or paste heads — there were of different quality depending on the time and the supplier — in an emula stock of Farenheit 451. Where to put them? In a warehouse, there was no place. Burn them? It didn't stop that much. La Costanera Sur, and its unneat filling, before wanting to be the Sports City of Boca, before the Ecological Reserve was formed, was the stage of the discharge. What happened to those heads is a mystery. Maybe the tide, maybe the surge.

What is certain is that the figure remains firm, laughing at physical pain and perhaps, this action as incredible as possible in Argentina.