Home People Nostalgics Climb the robot and conquer the world... or Paraná

We Paranaenses grew up playing in the robot of the Sirirí Duckling to the point of making tantrums if they didn't take us to visit it on Sundays. 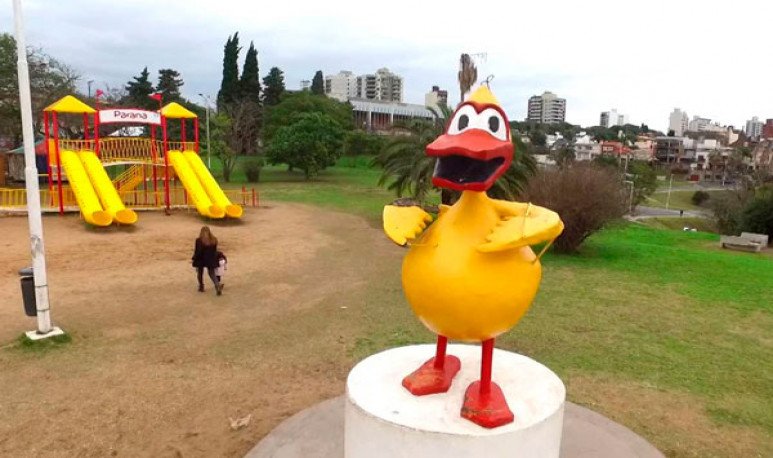 Getting to the place meant running to form a line to be able to climb it. Fathers and mothers sitting taking  mate  on their sides and watching that no one gets away.  The name of the park is Carmelo Cabrera, although we all know it as the Sirirí Duckling . This is due to its central and emblematic statue. It combines the Siriri Duck, a native Entrerriana spice, with the drawings of Daffy Duck and Donald Duck.  But let's go back to the center of this story: the robot . Embedded in the sand, with the size of a mutant next to our little bodies. His two extended  arms  called us to slide inside and end with the tail on the ground.

To play has been said

Yellow, red, sky blue... Maybe orange? Square-bodied, with iron barriers that protected us from heights. Uf, what courage you had to have to get up and not get dizzy on the way.  The  adventure  began taking steps down its staircase and, from there, deciding our  destiny   . We could just throw ourselves down the slides or continue until we get to our head.  There, the whole city was at our feet. We were the owners of the universe for a while and the greatest conquerors of  Paraná  . While we were doing it, we shook our families hands to visualize  tremendous feat . Which we carried out by the hand of  our brothers, cousins and  childhood friends .

It could also happen that we won some battle companion during the voyage. Small friendships that seemed to last forever, but vanished when the sun fell.  Today we can't go through its surroundings without feeling  nostalgia  playing inside . Since those times, our statures increased a little. So it's  no longer seen so immense, nor fearful . What yes, we still can't determine whether it is  a robot or a robot super duck . It's just that its beak confuses us and makes us fly our imagination.

A replica taken from a photo

The story of the robot of the Sirirí Duckling is very particular.  The children's game was originally invented in America and its name is “Giganta” . He was settled in the city of  Leavenworth, Kansas , and was removed because of its dangerousness. In the capital entrerriana,  the work was the result of a man's whim and the work of a group of railwaymen . To achieve this, they only used  a homemade photo  that had been taken during a trip.

Its  construction  was ordered in  1978  by the then  mayor of the city, Colonel Carlos Aguilar  . There, he commissioned the worker  Adelqui Macorig  to make a replica of what he had seen in North America. The means and resources to do so were scarce. However, the man started the project with his workshop colleagues and were able to recreate it anyway.  Manufacturing took a year and was placed in 1981, becoming the unparalleled symbol it represents for Paranaenses .

An extra fact is that  the game is not only found in Paraná . On the contrary,  it has several imitations in various Argentine localities , mainly in Patagonia. Although  ours  has its  special touch  :  duck bill  . A different way of identifying the village and representing the Siriri as a tourist figure of  Entre Ríos .