“Casa Lamota... where Carlota is dressed”, a store located in Bartolomé Mitre and Paraná. 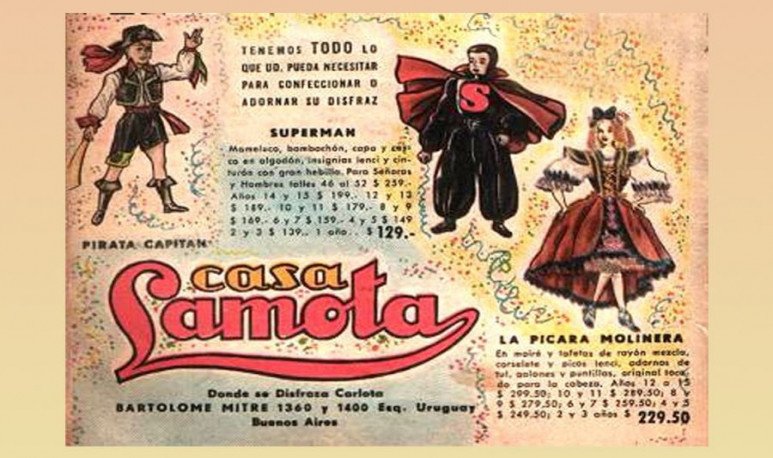 Radio,  newspapers  and magazines announced  “Casa Lamota... where Carlota dresses” , a shop located in Bartolomé Mitre and Paraná, where diverse clothes were offered, but especially, costumes of all kinds for both sexes, from two to fifteen years old.

They made traditional costumes such as the “Carolina Bear”, “Pierrot and Colombina”, which  sent on reimbursement  by rail, to the interior of the country. almost all of them. But he didn't just sell costumes. Children's sportswear, overalls, sun hats, sneakers, divers, were part of the stock available.

In the middle of the forties, I bought in “Casa Lamota”, the clothing required for physical education classes, at the High School. Prices were more accessible than in other establishments, which motivated the presence of a large clientele. It was a time with an important competition from the big shops, with a wide and varied assortment, which made up the most demanding clientele. The difference focused on the cost of the goods offered, which in “Casa Lamota”, was within reach of popular  classes  .

Wearing a cute costume provided the possibility of being chosen in the neighborhood corso, occupying a box of selected mascaritas, being photographed together, eligible for best costume awards and appearing in the publications of the neighborhood magazine. “Casa Lamota” gave many  neighborhood kids that possibility, in Buenos Aires yesterday.