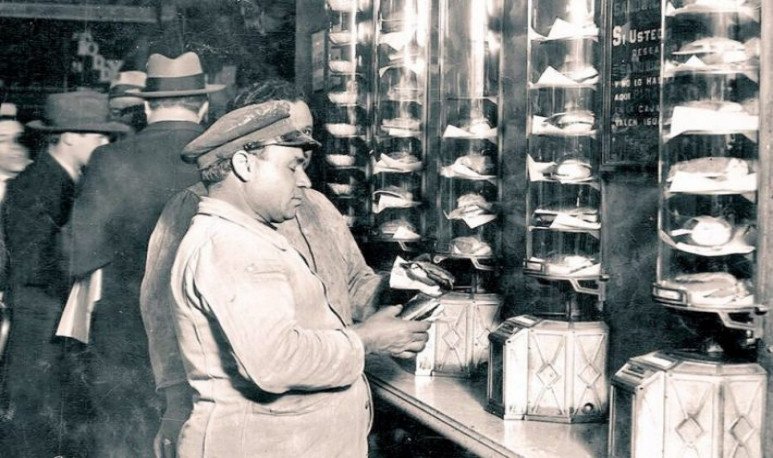 During the 1930s and 1940s, the system of the “Automatic Bar” was fashionable. It had as its history the “Bar Automat”, which appeared in 1907 and located in Bartolome Mitre 463.

It was not successful immediately, since almost 30 years had to pass for it to be put into effect. From the 1930s, its popularity increased, appearing a number of variations in the presentation of the so-called “hygienic lunch”. The most popular were those that had forms of vaulted glass cylinders with shelves inside and recessed into the wall. On each shelf there was a certain food:  milanese sandwiches, raw ham, mortadella,  salami  or cheese, or portion of potato tortilla. Crumb sandwiches,  patties , cheese and sweet,  frola pasta , various pancakes. A 10 or 20 cent coin was placed in the groove, a crank was turned and the chosen dish descended, which was extracted by a lower opening.

The success of this method increased the number of automatic bars and meals, with a greater variety on the menu. Glass cylinders were placed on walls that belonged to kitchens, so  soups were requested,  roast with fries, buseca, meatloaf,  meatballs , items that constituted for the most part the menu.

Its content was constantly renewed, according to demand. An employee opened a door and placed the chosen plate, on payment. For drinks, a similar system was followed with  bottles , although there were bars selling loose drinks, in glasses containing the same amount.

The bars located in Avenida de Mayo to 800, Galería Güemes, Rivadavia and Carhué, in the area of Liniers were famous. At the exit of the football courts and the racecourse, mobile automatic bars, mounted on buses or trucks, appeared with six to eight windows where sandwiches, drinks, empanadas and some desserts could be obtained. By the end of the 1940s, these precursors of self-service were disappearing.