Home People How we talk Tucumeños? This is how two Spanish youtubers reacted with Officer Gordillo

Through the anecdotes narrated by Officer Gordillo, which are part of his show, you will know the words most used by the Tucumans. Don't miss the desopilating video. 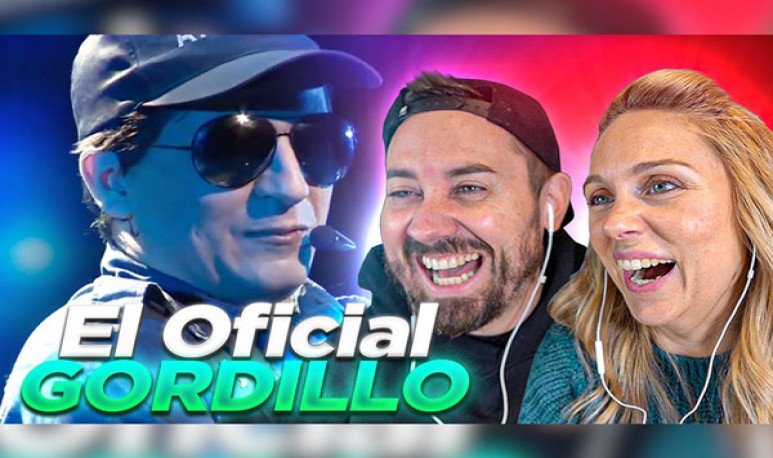 Miguel Martín, better known as  Official Gordillo,  is a  Tucumano  who has won not only the heart of all Tucumans, but also of the Cordovan public and the rest of the country.iacute; s. Recently, thanks to her artistic talent, she has conquered a young couple of Spanish youtubers who have watched their videos and made them public on her YouTube channel.

This is Nuria and Sebastián, a couple from Madrid who are dedicated to presenting videos that their followers propose to them, and this time it was tucumano Miguel Martín. With a long history in the world of humor,  Officer Gordillo  practically in all his performances always refers to the famous Tucumano  Milanese  sandwich.That is why the Madrid couple were encouraged to prepare and try it in full video. Of course they did not look the same as the original, but the Tucumans approved the initiative of the youtubers.

But what the Tucumano public may not approve was when Sebastian sent a greeting to the “Tucumeños”. Automatically, Nuria corrected the word and said “tucumanos.”

At the beginning of the video, we can see that Sebastián comments that Official Gordillo's video has been the most requested by his followers of his YouTube channel, and in the next scene he appears tucumano thanking the Madrileños for the reaction to his video and also for the fact that they are going to nail a sá; ndwich from Milanese, although doubts that they will turn out the same as the original Tucumano delicacy.

Then, when the Spaniards stop passing the video of Officer Gordillo and resumes the camera to them, Nuria asks what Tucumán has, in this context, Sebastián refers to the milanese sandwich, which is undoubtedly the most characteristic food in the province. And that is why Officer Gordillo honors him in all the shows he does, whether they are those he has carried out in  Tucumán , in Córdoba and in the rest of the country.

Once the Madrileños finish making the tucumano sandwich and try it, they recognize that it is a delicacy and are even encouraged to give it a score from 0 to 10, although they prefer to rate it with an 11. In this way, Nuria was delighted with the humor and sandwich promoted by Officer Gordillo, she even said that her next trip in the future will be to Argentina and especially visit Tucumán, as she wants to try the authentic Tucuman milanese sandwich.

After tasting their Milanese, the couple decided to see the presentation of Miguel Martín and Nuria realizes that  Officer Gordillo  speaks differently than the rest of the Argentines and wonders about it, to which Sebastián responds that the Tucumans speak, who have a characteristic accent.stico.

Many Argentines agree that Tucumano humor is special, and Miguel Martín takes care of it in all his presentations. With anecdotes from his childhood, his memories of his native Famaillá always makes his audience die of laughter. Now he has achieved it with this couple from  Madrid  who have not stopped laughing in all the reproduction of the video. With every story that Martín tells with his characteristic speech of “basic tucumano” and his charisma that characterizes it, in Tucumán this character has become a symbol of humor.

Faced with so many bad things that has thrown the pandemic, where Argentines have seen each other with a humor more down than up, maybe it's time for you to laugh a little, and for this we leave you the next link so you can enjoy the desopilating video of  Official Gordillo  and you can laugh laughing laughing with your family. Also, you will be able to know words and expressions typical of Tucumans.