Some of the expressions that are already naturalized in our speech have an origin that is based on real events, not far away in time. 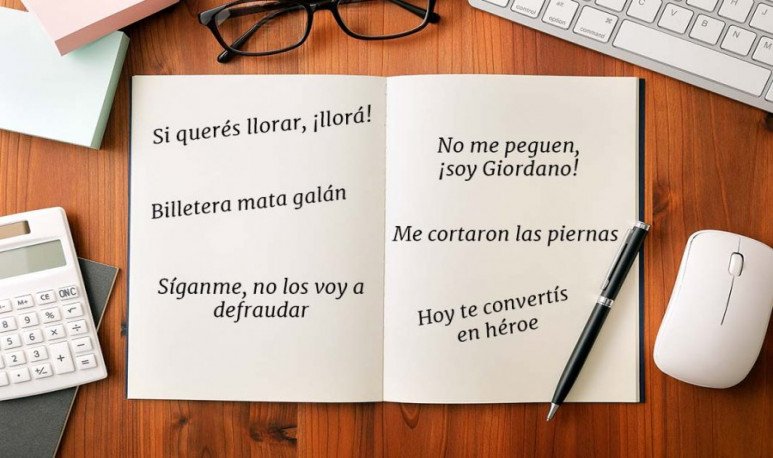 If you want to cry, cry!

Crying is good, and  Moria Casan  has known it for years. This phrase, which we still hear from each and every time, is his own. He used it frequently in his talk show  Between Moria and you  to encourage participants to express their emotions in front of the camera. In case you didn't know, this one, like other expressions, is patented.

In the 90s, TV was a parade of characters as amazing as they were real. One of them was  Jacobo Winograd,  the author of  this phrase . What does it mean? That a man's money is more important to women than his face. We'll have to see how well Jacobo did in that area...

Carlos Menem  had many flaws, but no one can deny that he was very good at making catchy phrases. With this campaign slogan, the former president encouraged Argentines to elect him at the polls. How did that end? We all know...

A phrase with a sad origin, which became a classic. In 1995, at the departure of a  superclassic  at Monumental,  Roberto Giordano , the fanatical stylist of Boca, was attacked by River fans in the parking lot. To avoid the beating, he first said his mantra: “Don't hit me, I'm Giordano!”. Unfortunately, it didn't help him much.

They cut off my legs

Maradona  is another great creator of famous expressions. This is one of the most exciting he said, when he was expelled from the 1994 US World Cup for an anti-doping control. Even today, we continue to use it every day when someone leaves us completely without resources.

Today you become a hero

Closer in time, and also to football, is this phrase by  Javier Mascherano . We will never forget that moment: before starting the penalty round in the semifinal of the Brazil 2014 World Cup, against Holland, we all read on Mascherano's lips that phrase. The recipient? Sergio Romero, the goalkeeper of the team who, on that day, effectively, became a hero.

Provolo: the most aberrant case of abuse in our history