Home People How we talk Forget and rescue yourself

On this journey through the Santafesino dialect, we delve into two very peculiar terms: forget and rescue yourself. 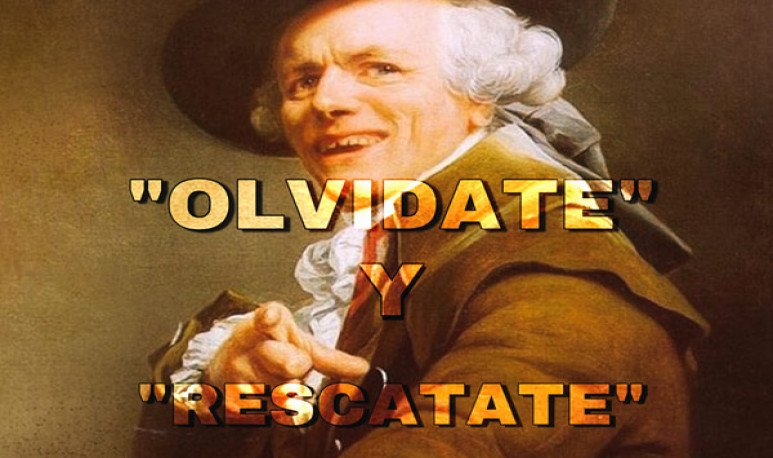 Rescue  and  forget are expressions  that may not be entirely Santafesinas. But they are  widely used in our environment , first of all, in a rather marginal area. As happened with many other words we shared in previous installments, their use in everyday Argentine speech was remarkably normalized. As with words from other languages, they are terms whose  meaning can vary greatly depending on the context.   I think explaining these differences to someone who wants to learn them by coming from another country can be an impossible mission. The  fact is that their connotation can be practically opposite,  depending on how they are used. Let's look in detail this feature of tumbera, villera or popular-youthful jargon.

Rescate is a term that became popular throughout Argentina, coming out more than anything from the “villero environment”. Sow is accompanied by an “old” or “cat”. “Hey, rescue yourself, cat,” “Rescue, old lady,” “crazy, rescue yourself.”

Let us now look at the complexity of oral use that arises when we talk about rescuing oneself.  “ Old man, rescue yourself, you can't keep drinking like that. You're going to faint from the fart .” In this context, someone is clearly being recommended to rescue. Put the batteries on. Don't be so drunk. It is a rescue from the point of view closest to the dictionary meaning of the word.

But let's look at this other alternative, widely used in the neighborhoods : “Hey, buddy, rescue yourself and leave a coin for the kids.” Or, “Crazy, rescue yourself and canutate a whiskey there from your house to drink with the lazy.”   In this case, rescuing yourself is a synonym of “do not wear your cap.” It's not being ortiba. And this is accentuated in the last example:  rescuing can be even stealing , transgressing the law, just as long as you do something the boys are asking you.

This bipolarity in the use of the same word is further accentuated in the case of the so fashionable “forget”.  Depending on the context in which it is pronounced, this word can literally mean the opposite.   Teaching it to a foreigner can be an extremely difficult task here. But there is no better way to explain it than with examples that are heard daily in Santafesino dialogues.

Two friends are talking. At the end of a dialog, one recommends that the other, when they see them again tomorrow, return the toolbox you lent it. The other one answers him like this, “Forget, you have it here tomorrow morning.” This would be the most “classic” use of the term, so to speak. Again , it is the one that fits most to the real meaning of the idea of forgetting . The beneficiary friend tells the lender to stay calm, that he can forget that he lent him the cash. You don't have to worry about that, because soon you'll have it back.

How is it then that the same word can be used in the diametrically opposite sense?   Let's go to the example:

Two friends talk about the boy who writes messages to one of them, with non sanctas intentions.

One question: “And? Are you going to answer him? ”.

Undoubtedly, the significance that forgetting in this case acquires is the opposite of the previous one. It's a  forgot  that he keeps a piece of phrase tacitly: “Forget that I'm going to answer him.” He could also have said, “I don't even fart answer him.”

Curiosities of everyday santafesina speech  which, sometimes, is good to get to analyze. Out there, one day, you have to become a teacher of the Santafesino language for a while